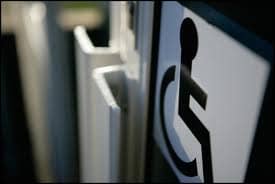 An Armagh City and District guide on wheelchair access to local facilities is to be carried out, at a cost of £20,000, over the next few years, Armagh I can reveal.

DisabledGo has been appointed to conduct the work over the next five years.

The decision was taken after considering a recent report, outlined to executive committee councillors by corporate services and governance director Carol Corvan,

UUP Councillor Sylvia McRoberts said disabled access was a big issue which needed to be considered when marketing buildings.  She asked if DisabledGo were working with other councils.

The Strategic Director explained that they were working with a number of councils, including Belfast, and she was aware they were conducting a series of meetings with other councils. She also explained that, following discussions with DisabledGo, it was felt that the three councils in the Armagh, Banbridge and Craigavon cluster could easily join together following RPA, whereas proceeding on a three council basis at this stage would delay the process.

SDLP Councillor O’Hanlon noted the cost of approximately £20,000 and asked if this was a guide or an audit. The Strategic Director explained that it was an audit from which a guide would be an output and would include engagement with local community, disabled groups and business owners. She stressed however that the objective of the guide was to inform disabled people what to expect, so that they could make informed choices, but would not make specific recommendations for improvement.

She listed from the report what was included in the fee and added that future planned development included provision of guides via mobile ‘apps’.

Councillor O’Hanlon asked if Disability Action had been contacted but Ms Corvan explained this approach would require a lot of officer time and resources which the council would not be able to provide.

Councillor O’Hanlon suggested contacting Banbridge and Craigavon councils to see if savings could be made by including the three councils in the proposal.

DUP Councillor Terry McWilliams remarked that it would look bad if Banbridge and Craigavon Councils proceeded and Armagh did not. He felt that it would be good to see more detail and examples of how the guide would work.

SF Councillor Mary Doyle remarked that council officers would not have the expertise to carry out this work. She supported the proposal and felt that the cost was quite reasonable considering how much work would be involved. She added that this issue tied in with the equality matters referred to in a previous report.

Councillor O’Hanlon said he did not disagree with the proposal but wanted to make sure the council got value for money and that the process was done effectively.

The Strategic Director explained that the proposal would bring many benefits to the area and, whilst she noted Councillor O’Hanlon’s point regarding use of local services, resources would not be available to go down this route.

Councillor O’Hanlon pointed out that the recommendation referred to entering a five-year contract but Armagh City and District Council would not exist after 2015.

Ms Corvan said the agreement could be transferred to the new council.

It was agreed at the executive committee to procure the services of DisabledGo as a single tender action for a 5 year agreement for the production of a city and district wide access guide.

Discussions with Banbridge and Craigavon Councils will be carried out too to explore if a joint agreement is feasible.

The number of venues to be included will be agreed following initial consultation events with local disability and community groups.