Armagh reporter – A pun king worthy of the crown 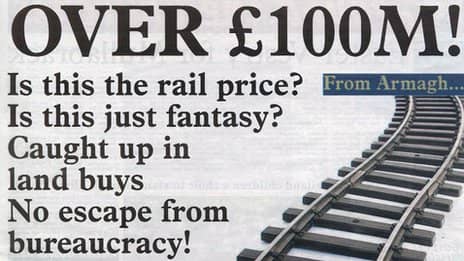 If you recently found yourself head banging your way through an article about a department for regional development consultation paper rather than yawning you were probably reading the Ulster Gazette.

Getting a gripping headline out of a story like that might have been a tough chore for most journalists.

The Gazette, however, ran with “Over £100m! Is this the rail price? Is this just fantasy? Caught up in land buys, No escape from bureaucracy!”.

In case you’re one of the few people reading this who doesn’t recognise that ancient call to prepare to bang your head up and down, here are the first few lines of the fabled Bohemian Rhapsody by Queen:

“Is this the real life? Is this just fantasy? Caught in a landslide, no escape from reality”.

The Ulster Gazette’s deputy editor Richard Burden is the man responsible for that outstanding bit of glam rock pastiche. He spoke to BBC News Online.

“I just always liked to do that type of headline. If there’s a film, a song, a lyric – anything that springs to mind and it lends itself, you’ll try to fit the words in round it,” he says.

But why choose Queen’s Bohemian Rhapsody? Is it some deep and meaningful commentary on Danny Kennedy’s plans for our rail network?

“They’re my favourite all time band, so it was an obvious thing for me.

“It’s one of those iconic songs, the tempo and the lyrics lend themselves to the headline. You recognise it right away, it’s not an obscure song, I think it’s pretty obvious what it’s on about.

“Campaigners in Armagh might say that the amount of money involved or suggested doesn’t add up and it just lent itself to the lyric, you know – is it a real price or is it just fantasy?”.

Richard and the Gazette are no strangers to the art and science of witty headline wrangling.

“I like to do unusual headlines, something that catches the imagination; it gets more people to read the actual story,” he says.

“There’s no point telling the whole story basically in the headline, because then there’s no need to read what comes after it.”

Richard seems most pleased with his newest baby, but there are a few past masterpieces which would do any hack proud.

“We had one story on an upturn in Christmas sales. The headline was The Tills Were Ringing Out For Christmas Pay.”

“Asda had been interested in acquiring the former Drumadd Army Barracks and decided to withdraw from that as Tesco had expressed an interest in town, the obvious one there had to be Asda la Vista. It’s a bit of fun, but it does get people talking.”

When covering a controversy over Armagh council increasing parking charges at one of their facilities, the Gazette dubbed it The Charge of the Tight Brigade.

A debate about introducing a one-way system around the Mall in Armagh gave Richard another chance to dip into his big bag of lyrics.

“That had to be One Way or Another, obviously going for the Blondie reference.

“We’ve had a lot of toxic waste dumping and that going on around south Armagh. There was one at Carnagh forest so the headline there was Forest Dump.

Richard admits that sometimes, he’s had to sacrifice his art for the greater good.

“There’s probably a few that come close to the knuckle. We’ve looked at it and we thought ‘oh no we’ll not go ahead with that’,” he says.

“You have to ask yourself too: is it offensive? Will people take it the wrong way? You make a collective decision.”

Among some of his greatest hits, Richard recalls:

A story about a schoolboy from Tandragee who set up his own online firm at the age of 10. “The headline we had on that was Smarter For 10, harking back to University challenge,” Richard says.

On reporting about flooding problems: “The obvious was Floody Hell, which we didn’t go with for that one.”

People queuing up early in the morning to get sandbags to protect their premises became Sandbags At Dawn.

In Aghory, County Armagh, people opened up their home at Christmas time, inviting people in to raise money for charity. The Gazette headline? Ag-ho-ho-ho-ry!:

“We were giving the minister the opportunity to respond – he was going to write a platform piece. He couldn’t help commenting on the headline – he admitted he thought it was very good.

“It was very nice that Danny Kennedy would concede that he was quite amused by the headline himself.”