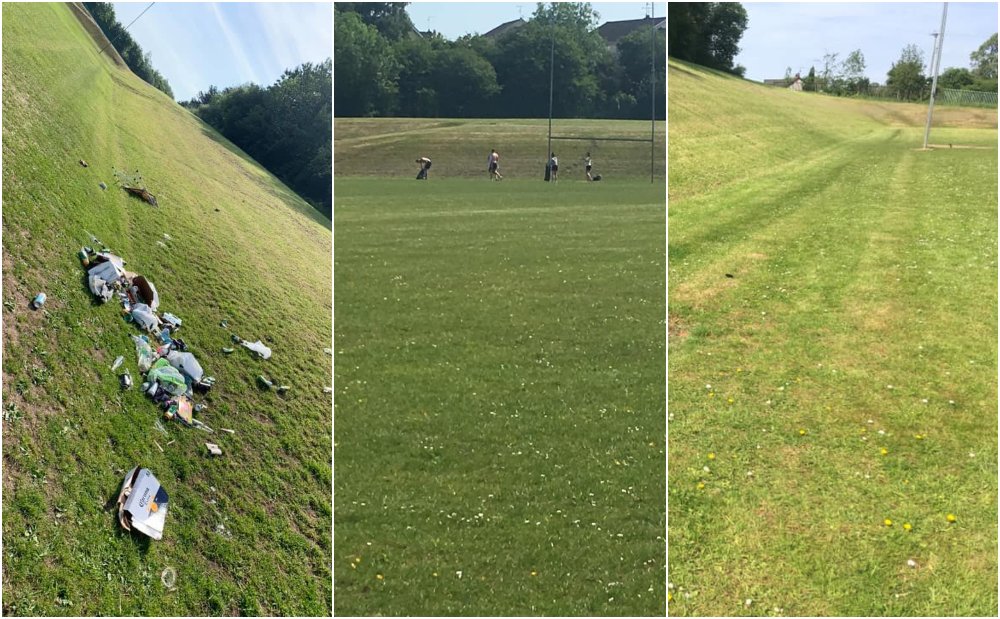 A city councillor has praised the actions of young people who returned to clean up the College playing fields in Armagh after a Saturday spent in the sun.

The appearance of rubbish and bottles had brought criticism when shared by some across social media platforms on Sunday.

The photographs showed the area – off the Moy Road in Armagh – littered with empty drink tins and bottles and general rubbish.

But later on Sunday, Sinn Fein Councillor Jackie Donnelly praised the efforts of the young people who returned to clear the area.

She shared her own pictures of the clean-up on social media and commended them for their actions.

She said: “As a local councillor here in the city I would like to commend our youth during what has been a very difficult time, a time when they should have been preparing for end of school parties, formals, birthday milestones, first friend holidays etc.

“Covid has brought all their plans to an abrupt standstill. Thus far they have been very good in adhering to all the guidelines.

“I was happy to help a group of young adults early this morning who returned to the College fields with bags to gather their rubbish from the night before. We had a few parents joined us also.

“Not only did they clean their own leftovers they cleaned the entire area.

“The maturity our youths displayed this morning shows what can happen when we educate and lead by example.

“No harm done and College fields left spotless. Well done lads and lassies and let’s remember – We were all young once.”

Elsewhere, there were concerns raised by Armagh City FC on Saturday and calls for parents to know where their children are.

On this occasion, it may not have been a matter of leaving behind litter, but rather gathering to play football.

The club said 22 young people had been asked to leave after trespassing on its property.

“Our grounds are locked up under the government guidance,” the club said.

“Football play is not currently allowed with anyone outside your household. So parents please remind your kids of this.

“Police are now in the area.”