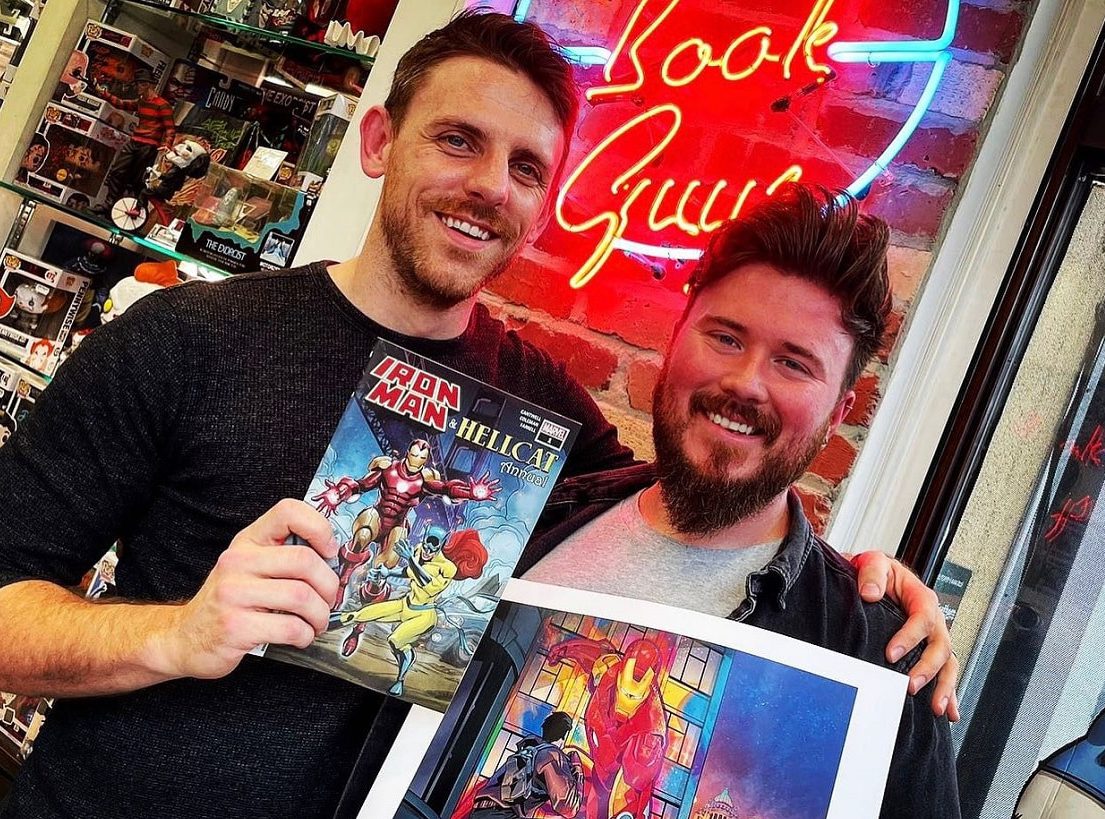 When it comes to jobs, Armagh man Ruairi Coleman is living the dream.

Ruairi draws comic superheroes for a living, all from the peace and quiet of his office in the back garden of his home.

The 38-year-old, who was a guest at the recent Comic Con comic book and film convention in Belfast, has worked for Marvel Comics and DC Comics – creators of superheroes such as Superman, Batman and Spiderman – for the past 10 years.

And next week, his own comic book, Astonishing Times, will be released. It came about after two writers from Texas reached out to him during the pandemic, with a second series planned shortly.

Ruairi, who is originally from Lurgan, has loved drawing from as far back as he can remember, with Spiderman, Batman and the X-Men his favourite superheroes. Some of Ruairi’s work

“My grandfather worked for a printing company in Lurgan and he used to bring home reams of paper which he would staple into a book. My mum would give me a dinner tray piled with paper and pens and pencils and I would sit in front of the TV or in my room drawing my own comic books,” he said.

However, despite this, the route to his dream job was a roundabout one, with Ruairi opting to do a degree in psychology followed by a course in counselling after he finished school.

“I was doing work experience as part of my counselling course and I kept being told it was difficult, not very well paid and there was no promise of a job at the end of it,” he said.

“That was exactly the same people had told me about working in comics, so I thought that if I was going to do one of these things I might as well do it for the one I had wanted since I was a child.”

After quitting the course, Ruairi worked in the Civil Service and retail before obtaining a HND in Graphic Design.

“About 10 years ago I had learnt more about comics and how they worked and I started submitting my work to publishers,” he said.

“It looked like it wasn’t going to happen for a while but it has panned out for me.”

Although the nature of the work means it can be a “famine or feast”, Ruairi has been steadily building his contacts and network and is getting more and more work from Marvel and DC.

This year, for instance, he started out working for Marvel and drawing an Ironman comic.  He has also drawn Spider-Girl and is currently drawing Superman for DC Comics. He works in black and white, with other artists colouring the drawings and putting the word balloons on.

The comics he works on are mainly monthly titles and are usually sold in niche shops such as Comic Book Guys and Forbidden Planet, both in Belfast.

With two young children, Nora (3) and Lochlainn (1), Ruairi has disciplined himself to try and work within 9am-5pm hours rather than the 12-14 hours he used to put in.

From originally starting out with pens, pencils and paper, he now mainly uses a computer, which essentially means he is drawing with a pen on a screen, speeding up the entire process.

For Ruairi, one of the highlights of Comic Con was getting out and meeting people.

“Once my wife Nicole and the kids leave in the morning, it’s just me out here working. It’s a very solitary lifestyle and you kind of forget that you are drawing characters that people have a real affinity for,” he said.

“At Comic Con there were people bringing their kids and a lot of parents were showing me their children’s work. To be able to encourage them to stick at it was really good and just seeing the goodwill and level of interest in comics was brilliant.

“Knowing they are connecting with what you do reinvigorates you. I came away very grateful to have the job that I’ve always wanted and to know it impacts such a diverse range of people.”