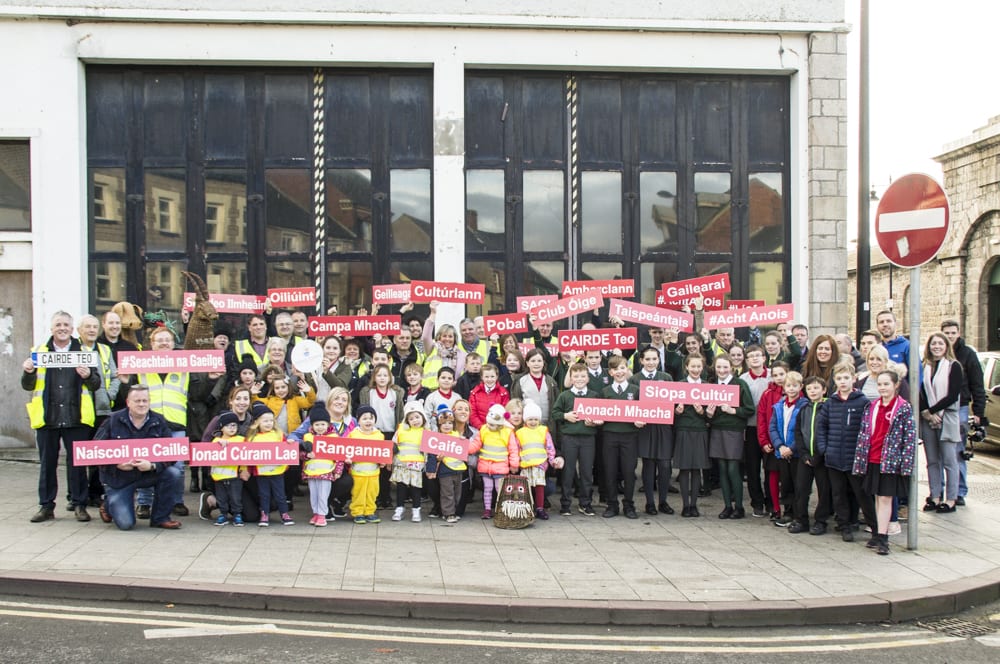 Work will start next month on the new £2 million Irish language cultural centre at the site of the former fire station in Armagh.

It is expected to take a year to complete and comes after a decade of planning and preparation.

The Aonach Mhacha Capital Project was officially launched on Friday at the site of the new development at the Shambles.

Director Gearóid Ó Machail told Armagh I the state-of-the-art centre will be a “beacon for cross-community and cross-cultural understanding”.

It is the culmination of years of voluntary effort, mutual cooperation and widespread community support which has finally borne fruit, according to those leading the project.

The announcement comes as a contract is due to be awarded for the demolition of the former fire station in the Shambles and the subsequent erection of the new facility for speakers and learners of Irish.

The project is sponsored by the Department for Communities who are providing the majority of funding for the project with additional funding and loan capital also coming from Ciste Infheistíochta Gaeilge, Ulster Community Investment Trust, ABC Council, Iontaobhas Ultach, Naíscoil Ard Mhacha, CAIRDE Teo and Gael Linn.

It was in 2008 that Aonach Mhacha Director Gearóid Ó Machail – then employed as a Neighbourhood Renewal Development Officer with Armagh City and District Council – organised a public meeting in the Market Place Theatre.

The idea was to gauge the level of support for a dedicated Irish language centre in the historic conservation area of the ancient capital of Ulster.

He told Armagh I : “It was a very vague concept at the time and the meeting was arranged in response to the rapidly growing numbers of families in Armagh who were enrolling their children in Irish medium education.

“The demand for services in Irish was on a definite upward trajectory and a number of organisations and individuals were attempting to meet the need with little or no statutory support.

“The response to that meeting was overwhelming and, in consultation with my close friend and colleague Réamonn Ó Ciaráin, Regional Manager of Gael Linn, we decided it was high time that Armagh City had its very own ‘cultúrlann’  – Irish language and cultural centre.”

A range of services were envisaged for the new centre including classrooms, craft studios, performance and exhibition space, a gift shop and café, conference rooms, culturall enterprise incubation units, a media suite and a day care facility for children and families.

“This has remained the core of the concept throughout,” added Mr Ó Machail.

“Eventually a site was identified that was deemed perfect for the new centre. The derelict fire station building had long been an eyesore and a blight on the landscape of the west of the city. The site was located within Armagh Neighbourhood Renewal Area and at the gateway to the historic conservation area of the city.

“It was also strategically located directly on the tourist trail between the two cathedrals, next to the North South Ministerial Council and close to schools, shops and other services.”

Help came initially from Newry and Mourne Enterprise and Cooperative Agency through their Social Entrepreneurship Programme. Backing quickly followed from the then Department for Culture Arts and Leisure and Ciste Infheistíochta Gaeilge, and a strong business case for the proposed cultural centre was developed with assistance from senior economists in the Department of Finance.

Said Mr Ó Machail: “The arduous process of obtaining the site, planning permission and relevant statutory approvals was set in train. The catalyst eventually came in 2015 with the decision of the Department for Communities to act as project sponsor and the agreement of the funders to increase their contributions in order to get the project across the line

“And, finally, here we are. The contractors will be on site in December and the duration of the construction phase is anticipated to be approximately 12 months.

“When completed, the new Aonach Mhacha Cultúrlann will be a major addition to the local community, creating dedicated social space for Irish speakers, generating new jobs and enterprises and contributing to the evening and night time economy with a full programme of events throughout the year.”

There has been a great deal of interest in the project and those involved have been buoyed by the level of support which has been shown, evident at the launch on Friday.

Mr Ó Machail added: “We welcome the strong community support on show here today from all sides of the community for this ground-breaking project, which is vindication of the voluntary efforts and sacrifices made by my colleagues and I in bringing the project to fruition.

“Aonach Mhacha will be a beacon for cross-community and cross-cultural understanding in our unique and historic city for many years to come.”