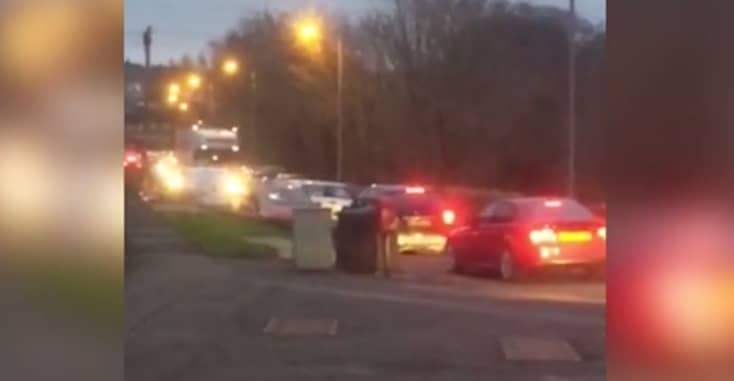 The video above shows what happened when a number of residents heeded the advice of a traffic warden and parked on the opposite side of Drumadd Terrace in Armagh.

Last night, Armagh I published the story about Stephen Blayney, the resident who was slapped with a £90 penalty notice for parking in the same spot he has done so every day for the last 25 years.

Drumadd Terrace is a narrow slip road off Victoria Street, which leads out onto the Hamiltonsbawn Road, or the Portadown Road from the opposite direction.

At the best of times, it’s a narrow passageway, but as we can see from the video above, chaos ensues when traffic builds up.

The video shows traffic at 5pm. It took just 10 minutes until gridlock.

Resident Wayne Baird, speaking to Armagh I, said: “As instructed by the traffic warden, a few neighbours got together and we parked our cars where she told us we could.

“We were careful to leave enough space for emergency services, if they needed through and also, while parked there a lady driving a 40ft truck was able to pass but when traffic built up around 5pm the whole street became gridlocked.

“Traffic was queued as far as Lindsay Heights on the Portadown Road and as far as the DOE yard at Orangefiel. These queues took approximately 10 minutes to form.”

We are currently awaiting a response from the Department of Infrastructure.