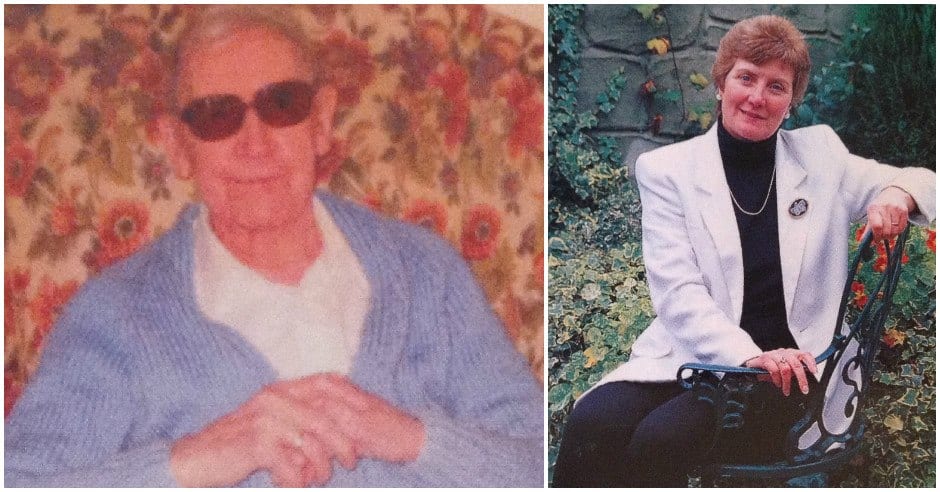 A funeral service will take place on Monday for one of Armagh’s best-known and highly-respected residents, Mr William Albert Mackrel.

Known to all as Bert, he founded the Lena Mackrel Poetry Competition for local schools.

Competition patron Sylvia McRoberts – a former Armagh mayor – became involved during her time on the old Armagh City and District Council and was “so impressed” by the event she returned every year.

She told Armagh I that Bert – who was blind – had established the event to bring school children together.

And he did so in memory of his dear wife, Lena – whom she said had acted as “Bert’s eyes” – and with the organisational enthusiasm, flair and panache of the late and dearly-missed Pamela Rea.

Bert was unable to attend the 2016 competition due to ill health, which was held in memory of the competition’s honorary secretary, Pamela, who also sadly passed away in April this year after a battle with cancer.

The former councillor hopes the competition will continue as a tribute to both Bert and Pamela following the death this week of the much-loved nonogenarian.

Since it began back in 1999, hundreds of pupils from schools every school across Armagh city have written poems on a selection of themes in what is a highlight in the local schools calendar.

The children eagerly look forward to taking part and the competition has had much acclaim, with some of the winning entries picked up and used in various publications.

One Christian Brothers’ School pupil, Ryan McParland, even had his poem – ‘Christmas in Donegal’ – turned into a Christmas single!

Bert founded the competition with the express aim of strengthening and building on community relations through creative writing.

And it has done just that. All schools across the city enter the competition with their works assessed by a hand-picked judging panel, before a prize-giving ceremony is held each year at which the awards are traditionally presented by the Lord Mayor or Deputy.

The winning entries have also been published in a little book which is then sold locally and raises money for charity.

The competition was organised annually by close friend and accomplished writer Pamela Rea, and the event was a source of great pride and joy for Bert himself, who maintained a very close interest in its organisation.

He will always be remembered for that.

Former city councillor Sylvia McRoberts – who was deeply involved in the poetry event and contributed a cup – has been paying tribute to the city man and the competition which he established.

Sylvia – who was also a close friend of Pamela Rea – said the competition was a huge event in Armagh and well supported by the local community.

She spoke to Armagh I and recalled fond memories of the competition, the support which it enjoyed and expressed her hopes it would long continue, a celebration of all that Bert and Pamela had achieved.

“Pamela Rea had invited me to the first ever presentation,” explained Sylvia. “In those days it was back in the Dobbin Street Community Centre.

“I was so impressed with it that day, getting the children involved in poetry, that I continued my involvement year after year. Pamela then asked me to become patron to the competition which I was delighted with.

“I had my own cup which I presented, which was given to an entry from someone who maybe was less able. It was the Endeavour Cup.

“There was always brilliant entries but we tried to encourage children of all abilities to enter and I think the Endeavour Cup catered for that.

“Dessie Feeney, of Dessie’s in Armagh, was always a big supporter of the competition and Cathy Rafferty, when she was Lord Mayor, had a special Commendation Award – she too loved the competition.

“Emersons Supermarket and Ulster Bank contributed massively over the years.

“I can remember when only a small amount of schools entered. I think that’s its biggest success, having every school in Armagh enter.

“Pam and I were immensely proud of that achievement. The schools were so enthusiastic, it was such a cross-community thing too that got everyone involved, including the Lisanally Special School; it was an extremely prestigious event.

“I loved seeing the young primary school children go home with the cups in their hands.

“I just really hope the event can continue, but it will never be done to the level Pamela achieved.”

Bert Mackrel was born into an old military family, the only son of Albert and Kathleen Mackrel, and the family was to travel to far-flung destinations due to his father’s role.

Married twice, first to Herta and later Lena, Bert had lived in earlier times at Lonsdale Street in the city and his latter years, before moving to Greenpark, were spent at Victoria Park.

His only sister, Nancy, passed away in July of this year, in her adopted home of Toronto. She had lived in different parts of Ontario, as well as in the United States, for over 60 years, before she died at the age of 85.

Her ashes will be returned to Northern Ireland and her native Armagh in July of next year when a celebration of her life will be held.

A funeral service for Bert, meanwhile, will take place at Roselawn Crematorium tomorrow (Monday), at 11.30am, while a special Service of Remembrance – a celebration of his life – will also take place at a later date in Armagh.

The funeral arrangements are entrusted to Jackson Stoops and Sons, 44 Moy Road, Armagh, who will be accepting donations, in lieu of flowers, for the Guide Dogs for the Blind Association.

Bert Mackrel is survived by two nieces, Kym and Lynn, and our deepest sympathy goes out to them at this time.