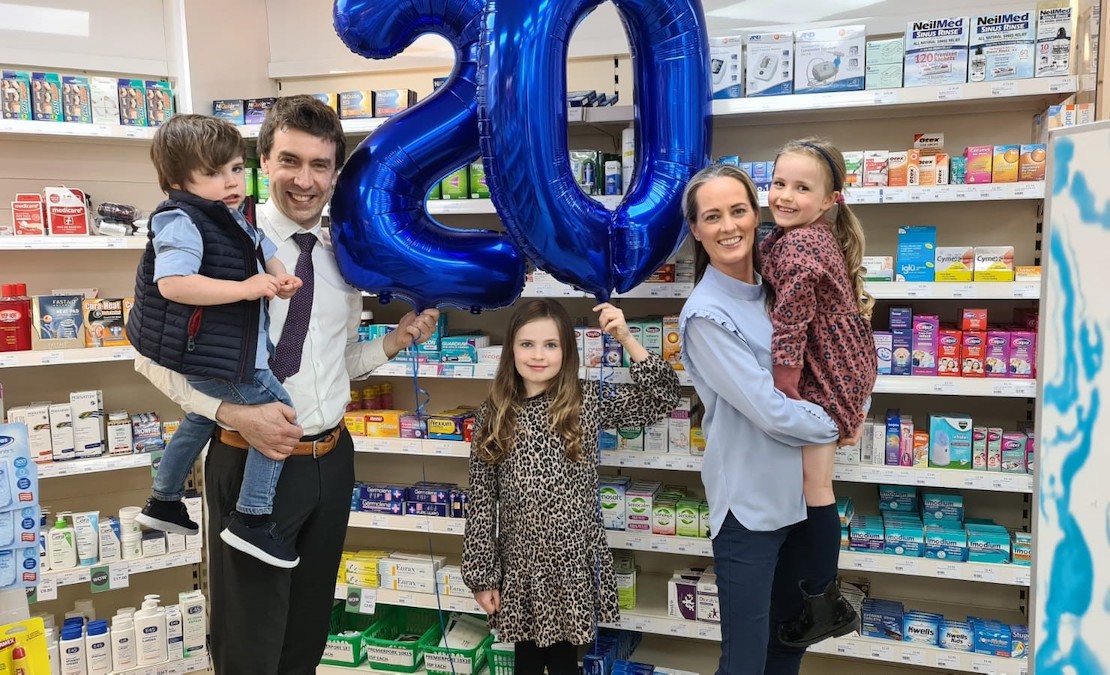 Paul McKeever, Managing Director, with his wife Helen and their three children James, Lucy and Alice

Twenty years ago – May 1st, 2001 to be exact – a young County Armagh pharmacist opened his first store at the tender age of 23.

Paul McKeever, never had any predetermined goal in mind but the intervening two decades has witnessed the St Patrick’s Grammar School alumni open up a further 25 stores across Northern Ireland, Republic of Ireland and England, going on to employ in the region of 340 staff.

And there’s another three stores in the pipeline!

A portfolio as extensive as that may be considered a small empire to many, but McKeevers Chemists have an altogether different ethos. Paul has created a blueprint for success, honed with the purchase of each store, a plan that has stood to him over the years.

Each and every one of the McKeevers shops have felt like the very first one, which opened its doors in Marcus Square in Newry back in 2001.

The 43-year-old puts his success down to the staff – to each and every one – his first ever employees as important as his most recent. From the pharmacists to warehouse distribution staff, sales assistants to the delivery drivers and everyone in between.

“Everyone talks about the five-year plan; I would love to say I had that but it just came from a position of wanting to challenge myself,” Paul told Armagh I.

“I genuinely get a buzz out of growing the business, seeing the people who have been with you from day one, from the early days who are now in senior positions; seeing them grow as the company grows.

“I enjoy the challenge of getting another shop and making it run better; keeping the good things that it did before but adding in the things we do well.”

Keeping great staff is what McKeevers Chemists is all about – a testament to the solid foundations of a company in safe hands. A closer look at stores in Keady and Armagh alone is a reflection of a strong company culture, centred around its staff and customers.

“In a lot of the shops, staff have been there for years,” Paul enthused. “They’re embedded in the community, know the people who come in, how to help them. In Armagh for example, there are pharmacists who are treating the children and grandchildren of those who came into them originally – that’s fantastic.”

For Paul it’s not just about growing a business, and he speaks for many of his pharmacists when he says, it’s the fulfilment that comes with being able to help. He adds: “Helping people out – and unfortunately, that can be in real sickness, sometimes terminal illness – if you’re there, sometimes out of hours, or someone comes to your door – even a nurse at night – that’s the sort of thing that goes on, but I think that’s why we do the pharmacy bit for, you enjoy that job satisfaction.”

Along with being able to help out directly in the local community, McKeevers Chemists are active in promoting and helping charities, none more so than the Southern Area Hospice – with an ongoing partnership in place.

There are always ongoing fundraising and community events which place the stores right at the heart of the community – they are the hubs within the areas they serve..

Last year the company won Community Pharmacy of the Year for the exemplary service to each and every one of the areas they serve. That extra mile comes from sales assistants, delivery drivers, warehouse operatives and pharmacists to the firm’s office staff and cleaners.

It’s a laser-focussed approach from each and every store – that blueprint Paul has created – and while it has remained constant, some things naturally change over time.

“When we started out in 2001, in our first shop in Newry, the town centre was a completely different place,” Paul added.

“Going back to those days in Newry, everything was on the high street, there was no internet essentially; even the big department stores were coming in, it was really early days for them, it was a very different place”.

“From my point of view, I was a pharmacist running my own shop at 23, with 2-3 staff. Starting off in those days, it was a genuine honour that people would come into your shop, you really felt that, I was so grateful. And to this day, I feel that sense of gratitude.

“As time goes on, we bought more shops. 2004-05 was a big year because we went from one shop at the beginning of ’04 to five shops at the end of 2005. In that time, we very much became a small group and we had to change how we did things.”

In 2013, they opened their first shop in Liverpool.

While operating in three different jurisdictions – Castleblayney, Co. Monaghan was acquired in 2015 – and all the challenges that comes with that Paul admits it was “just as challenging as a sole pharmacist in one store; you’re sorting very different problems”.

Now settled in Newcastle, Co. Down with his wife and three young children, Paul is still as driven as ever to serve the community.

And with a number of stores in the pipeline, Paul believes there is room for continued growth, and firmly believes online and home deliveries will become much more commonplace, accelerated because of the current pandemic.

Less face-to-face interaction has been one of the toughest hurdles for the community-focused pharmacy – and its customers – but a robust online store and delivery service has allowed for a seamless transition to a new way of offering their services.

It’s a challenge McKeevers Chemists has risen to admirably; the company has focussed on being there for their customers, especially their most vulnerable, no matter what.

And Paul hopes it’ll be another 20 years or more of continued support in all the communities the company now serve – and the many more still to come.

Check out the McKeevers website here for more details on services, including prescriptions; treatments; vaccinations; deliveries and much more.