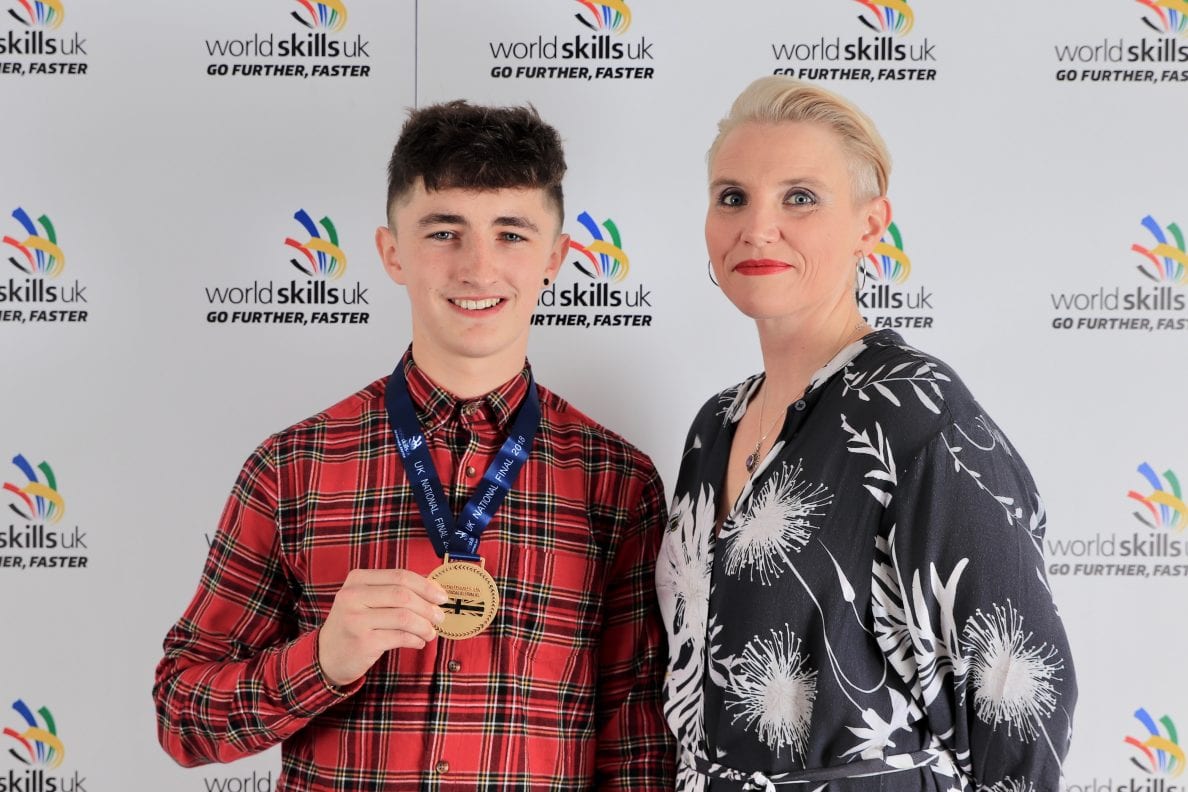 Pictured receiving his gold medal from Gina Webster, product manager at the Construction Industry Training Board, is Odhran Connolly from Gilford.

Two students of the Southern Regional College are celebrating after scooping gold in the industry-leading WorldSkills UK Live.

And pair helped Southern Regional College retained its top three leader board ranking at this year’s event in Birmingham.

Honouring the achievements of more than 200 of the UK’s most highly skilled apprentices and tradespeople, SRC’s six-medal haul from the event also saw it retain its number one place in Northern Ireland on the strength of its stellar performance.

Facing tough competition, SRC’s team of students from across the Newry & Mourne, Down, Armagh, Banbridge and Craigavon areas secured two gold medals, one silver and three bronze medals across a wide variety of disciplines, including butchery, tiling, plumbing and beauty – in addition to two commendations.

More than 85,000 people visited the show at Birmingham’s NEC over the three full days of competition.

Brian Doran, Chief Executive at SRC, attended the competition and said: “This is a fantastic achievement by our students and places Southern Regional College once again in the top three colleges in the UK and the leading college in NI for the strength of our skills development programmes.

“Attending the event alongside officials from the Department for the Economy, it was very inspiring to observe our hardworking students both competing and excelling in what was an extremely high-pressure environment.”

SRC’s outstanding medal performance put the college firmly inside the UK’s best-performing colleges and organisations – including Toyota, BAE Systems and QinetiQ – with only the City of Glasgow College and New College Lanarkshire scoring higher.

Putting SRC out in front was Armagh’s Salius Repecka and Odhran Connolly, from Gilford, who faced down the competition in butchery and tiling respectively to take home gold medals.

This came after Elizabeth McAleavey from Laurencetown demonstrated her winning forensic science skills to claim silver.

Kirsty Frazer from Newtownhamilton was commended in beauty, while Keady’s Shane Murray won his commendation in plumbing.

Additional medals were also secured in the ‘inclusive skills’ competitions where Thomas Neagle, Bronagh Boothman and Dalton McCoy picked up a respective gold, silver and bronze recognition for their winning achievements in catering and restaurant service.

“I want to thank most sincerely the staff members who gave of their time to support the students and without whom this success would not have been possible. I am sure everyone across the College would wish to join me in congratulating Team SRC,” added Mr Doran.

Following their success, some of the winning students are already vying to be chosen by WorldSkills UK to join the training programme for WorldSkills Shanghai 2021, where they could be selected to represent the UK in their chosen skills area on a global stage.

SRC has seen significant success in previous years, including at WorldSkills Sau Paulo, where local student Gary Doyle was crowned Best Plumber in 2015. Armondus Tamulis also reached the WorldSkills Abu Dhabi final earlier this year, delivering a sterling performance representing both SRC and the UK in wall and floor tiling.

WorldSkills UK Competitions are run in over 60 skill areas and are proven to help young people go further, faster, in their training and chosen career.

Dr Neil Bentley, CEO of WorldSkills UK said: “This has been the biggest and best skills event that the UK has ever seen.”