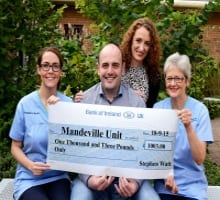 An Armagh man has undertaken a charity shave to give something back to cancer care teams who cared for him during his treatment for bowel cancer.

Stephen Watt recently visited the Mandeville Unit, the Southern Trust’s specialist cancer unit, along with his wife, Denise, to donate £1003 to the staff there. Stephen, originally from Newtownabbey but now living in Armagh, raised £2004 overall by taking part in ‘Brave the Shave’, a campaign that was set up by Macmillan Cancer Support to give people the opportunity to support cancer care teams.

The kind contributor donated the remaining £1001 of his funds directly to Macmillan Cancer Care Support.

Stephen spoke about what motivated him into raising funds for the Trust and Macmillan Cancer Care Support.

“It was such an easy thing to do, I wanted to give to others what I had received myself,” he said.

“I was once diagnosed with bowel cancer, but the treatment, care and support I received from the staff at Craigavon Hospital, the Mandeville unit and Macmillan has been first rate.

“On completion of my treatment, I wanted to give something back to ensure the people that follow me are able to receive the same care and support. Also after a year of a hairy top lip it was able to feel the fresh air for a good cause.”

Stephen gave a special mention his wife Denise and daughter Laura and also sent a huge thank you to all those whom supported him and donated to these worthy causes, particularly the staff at Stena Line and Belfast City Hospital.