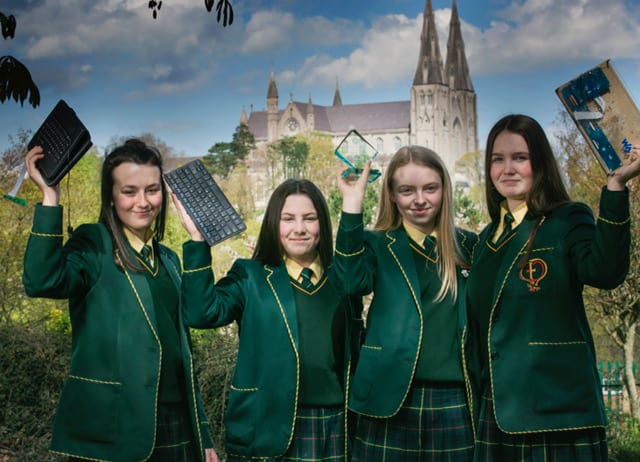 St Catherine’s College “Furious Four” were the Top Team in N.I. and 2nd in the U.K. in the 2018 CyberFirst Girls’ Competition. The year 9 students, Susannah Conway, Annarose Tennyson, Aoife Tiffney and Molly McNally enjoyed a trip to Buckingham Palace and met HRH the Duke of York on Wednesday.

Four students from St Catherine’s College, Armagh are celebrating after being named second in the UK in a nationwide codebreaking challenge.

Confirmation of this staggering achievement came through on Thursday and all at the city-based school are thrilled.

Coming first in Northern Ireland and then being named second overall in the UK has ‘crowned’ a remarkable week, which on Wednesday saw the girls enjoy a once-in-a-lifetime trip to Buckingham Palace after reaching the final of the codebreaking challenge.

The 2018 CyberFirst Girls Competition saw girls aged 12-13 test their sleuthing skills and technological mettle against a series of head-scratching challenges set by masterminds from the National Cyber Security Centre (NCSC), a part of GCHQ.

The Armagh team known as ‘The Furious Four’ was made up of Year 9 students, Susannah Conway, Annarose Tennyson, Aoife Tiffney and Molly McNally who met HRH Prince Andrew at Buckingham Palace on Wednesday

They had previously seen off over 1,200 other teams before making it as the only NI team in the grand final of 10 teams held in Manchester.

The surprise invitation from The Duke of York to Buckingham Palace recognised the tremendous efforts of all the finalists.

The challenges at the grand final tested the girls’ problem-solving and technological skills as they tracked down a cybercriminal to help decrypt the files of a vlogging ransomware victim, and find hidden clues in the room for points.

Speaking about getting involved in the competition, Head Teacher of Digi Skills at St Catherine’s College, Armagh, Dr. Caroline Pereira-Lynch, said: “Our school ethos is about opening up all opportunities for girls and this competition gave us a unique and practical insight into the cyber security industry and helped us learn more about it.

“We were delighted to make it to the finals as the girls were so eager and worked incredibly hard.

“To be the top NI school and get a special invitation to Buckingham Palace gives the girls a great sense of achievement.”

Now in its second year, 4,500 girls entered this year’s CyberFirst Girls competition, which aims to knock down some of the barriers that have resulted in women being so worryingly under-represented in cyber security, where only one in ten of the workforce is female.

Local cyber security company, Cyphra has been working closely with NCSC to get more schools and young people from NI involved in the CyberFirst competitions.

Speaking about this year’s participation, Director Conrad Simpson said: “The CyberFirst competitions are an important step in giving students an insight into this exciting dynamic industry sector which currently has a skills shortage and can offer a very interesting career pathway.

“Cyphra are committed to identifying, nurturing and helping start careers in cybersecurity.

“The girls from St Catherine’s College, Armagh along with all the other schools who entered the competition are trailblazers and I’ve no doubt we will see some of them lead the way as future cyberists.

The competition has seen a highly positive take up on its return, with a 52% rise in the number of schools who registered teams to compete this year..

She told them: “What you achieved has helped put the next generation of NI cyber and computing talent on the map.

“You are great ambassadors not only for your school and other girls but for raising the importance of computing and STEM led subjects for everyone.”

The girls also received individual sponsored prizes from Cyphra at the assembly. The overall UK winners of CyberFirst 2018 were the Church of England Piggott School in Berkshire who received £1,000 towards their school’s IT equipment.

NCSC have recently published the dates for their CyberFirst free summer courses. Anyone interested in more information on these should contact info@cyberistsni.com or visit the NCSC website.