Shoe buckles fit for a Dean but the Very Revd Shane Forster has no plans to wear them on Georgian Day!

'Georgian Weekend is much more than just a day out, it's the celebration of the city as it is today and our forefathers who shaped it' 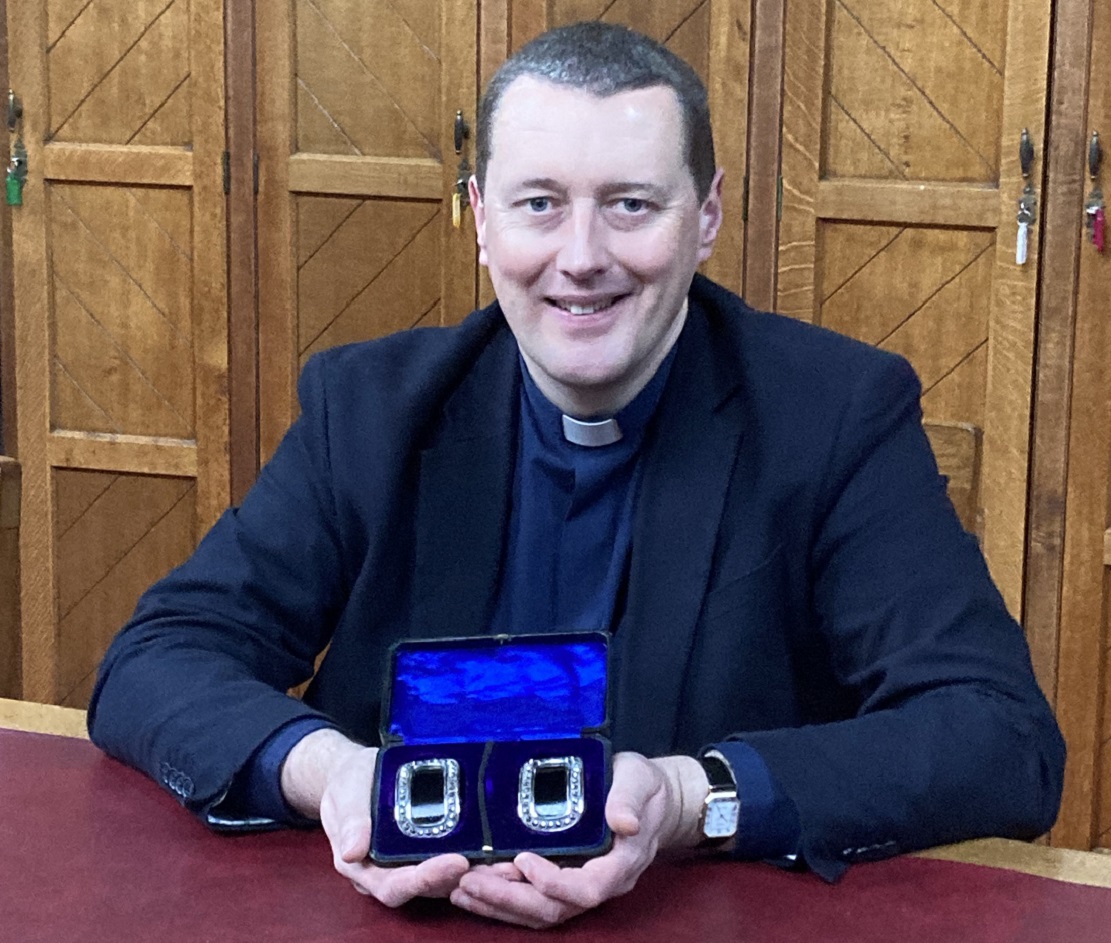 As Georgian Weekend approaches, what better attire for the Dean of Armagh than a pair of silver, jewel-encrusted shoe buckles.

The buckles were discovered by the Dean, the Very Revd Shane Forster, among the collection of silver and other artefacts not on public display at the Armagh Church of Ireland Cathedral.

They are contained in a box, with a handwritten card stating they are for the use of the Dean of Armagh on his dress shoes, and signed by Mrs M Dougan, Portadown.

Dean Forster, who was appointed at the end of February and at 49 is one of the youngest Deans of the Cathedral, was unaware of their existence but “delighted” to find them..

The buckles, like most of the artefacts, date back to the Georgian era and represent an important period in the history of Armagh, as the Dean points out..

“Georgian Weekend is much more than just a day out, it’s the celebration of the city as it is today and our forefathers who shaped it,” he said.

“The Georgian period was when Armagh started to be reshaped in its architecture, in how it looks and in its thinking as well.”

At the forefront of this transformation was Archbishop of Armagh Richard Robinson, an Englishman who came to Armagh, fell in love with it and who was eventually buried in the Cathedral Crypt.

Said the Dean: “He is the person who built the Palace, the Robinson Library, the Gaol and the Observatory.

“Armagh Robinson Library, which is 250 years old this year, has as its motto ‘Healing Place of the Soul’ and the Observatory ‘s motto is ‘The Heavens Declare the Glory of God’ so he was interested in science as much as religion.

“The Library contains books on medicine, botany and architecture because he wanted people to have a better understanding of the world in which they lived. It was a public library and his gift to the people of Armagh.

“There were also books, maps and pictures of other places in the world at a time when people couldn’t travel easily.”

“He was also responsible for the shaping of the mall because he wanted a green space where people could walk and enjoy the fresh air. He was very much ahead of his time.”

“The Archbishop also put clergy in roles of responsibility, so safeguarding what he had helped create. So I am the Dean of Armagh but I am also keeper of the library and governor of the observatory.”

To celebrate the event, both the Cathedral and the Robinson Library will be open to the public and no booking is required.

The Cathedral is open Wednesday-Saturday from 9-4, with services on Sunday at 10am, 11am and 3.15pm.

Armagh Robinson Library and its museum at No 5 Vicars’ Hill will open from 11am-5pm on Georgian Day.