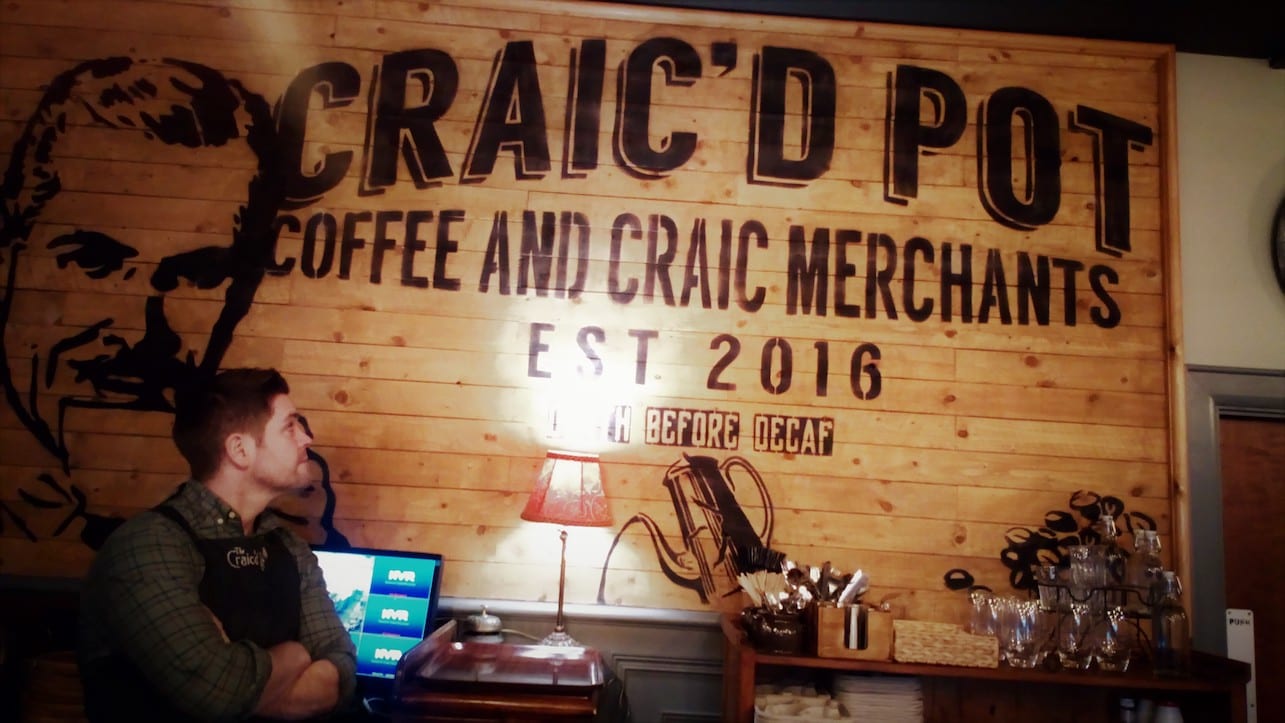 One of the most iconic sitcoms in TV history, a series of failed jobs and a random espresso in a Barcelona café were all key ingredients for one of Armagh’s best-loved and eclectic coffee houses.

For Scott King, his much-loved Craic’d Pot on Upper English Street, in the heart of Armagh city centre, is the perfect blend of 38 years of experience – some of which he said were in failed, or unfulfilling, jobs.

The Richhill man has experienced as much as many people would be familiar with in a life-time.

Although born in Northern Ireland, Scott would spend much of his formative years outside the island.

His father, who worked for Goodyear Tyres, took up a post in Saudi Arabia during the 1970s and this is where the young Scott would spend his early childhood.

“My dad worked for Goodyear Tyres in Craigavon before an opportunity came to move abroad to a post in Saudi Arabia,” Scott recalled, while sitting down with me in his Upper English Street coffee joint.

“He hadn’t even heard of the place before, never mind knowing where it was,” Scott spoke fondly of his dad.

Scott’s mother would come back to Northern Ireland to give birth, but the first year of his life would be spent in the searing heat of Dubai.

Scott remembers: “I have seen photographs of me looking out from a penthouse apartment into miles and miles of desert.”

Come on down folks we are open to 10pm! #craicdpot

What followed would be years of moving about posts in Saudi Arabia and attending International Schools before eventually returning to Co. Armagh.

“I must have been eight or nine when we moved back; we moved back to live in Richhill and I attended Hardy Memorial School.”

That would only be the case for a short number of years as Scott was only halfway through his first year at the Royal School in Armagh when he was once again uprooted.

The family would jet off to Vienna for just over a year before heading to the historical Turkish city of Istanbul.

But Scott would return to attend the Royal School to complete his GCSEs, before his A-levels at the Southern Regional College.

After that it was off again; this time Herriot Watt University lay in wait in Edinburgh.

“I knew loads of people wanted to stay home for university, but I really wanted that freedom and to get away from my mother’s cooking,” he jokes.

Although, when he arrived at Herriot Watt University to study Management and Business Law, Scott was surprised to find many had travelled from Northern Ireland with him.

“I mean, I thought this would be an escape from Northern Ireland, instead I was in a flat with boys from the Royal School and Methody college.

“However, it was the best decision I made, I was able to go away and gain my independence.”

But then he returned home, Scott found it difficult to find work like many graduates, but thought he had struck it big time with a deal “too good to be true”.

“I ended up getting onto a fast track management scheme for Lidl,” he said. “The job came with some great perks; company car, private medical – the works.

“But it was one of those jobs they really take your pound of flesh from you,” he added.

What the job entailed was long hours, with the Richhill man conceding that at points he was working 80 to 90 hours a week on average.

“I had no work-life balance. My life was living, working, breathing Lidl and in the end, I just thought to myself ‘you need to catch yourself on’”.

What followed next was a mix of jobs from private health clubs to writing funding papers as a project manager for PEACE two and three programmes.

Following this he would take up a job as a business development manager for a window and conservatory company.

This would be a short-lived enterprise which would close not long after Scott got on board due to the economic downturn.

“At that point, I was really worried; me and my wife Suzy had just got married. I was looking for something to do while I was working freelance at LA Fitness in the City Hotel,” Scott recalled.

Like his life up until that point, it was once again time for change. Next stop – teaching.

“Suzy is a teacher and her sister works in admin at a school; her mother worked in admin, her brother is a teacher, his wife’s a teacher,” he reeled out one after the other. “I was sitting around the dinner table one day and I thought to myself ‘there must be something in this'”.

Scott would complete a PGCE and begin substitute teaching in the Armagh area, all the while still taking classes at LA Fitness.

He would eventually take an offer from the gym to become the general manager.

Scott really enjoyed the role but unfortunately for him, this would once more be short-lived due to circumstances once again beyond his control.

In his thirties and low on ideas, Scott felt something needed to change, but the inspiration for what he now does and loves, came from his wife. Of course it did!

The birth for the idea behind the Craic’d Pot was essentially rooted in two experiences; one a trip to Barcelona, the other – wise words from his wife.

“I was cycling with friends in Barcelona sitting in a coffee shop,” he explained. “The place was very eclectic, very hodgepodge in design. Sitting having an espresso and I thought to myself I would love to do this.”

However, upon his return home, he would once again put the thought to the back of his mind and began looking at various teaching jobs.

But while watching an exasperated Scott engage in what was becoming a daily and habitual task, his wife one day intervened and told him words he says were the seeds, soil and water he needed: “You’ll never be happy unless you do something for you.”

And with that Scott decided to open the coffee shop – and the Craic’d Pot was born.

“I suppose it was always at the back of my mind, but I never went for it,” he said. “I wanted it to be a place that appeals to young people, an alternative to going to the pubs in the evening.

“A spot to catch up in the evening time as opposed to going to a restaurant.” Put in simple terms, Scott quipped: “I wanted it to have that Central Perk kind of feel.”

Hence the ‘Friends‘ feel to the place.

The business has gone from strength to strength since it opened and continues to attract coffee lovers of all ages, and at all times of day.

“I feel that the reason this succeeded was partly due to hard graft but also how I learned from my experiences of businesses going under in the past; I know the importance of the customer and their power.”

He also stated: “The other important thing is having the right people on your side, the work we do here would not be possible without the great team I have behind me”.

Scott hinted that a second shop is not out of the question, but says that at the same time he would not like to be stepping away from the original.