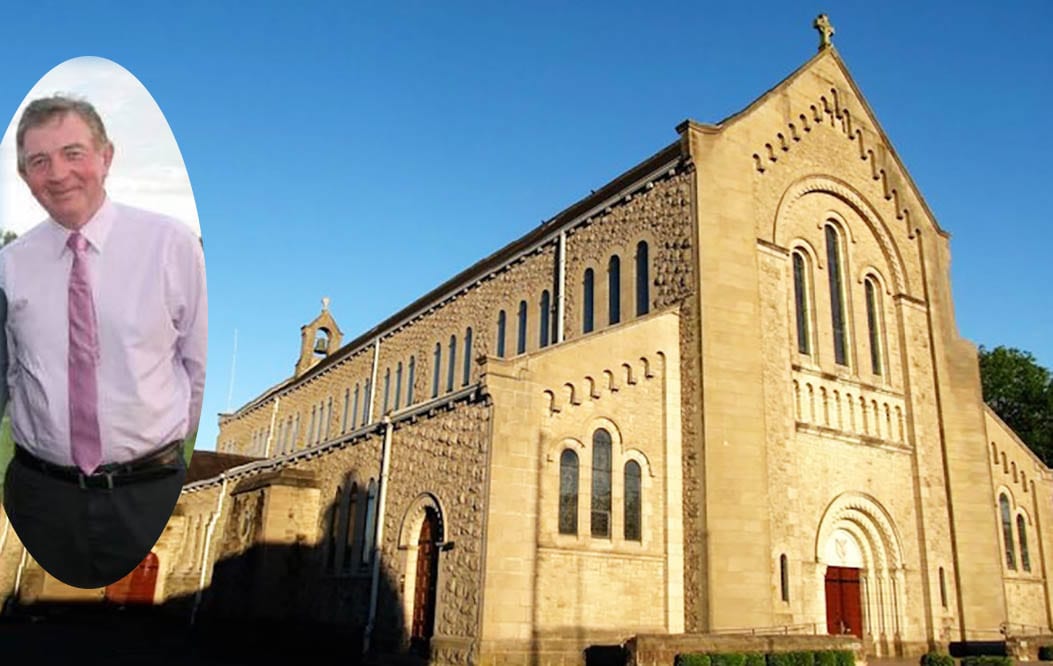 An Armagh man who passed away in hospital on Friday from Covid-19 has been described as someone who was “always kind, always helpful, always understanding”.

Father-of-four Kevin Toal – who lived with his wife Ronnie in the Newry Road area of the city – was laid to rest earlier.

And at his Requiem Mass in St Malachy’s Church in Armagh on Monday evening, Pastor Emeritus, Very Rev Fr Peter Kerr offered his sympathies to the family of a man whom he said had been a “great friend” to himself.

Fr Kerr prayed “for strength to our health care workers and wisdom to our leaders” at these difficult times.

Fr Kerr said the death of a loved one at any time always brings sadness and sorrow and grief, but the circumstances of Mr Toal’s death was “particularly traumatic” for the family.

He told them: “You have been denied the normal customs associated with death or dying.

“You’ve been denied the opportunity of being there at his death bed, to hold his hand and speak words of consolation and hope and love.

“You’ve been denied also holding a wake, where people will come, the extended family and friends to sympathise with you and support you and to pray for his eternal rest.

“And you’ve been denied the opportunity of coming to the church with your family and with the community gathered around you to join in the prayers of his Requiem Mass.

“In fact for you, the only tangible sign of his death was when his coffin was placed on the green sward before being lowered into the grave.

“And May God console you at this time in your sorrow and your loss.

“You will also be consoled that he got through death without any physical or mental distress.

“And I know that you, in your generosity of spirit, that your hearts and prayers are with other families who have had the same experience or are experiencing what you are going through at this time.”

Fr Kerr said, looking back on Mr Toal’s life, he had been “blessed in so many ways”.

He said he had been blessed by his late parents, Sarah and Barney, and his siblings.

He had been blessed by Veronica, his wife of over 50 years.

“She was the rock on which his life was built,” said Fr Kerr.

He had been blessed by his children, Sharon and Fiona, Orlagh and Gary.

And he spoke of his grandchildren, to whom he had been “generous with his time and talents, giving all he could to them”.

Fr Kerr said Mr Toal had started out on his working life as a psychiatric nurse at St Luke’s Hospital in Armagh.

He added: “Through his dedication and competence he climbed the promotional ladder to become Director of Mental Health Services in Armagh and Dungannon.”

In his role, he said, “countless people came to him with their worries and their troubles and he brought much consolation to them”.

Fr Kerr also spoke of his “great love of sport, particularly of Armagh”, and said he had joined with so many others to celebrate in 2002 their All-Ireland winning triumph.

On a personal level, he said of Mr Toal that he would “always be grateful for his friendship”.

He said: “Since I first set foot in Armagh he was a great friend of mine – always kind, always helpful, always understanding.”

At the conclusion of the Requiem Mass – which was streamed via webcam given the current Government guidelines – he said the family wished to express their gratitude to all the health care staff and the ambulance service. They thanked them for the “excellent care” which their husband and father had received and praised them too or their bravery.

Fr Kerr, reading a message from the family, thanked everyone who had reached out and supported them in any way.

“We have been overwhelmed by all the kind messages and tributes we have received which have helped us immensely at this time,” he added.

To Mr Toal’s wife Ronnie, daughters Sharon, Fiona and Orlagh, son Gary, brother John and sister Bridie, sister-in-law Genevieve, grandchildren and a wider family circle, we would like to offer heartfelt sympathy and prayers at this very sad time. May he Rest in Peace.