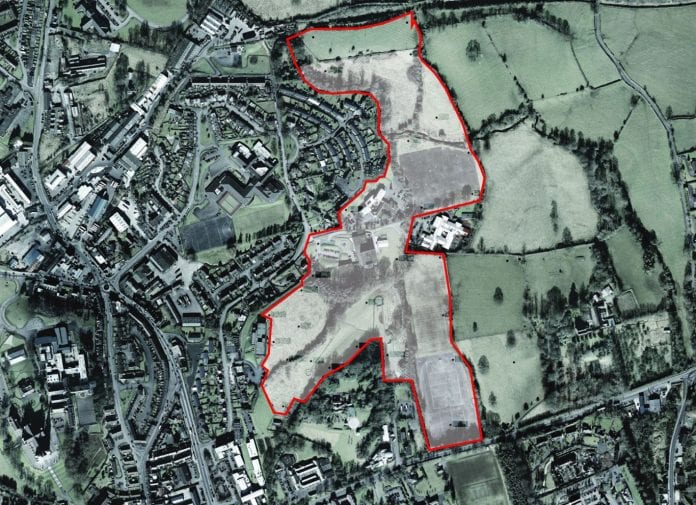 The Royal School could shortly benefit from the provision of a new 2G hockey pitch and spectator stand under the long-awaited plan to construct a £30 million Armagh Leisure Village, Armagh I can reveal.

The development will see the replacement of the existing cinder hockey pitch and a slight relocation of the playing facility – two metres along the existing goal line.

The proposal – submitted by Armagh City, Banbridge and Craigavon Borough Council – is described at this stage as being for the “sole use” of the Royal School.

But several sketches of the proposals, compiled for ABC Council by Belfast-based Doran Consulting, indicate that they are the first part of a sporting and recreational mecca for that wider area.

It was in February 2018, that ABC Council earmarked £30 million for the five-year Armagh Leisure Village to be included in its capital programme.

The site chosen was in the Lisanally area and stretching to College Hill.

The overall plans, as reported at the time, would accommodate an enhanced range of shared indoor and outdoor facilities, including a 10-lane, 25-metre swimming pool, sports halls, studio, fitness suite and thermal spa. It would also incorporate an ultra-modern multi-sports indoor arena and new specialist strength and conditioning facility.

The council confirmed at the time that a hockey pitch and athletics track will also form part of the development, with all facilities “expected to be open in 2023”.

According to an agent’s submission to planners in relation to the hockey pitch, the development is necessary now due to ongoing problems with the current pitch being unplayable.

The spectators stand is also to protect against the elements and as such has been positioned southward away from the “prevailing wind”.

It will accommodate up to 150 spectators at a time.

The agent’s letter to planners reveals: “The purpose of the application is to meet the immediate needs of the Royal School Armagh, whose hockey pitches are currently unusable due to persistent waterlogging and the constant presence of moss on a significant portion of its surface.

“The school is currently forced to train for and play matches off site.

“This proposal relates to one of two hockey pitches used by the school. The only access to the pitch is by foot via the underpass beneath College Hill from either the changing facilities or the main car park at the main school building.

“There is vehicular access directly off College Hill but this is gated, permanently locked and is used solely by emergency vehicles should they require access to the sports grounds.

“These access arrangements will remain if this proposed replacement is approved and constructed.”

There is also a five metre high perimeter fencing included in the plans to act as a ball stop and “secure the new pitch when it is not in use”.

The Armagh Leisure Village is to be a shared facility for use by schools, clubs and the public.

It came after a public consultation and the idea is to replace the outdated Orchard Leisure Centre which would require much work to modernise and for which there is no room for expansion on the existing site.

The Lisanally site plans also came after a £30 million investment to build the South Lake Leisure Centre in Craigavon to aimed at meeting the needs of people in the north Armagh area.

Meanwhile, there are also plans for floodlighting at two other sporting facilities in Co Armagh.

One would see six 15-metre high columns erected at the synthetic hockey pitch at Lurgan College.

St Michael’s GAC in Magheralin is also planning to put floodlighting in place at its pitch on the Ballymacbrendan Road.

All three of the application are now with Armagh City, Banbridge and Craigavon Borough Council and will be publicly advertised this week.