Mall commemoration service as part of special series of events 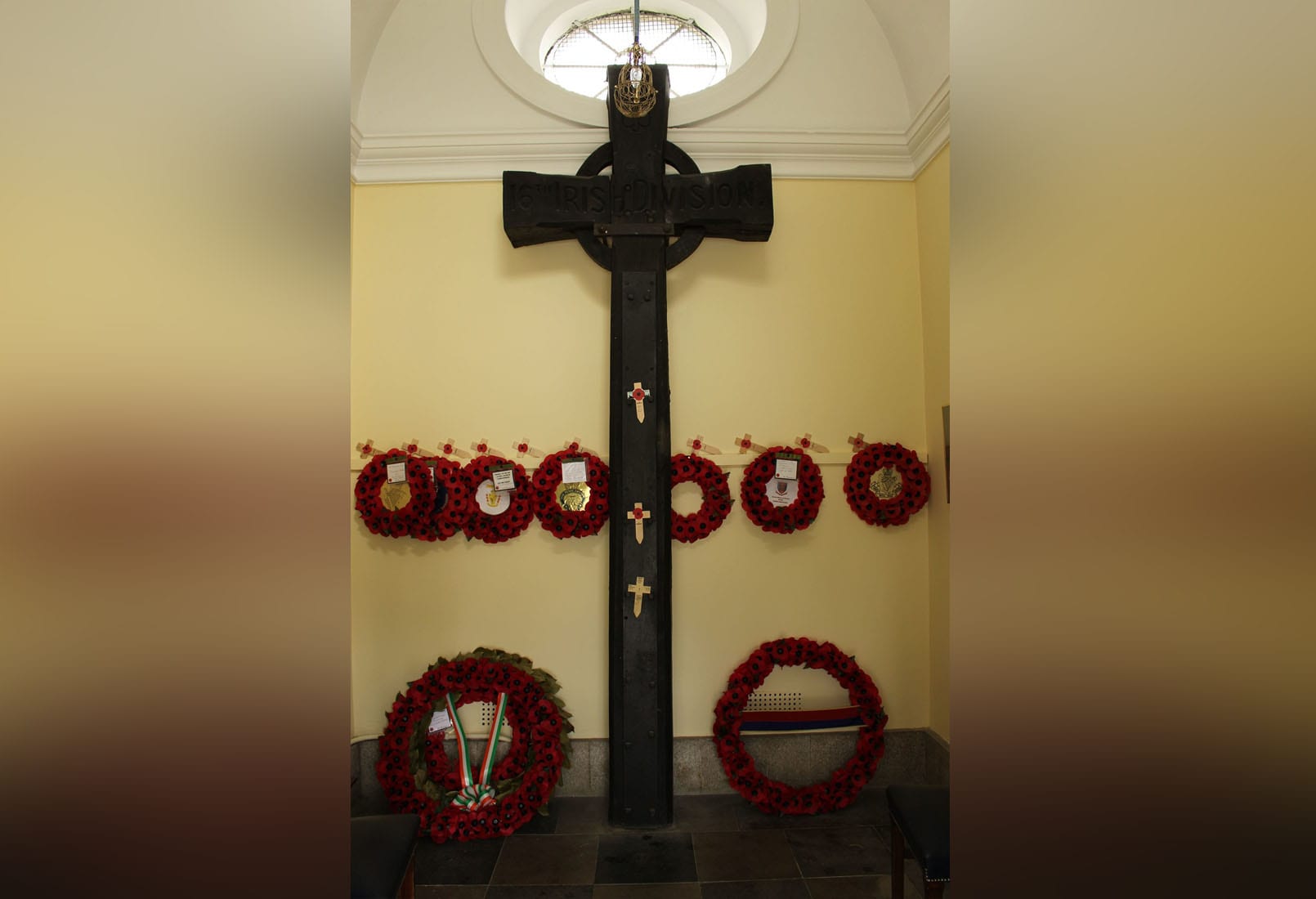 The original Ginchy Cross is coming to Armagh.

The historic relic is a memorial to men who died at Guillemont and Ginchy during the Somme Offensive in 1916 and a copy of which was erected at Wytschaete following further losses during the Battle of the Messine Ridge.

As part of the Decade of Centenaries, Armagh City, Banbridge and Craigavon Borough Council and the Royal British Legion have worked successfully together to bring this historical relic to the area.

The ‘Ginchy Cross’ is a wooden cross fashioned on the style of a Celtic cross, designed by Major General W.B. Hickie, the commander of the 16th (Irish) Division.

Made from old oak beams by the divisional pioneer troops, it was originally erected during the war on the Somme in a field between the villages of Guillemont and Ginchy.  Both villages were liberated by the Allies, particularly the 16th (Irish) Division.

In 1917, this wooden cross was made as a memorial to these events, it stood in Ginchy until 1926 when granite replicas of the original cross were erected in Guillemont (France) Wytscheate (Belgium) and Thessaloniki (Greece), to commemorate the loss of Irish soldiers in those places.The original cross was then relocated the Irish National War Memorial Gardens in Dublin.

The Ginchy Cross is loaned by kind permission of the Trustees of the Irish National War Memorial and the Commissioners of the Office of Public Works (OPW) Ireland.

“This is a great honour for the Borough,” said Lord Mayor Councillor Garath Keating. “We know that Belgium requested the loan of the Ginchy Cross for their Messine Commemoration. It’s a reflection of just how important Armagh City as the ecclesiastical capital of Ireland really is. Now people from far and wide can come and see this Cross of great historical significance.”

A series of events reflecting the cross border co-operation and cross community relations have been organised to celebrate and mark the importance of this fantastic historical relic coming to the area.

The Ginchy Cross will be on display from 6th-11th June at The Cardinal Tomás Ó Fiaich Library, Armagh from 9.30am-5pm and on Saturday, June 10, from 10am until 4pm. The library is taking group bookings while also being open to the general public. This is free of charge but people must book through the library on 02837 522981

To help with further learning there are a number of high profile public lectures. The renowned social and political historian and broadcaster Dr Eamon Phoenix will give a lecture ‘Ireland in Transition’ on Wednesday, June 7, at 7.30pm at The Cardinal Tomás Ó Fiaich Library, followed by Professor Laurence Kirkpatrick recounting the “Battle of the Messine Ridge”.

Then on Saturday, June 10, at 11am Mr Jonathan Maguire will recount “Life in the Trenches”. Again these lecture are free of charge, but prior booking through the library must be made.

If people cannot make any of these lectures or visit the library, they are invited to come and enjoy the special commemoration service along the Mall on Sunday, June 11, between 4pm and 5pm.

Led by the Royal British Legion, Archbishops Eamon Martin and Archbishop Richard Clarke will be the Officiating Clergy at this service of Commemoration. This service is the only RBL Service in Ireland to mark the Centenary of the Battle of Messine Ridge.

Dignitaries have been invited from Belgium, France and Poland, Ministers from the Northern Ireland Assembly and the Government of the Republic of Ireland, as well as representatives from within the local community.

The service will include the dedication of a memorial bench to mark the centenary of the Battle of the Messine Ridge.

“We are delighted to welcome the Ginchy Cross to the area”, concludes the Lord Mayor Councillor Garath Keating, “ the significance of this cannot be underestimated. I hope that as many people as possible will be able to come and see this Cross which is a significant piece of our shared history”.