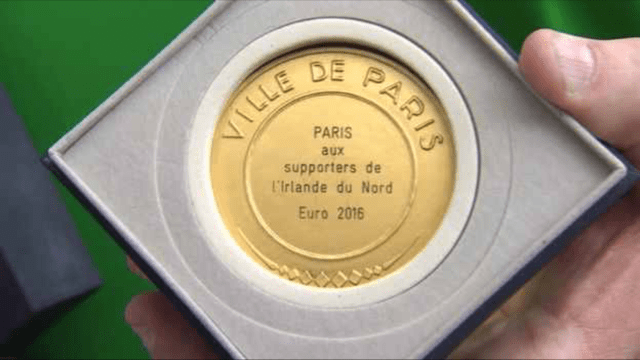 The City of Armagh Northern Ireland Supporters’ Club will welcome a special visitor to their monthly meeting in the Hole in the Wall bar this Thursday evening, December 1.

But it isn’t a former international footballer or a local dignitary, but a famous medal that is set to take its place in the new state-of-the-art Exhibition and Heritage Centre at the home of the Irish Football Association at Windsor Park early in 2017.

The ‘Grand Vermeil’ medal was awarded to the Northern Ireland supporters after the European Championships last summer in France.

More commonly known as the ‘Medal of Paris’, it was presented to the Green and White Army for their ‘exemplary sportsmanship’ during the tournament in June and July.

Since its award it has been looked after by the Amalgamation of Northern Ireland Supporters Clubs and the Armagh club are delighted that their chairman Gary McAllister will be in Armagh with the medal.

The medal was awarded to the Northern Ireland fans by the Mayor of Paris, Anne Hidalgo following their heartbreaking exit from the tournament at the hands of Wales in Paris’ famous Parc des Princes.

She said that the Northern Irish supporters contributed to the “festive atmosphere” that took over Paris during the tournament and hailed them as a “model for all supporters of the world”.

The ‘Grand Vermeil’ is regarded as the most prestigious honour in the city of Paris and in previous years it has been awarded to superstar tennis player Rafael Nadal, Palestinian Authority President Mahmoud Abbas and jazz pianist Herbie Hancock, as well as the supporters of the Republic of Ireland who also left a positive impression on the French capital.

Chairman of the City of Armagh Northern Ireland Supporters’ Club Michael Kerr said it was an honour to welcome the medal to the city.

“This really is a unique event and we look forward to welcoming any local Northern Ireland fans to the Hole in the Wall bar between 7.30pm and 8.15pm on Thursday evening.

“The medal has done a bit of a tour of Northern Ireland and it has generated a lot of interest wherever it has gone.

“There is no charge or entry fee and we just want as many people as possible to come down and see the Grand Vermeil. 2016 has been an amazing year for Northern Ireland supporters and this is a wonderful way to end such a momentous year for the club and country.

“Our club was represented so wonderfully in France by over 60 of our members, but lots of other supporters locally made the trip and this medal can hopefully bring back some of those special memories.”