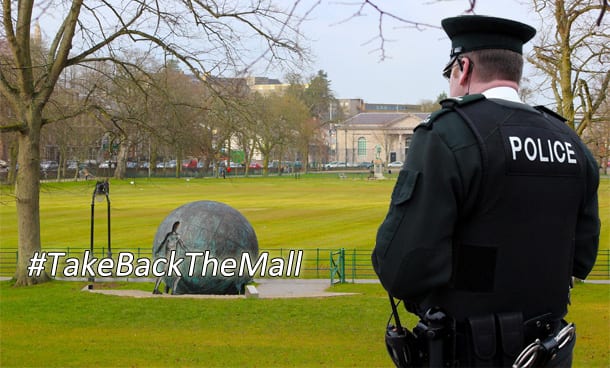 A new park watch scheme is to be established on the Mall in Armagh in response to numerous complaints of public drinking and anti-social behaviour.

And traders and the general public are being encouraged to get involved.

To that end, a public meeting is due to be held next Tuesday night.

The problem behaviour came to a head earlier this year after Armagh I first highlighted the case of a drunken man openly urinating in front of a mum and her three young daughters.

Our report spawned numerous complaints from the public who highlighted other incidents of anti-social behaviour, drinking, verbal abuse and more.

In response, a number of meetings were held and the PSNI presence increased on the Mall.

Now the park watch scheme is to be introduced and the public and traders are being encouraged to take ownership of the Mall and step up and have their say.

Our own #TakeBackTheMall campaign led to an increase of incidents being reported. And it led too to direct action being taken.

On Saturday, the park wath scheme was introduced at the Palace Park in Armagh.

Next Tuesday, a meeting is being organised by the PSNI and Armagh City, Banbridge and Craigavon Borough Council’s Policing and Community Safety Partnership.

And it is being held in an ideal and central venue – Armagh Cricket Club – which has fallen foul of burglars and vandals on several occasions over the past year.

The park watch scheme is very similar to neighbourhood watch, with the PCSP and the PSNI working together with park users and local residents to protect the Mall from vandalism and anti-social behaviour.

Councillor Julie Flaherty, who chairs the Policing and Community Safety Partnership, said: “It is important that everyone looks after the park, not just the PCSP and the PSNI.

“We want to encourage local residents and park users to ‘own’ the park, take pride in it, look after it and protect it from vandalism and anti-social behaviour.

“By doing so they will not only be improving the safety and security of the park but also the surrounding area.

More information on the park watch scheme is available from the Policing and Community Safety Partnership on 028 3831 3607.

Those wishing to go along to next Tuesday’s meeting – which gets underway at 7pm – should made contact and confirm their attendance.