Eileen spent her working life in Thomas Street, initially in Jack McKenna’s chemist and then, for the past 30 years, in Rocks Newsagent 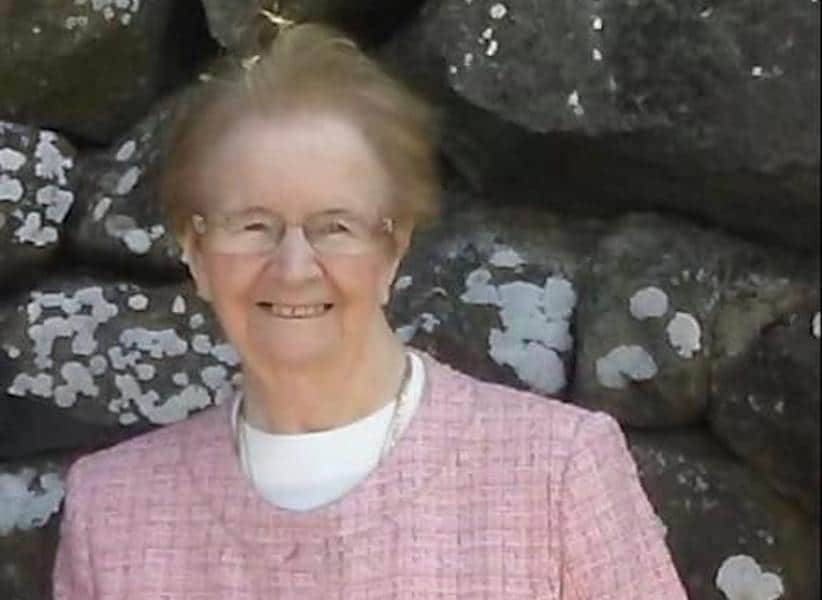 She was an absolute lady and a true Armagh icon and our city will be the poorer for her passing.

Eileen Hughes, of Legar Hill, Armagh, passed away on Sunday, and with her loss came the end of an era for Armagh.

After close to 50 years working in the retail trade, she was part of the very fabric of Armagh.

She was held in such high regard and was a familiar face to so many people over many decades, working in two family-run businesses where she was both a trusted employee and valued friend.

Due to the coronavirus impact on funerals and wakes, the good folk of Armagh wanted to come out and pay their respects and did so in style, while observing all of the social distancing necessities of these times.

Neighbours, friends and family gathered at 8pm on Monday evening to say the Rosary. And that gesture meant so much to those who will miss and mourn her most.

Eileen was formerly of the Grange and had been a resident of Legar Hill for almost 50 years, surrounded by wonderful neighbours and friends who looked out for each other.

She was predeceased by her husband Frank in 1989, and was a proud mother-of-four – Malachy, Mairead, Roisin (Rice) and Declan – and a grandmother of nine, Emma, Liam, Cathal, Eoin, Aoife, Dearbhla, Aoibhinn, Meabh and Malachy.

Eileen was devoted to her family and was a woman of great faith and a familiar face in St Malachy’s Chapel. She attended many Parish trips both at home and abroad.

She spent her working life in Thomas Street, initially in Jack McKenna’s chemist and then, for the past 30 years, in Rocks Newsagent.

Eileen loved meeting and talking to people and shared great stories of her times in Thomas Street. She would often recount that she could not walk through Armagh without meeting a familiar face and stopping for a chat.

She also enjoyed the social setting of a Monday evening when she never missed attending bingo at the Parochial Hall.

Eileen was a great supporter of Armagh GAA too. She loved nothing more than discussing Armagh’s fortunes on a Monday after a game with the many regular customers who called into the shop.

The family have been so touched by the expressions of sympathy and the shared memories of a wonderful lady who was loved and deeply regarded by all who had the privilege to have known her.

They have said that, in these difficult times, they really appreciate the support from everyone who attended the open air Rosaries in Legar Hill organised by her neighbours and wish to convey to you all their heartfelt thanks.

To all of her family and friends, we wish to offer our own deepest sympathy at this time. May she Rest in Peace.