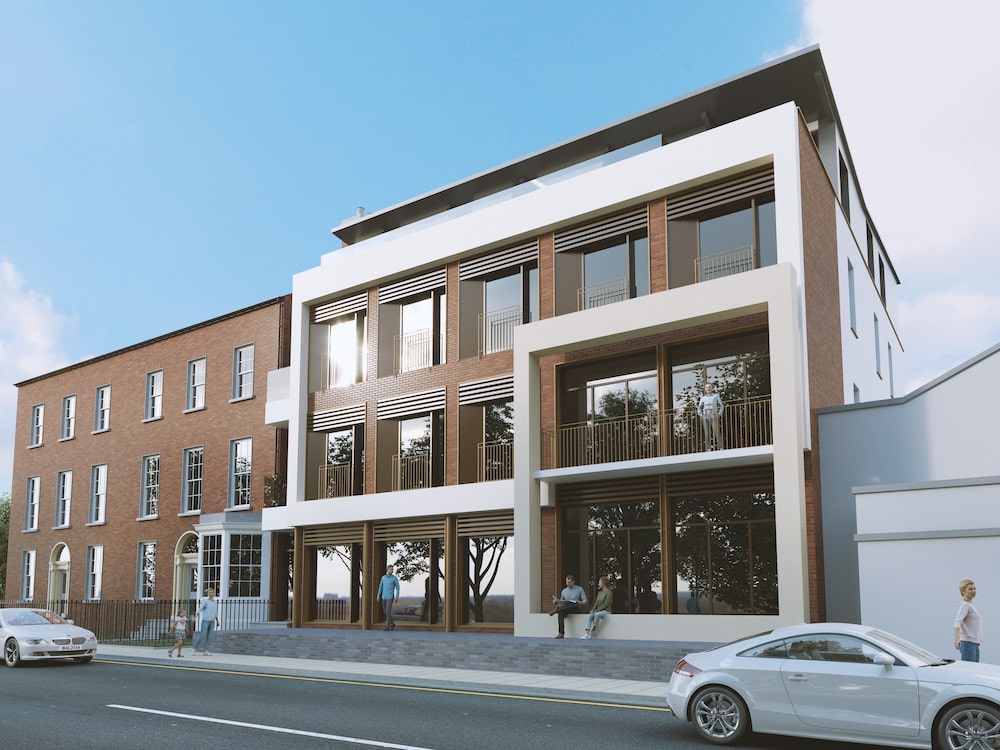 A planning application to bring 19 city centre apartments to Armagh has been approved by Armagh City, Banbridge and Craigavon Borough Council’s planning committee, despite a number of objections and concerns.

The proposal, submitted by agent Ballymullan Architect (BMA) Ltd on behalf of Tregaron Properties Ltd will see a change of use from offices to 19 apartments with associated site works including car park, railings, path and communal area at 22 Russell Street and Nos 1 and 2 Gosford Place, Armagh.

Having considered the application, Council’s planning officers recommended the committee approve the application. However, members were advised that four third party objections and a petition with five signatures had been received.

Among the primary grounds for objection were a concern that the entry from College Street will be unsafe and the proposal will generate extra traffic; the College Street access could be dangerous for pedestrians and concerns the existing parking will be used as over flow by apartment owners and visitors.

The committee also heard from an objector who expressed concerns about the flow of traffic from the development and an architect who spoke on behalf of the application and claimed it would help renew that part of The Mall.

Councillor Sam Nicholson thanked all involved for their presentations and asked how the one way system, which will forbid apartment users from exiting the site in a vehicle via College Street, would work.

A planning officer explained it is something the team have spent some time thinking about.

“The existing users access to College Street will not change, they will go about their business as they have been,” said the officer.

“To ensure these occupants of the new apartments adhere to what we are proposing, you come in off College Street and there is an access with an entrance only barrier and when they leave there is another barrier for exit to Russell Street.

“They cannot leave that central pen, so to speak, to go out onto College Street, they can only come in.

“As regards users coming in and existing users coming out on to that access way, that is not a change in relation to what has, and is, happening.”

Councillor Kevin Savage asked if the barrier and passes would be limited to residents and if that would have any impact on existing users. “The car parking spaces will be for barrier key holders only,” confirmed the officer. “Businesses will not be able to get into this parking area, this is solely for the apartments.

“In addition to that, residents will not be allowed to park in the existing communal parking area that the workers of College Street use at the present time.”

Councillor Ciaran Toman praised the applicant’s efforts to deal with parking but expressed concern about where visitors to the apartments would park.

“We feel there is a balance here, one per apartment and it will take away a demand for on street parking,” said the officer.

“We think this is a nice balance that encourages more sustainable modes of traffic but at the same time ensures there won’t be an unacceptable impact on on street parking at the present time.” Councillor Tim McClelland asked about concerns over the ownership of the College Street entrance and asked who would be responsible for the maintenance of the right of way onto College Street.

The committee was also told the entry does not appear be maintained in any meaningful way at present and perhaps users and the management company for the apartments will have to come together and look at that aspect.

Cllr Nicholson then asked about the bin collection for the apartments and what consideration had been given to that matter. He was advised it is a planning consideration and that there are dedicated storage area for the refuse in the apartments.

A proposal to approve the application was then put forward by Cllr Nicholson who said given the debate he was happy to propose the recommendation “in the round”. This proposal was seconded by Councillor Tim McClelland.

A proposal to approve an accompanying listed building consent application was put forward by Councillor Nicholson and seconded by Alderman Glenn Barr.