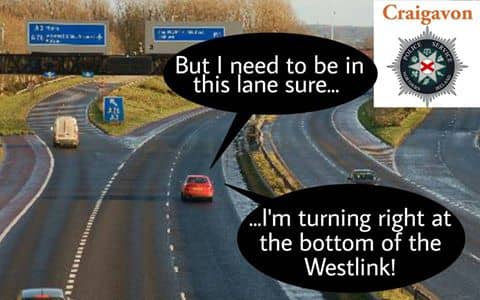 Drivers on the M1 motorway between Lurgan and Moira make a move into the right hand lane 20 miles before they’re due to turn off in BELFAST!

The PSNI took to Facebook to detail the use of the right-hand lane and why it shouldn’t be used to cruise in at 70mph.

PSNI Craigavon posted an image on their Facebook page highlighting a gripe of theirs, committed by many motorway drivers on a daily basis.

The post started: “Folks, we all get irritated by these drivers on motorways. People who, somewhere between Lurgan and Moira and usually without an indicator, make that move to get ready for the turn off 20 miles ahead. There are several reasons why people may do this. One person I spoke to told me, ‘I was doing the speed limit so why would anyone be needing to overtake me?'”

They then took to detailing the some of the things the right hand lane should NOT be used for.

1) “The fast lane”. It doesn’t matter what speed you’re doing. If the road is clear to your left, move into the left lane. The right lane is for overtaking only. Once you’re done, move in.

2) “The 70mph lane”. Some people think that if they’re at the speed limit, no one will have to over take them, therefore have a belief that it’s their divine right to hog the right hand lane. We are frequently held up at the back of a queue of traffic in the right hand lane as each person in turn finally checks their mirrors. All of us, but particularly our colleagues in Roads Policing and our Armed Response Units respond up and down the Motorway and A Road network on a daily basis to life threatening incidents. Every second can count and if we’re held up getting to a call because some thoughtless person didn’t think beyond themselves…well how would you feel if it was your family we were going to?

The post continued: “Here’s a quick story from late 2015 of a motorway incident I was involved in. We left Lurgan on a blue light run headed towards Dungannon trying to catch up with a car suspected of being involved in a kidnap. Cars being cars, lights and electrics fail from time to time. Our car chose the moment we were flying down the onslip at Lough Road onto the M1 for the blue lights to cut out

\uD83D\uDE31 That doesn’t change our need to get there as quick as we safely could, but it did change my ability to warn people of our presence.

“I came up behind a driver who at first didn’t bother to check their mirrors, and when they did, took exception to the fact that I was now flashing my lights to alert him to our presence. He then refused to move over, obviously not realising we were police. We know from calls that people regularly experience that kind of behaviour on the road from moronic drivers. It needs to stop.

“This is all aside from the road rage scenario. When inconsiderate drivers are about, they tend to meet hot headed drivers. When anger and stress levels rise, adrenalin kicks in and the focus drops. A new danger has just been created.

“Lane hogging can seem like a victimless, minor inconvenience. However, if those who did it stopped to think about the consequences, not just for other drivers but for emergency services, and therefore potentially any of their family, friends or neighbours, they would see it differently.

“If that doesn’t work for you, consider that it is an offence which could result in a ticket or a trip to court.

“2017 has just begun, lets do our bit to THINK about others when we’re on the roads. We all want to share the road to zero.”