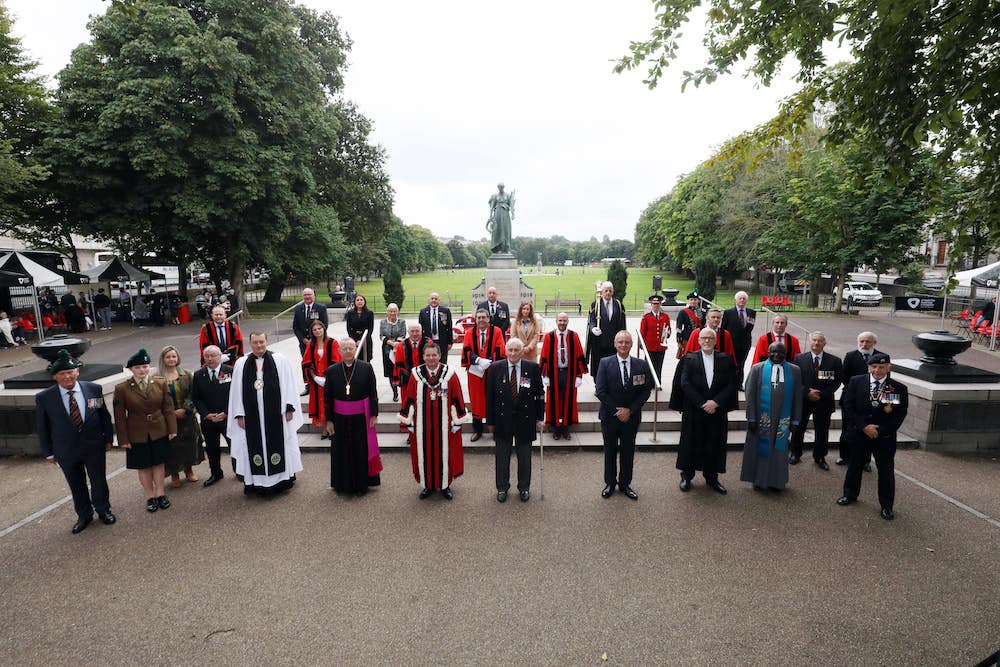 Pictured at Armagh War Memorial Service of unveiling and dedication of memorial tablets at The Mall, Armagh, September 3

A memorial service of dedication to unveil seven memorial tablets was held today (Friday) at the Mall Armagh.

In November 2020 following the hard work and efforts by volunteers at the Royal Irish Fusiliers Museum Armagh, the names of over five hundred and twenty servicemen and women from the area who died in two World Wars, were placed on Memorial tablets on the corners of the Armagh War Memorial.

Due to the Covid pandemic, the planned service of unveiling and dedication was postponed until Friday, September 3 – the anniversary of the outbreak of WW2.

A number of relatives and families of those named on the Memorial tablets were in attendance several of whom had travelled from England joined elected members, The Royal Irish Fusiliers board of Trustees, members of the Mall Trustees and the City of Armagh Branch and The Royal British Legion at the service. Ms Caroline Corvan BA curator of the Royal Irish Fusiliers Museum welcomed everyone to this special occasion and introduced Mr Stanley Burrows BEM who gave a short history of the War Memorial and paid tribute to his friend and colleague Joe Center who had been instrumental in the whole project of identifying the fallen and in getting the names on to the War Memorial.

Sadly, Joe was diagnosed with cancer but lived to see the project completed, sadly passed away in March this year.

Lord Mayor Alderman Glenn Barr spoke of the pride that the Council felt in being part of the project. He said: “This is a very poignant moment as we gather to remember the fallen and as the Council Veterans Champion, I am particularly proud.”

A short service of dedication was carried out by leaders of the four main churches and The Deputy Lieutenant read from Psalms 103. The Most Reverend Dr. Eamon Martin Roman Catholic Archbishop of Armagh and Primate of all Ireland led the service.

He prayed for the victims of hatred, war and violence throughout the world. He prayed in thanksgiving for those from these environs. They were the sons and daughters of our families who came from our streets and neighbourhoods, our townlands and parishes. Although sadly separated by religion or political tradition, they were united on the front line in courage, camaraderie and determination to defend and protect us all.

He also reflected on a pilgrimage to the battlefield he had made with the then Church of Ireland Archbishop Richard Clarke. They were accompanied by young people from across the community.

His most moving memory was watching these young people reflecting on the thousands of young Ulster and Irish people around their age, Protestant and Catholic who had died side by side in war. Malcolm Dawson on behalf of The Mall Trustees He said that these tablets will speak to the hearts of our people and encourage us to build bridges and redouble our efforts for lasting peace.

He invited The Right Reverend Dr David Bruce Moderator of the Presbyterian Church in Ireland, Rev Dr Sahr Yambasu President of the Methodist Church in Ireland and The Very Reverend Shane Forster Dean of St Patrick’s Church of Ireland Cathedral representing The Most Reverend John McDowell Archbishop of Armagh and Primate of all Ireland to assist him in the Service of Dedication.

The service concluded with the four clergymen reading together a prayer of dedication.

The Act of Remembrance, with the exhortation being spoken by David Hammerton BEM President of the City of Armagh Branch of the Royal British Legion. The Last Post and Reveille were played by Julieann Stevenson. Pictured at Armagh War Memorial Service of unveiling and dedication of memorial tablets at The Mall, Armagh, September 3

Wreathes were laid by, The Deputy Lieutenant, The Lord Mayor, The trustees of the Royal Irish Fusiliers Museum, The Royal British Legion and the families while the piper played a lament.

Malcolm Dawson spoke on behalf of the Mall Trustees paying tribute to Curator Caroline Corvan, staff and volunteers who had worked on today’s memorial service and he praised the City of Armagh Branch of the Royal British Legion for its continued work in enhancing the War Memorial and placing commemorative seating and yew trees. The Armagh War Memorial was unveiled in 1926 and now almost a century later, the fallen of Armagh are properly remembered.

Two books, one for WW1 and the second for WW2 were published, giving details of the fallen of County Armagh west of the Bann and are available to buy in the Royal Irish Fusiliers Museum.