Standing 95 metres tall and with 38 pods, the new Armagh Eye - agreed before Christmas as part of the Culture bid - will still go ahead despite losing out and stay in place until the end of 2025 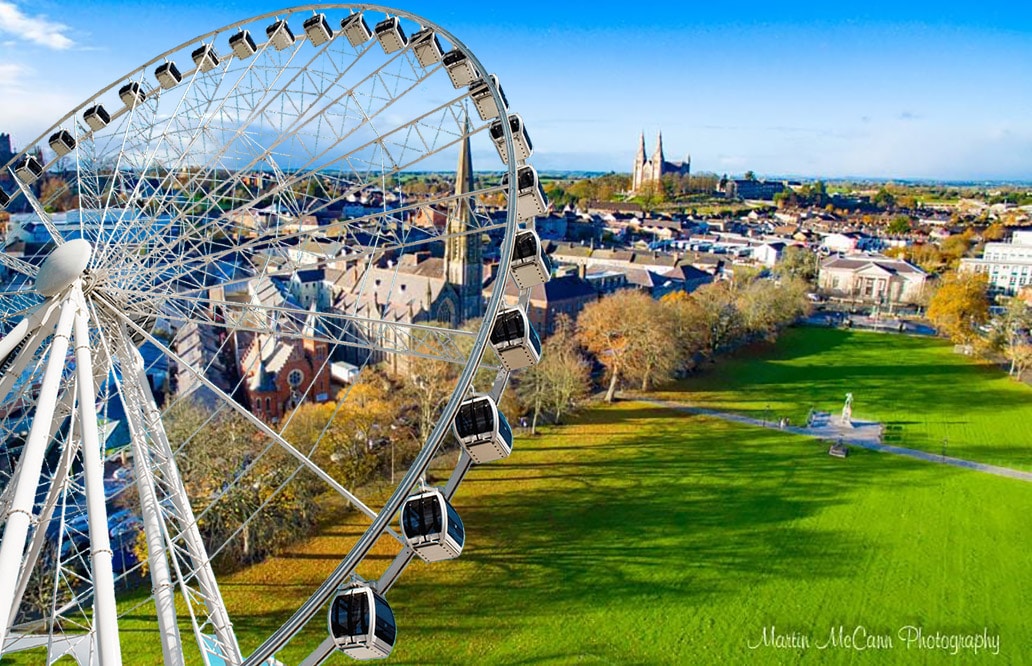 Armagh could be set to hit new heights – literally – with a fantastic new attraction to be installed on the Mall!

London has its own.

Liverpool has one too!

And now Armagh looks set to join their ranks with a new ‘super-wheel ‘ structure on its way.

Looking ahead to the City of Culture bid – but sadly now having missed out – Armagh City, Banbridge and Craigavon Borough Council had been thinking outside the proverbial box.

Over the past 12 months since it was first suggested that a bid me made for the prestigious UK title and council had wanted a stand-out attraction that would, dare we say it, put them head and shoulders above their opponents.

And, to that end, the decision had been taken well in advance to install the city’s very own ‘Armagh Eye’ (as if one Armagh I was not enough)!!

Despite having lost out on making the short-list, as confirmed last month, the ‘wheels’, excuse the pun, were already in motion and commitments given to host the wheel, which will still go ahead regardless. And so, over the next four weeks, contractors will move in to put the huge wheel in place, with the team of experts due to travel to Armagh this afternoon (Friday), April 1, for preparatory works.

Once the site has been measured and mapped out, the infrastructure will be transported to the city and erected piece by piece.

For those interested in facts and figures, the new Armagh Eye will tower to an impressive 95 metres in height – 35  metres taller than the Wheel of Liverpool but 40 metres shy of the London Eye on the Thames’ South Bank. Indeed, to put into context locally, it could put Armagh’s tallest structures – the 64 metre tall twin spires of St Patrick’s Cathedral – firmly in the shadows!

Residents of the Mall and nearby streets will be written to in advance of the actual assembly, with today’s expedition simply to plot the best possible location and take measurements; it’s a far cry from the seven metre replica of the moon which was put in place there in 2019 for celebrations surrounding the 50th anniversary of the first man on the moon, when no formal prior notification was warranted! Unless extenuating circumstances forbid it, the intended location is alongside the length of the White Walk at the lower end of the Mall.

But in order to do that, the famous cannon will have to be removed and placed into storage for the first time in its history.

Base-wise, it will require three quarters of the length to stand the wheel in temporary concrete, and the structure itself would be of sufficient height that it will not impact upon the existing trees.

It will have a total of 38 ‘pods’, which will boast seating on either side, which will be open to the public.

Sadly, there will be a cost to use the attraction, but it is expected to be kept at a minimum.

Had Armagh won the City of Culture title, it would have been offered completely free of charge, given the sponsorship, inward investment and economic benefits which would have accrued from capturing the coveted title.

February was the deadline for the City of Culture bid to be submitted.

Over recent weeks, judges had visited each and had expected to make an announcement shortly before Easter, but alas the bombshell for Armagh came earlier than expected and before any tangible signs of work on the Armagh Eye could get underway.

Rising above the disappointment, Armagh will still get to host the giant wheel for the next three-and-a-half years.

The logistics and work involved in putting in place such a piece required early confirmations to be given which is why it will still appear as contracts had been signed.

Having signed off on the project before Christmas, it means that the Armagh Eye will remain in place now until the end 0f 2025 – which would have covered the full term of the City of Culture’s special year.

Every year, some three million people visit the London Eye – or Millennium Wheel – which is regarded now as one of the City of London’s top attractions since it opened on New Year’s Eve in 1999.

Daily, it is hoped that Armagh could see an influx of 5,000 visitors specifically when the new wheel is up and running.

And that number is still anticipated despite losing out.

You could be realisticaly looking at the wheel being in place by early May, with the Lord Mayor and selected dignitaries enjoying a ‘first lap’ to mark the occasion. And a free outdoor concert is also to be staged on the Mall, plans for which are underway, to herald the wheel’s official arrival.

The Scottish-based company which delivered and put in place the London Eye, by appointment to HM The Queen, will be responsible for the new Armagh feature.

Having the specialist and technical expertise to undertake a project of this size, Royals of Plaid, located in Inverness, also played a role in the Wheel of Liverpool and the previous wheel erected at the side of the City Hall in Belfast, albeit the latter was to be temporary.

Armagh should reap the benefits of such a move and it will be a huge talking point and, it is expected, an added source of pride as the only such wheel on the whole of the island of Ireland.

Talking to Armagh I ahead of today’s initial scoping and mapping exercise, company chief executive Bryce Murray said: “Nobody could have foreseen the success story that the London Eye would become and we would be confident that that success can be replicated in Armagh.

“In taking into consideration the number of people who have been holidaying closer to home over the past couple of years, many are still of that mindset, so we would expect that more and more would enjoy days out and, when Armagh has something like this to offer, its uniqueness and excitement will be a no-brainer for families deciding what to do and where to go.

“Timing, of course, is everything. We would hope to have the early measurements and semi-permanent stand in place before the end of April and the wheel – which will be assembled on the Mall field, given the size of the individual components – erected and through safety assessments and ready for use by the second week in May, certainly well in time for the warmer weather to arrive in force.

“I think ABC Council has made a fantastic decision in acquiring the Armagh Eye. It may not have been named City of Culture this time round, but the Armagh Eye will be a legacy of a great attempt and will become a focal point for the next three years – who knows, by the end of 2025 they may not want to see it go!”

So, things are certainly looking ‘up’ for Armagh, in more ways than one, and we at Armagh I cannot wait to see our namesake grace the Mall!!