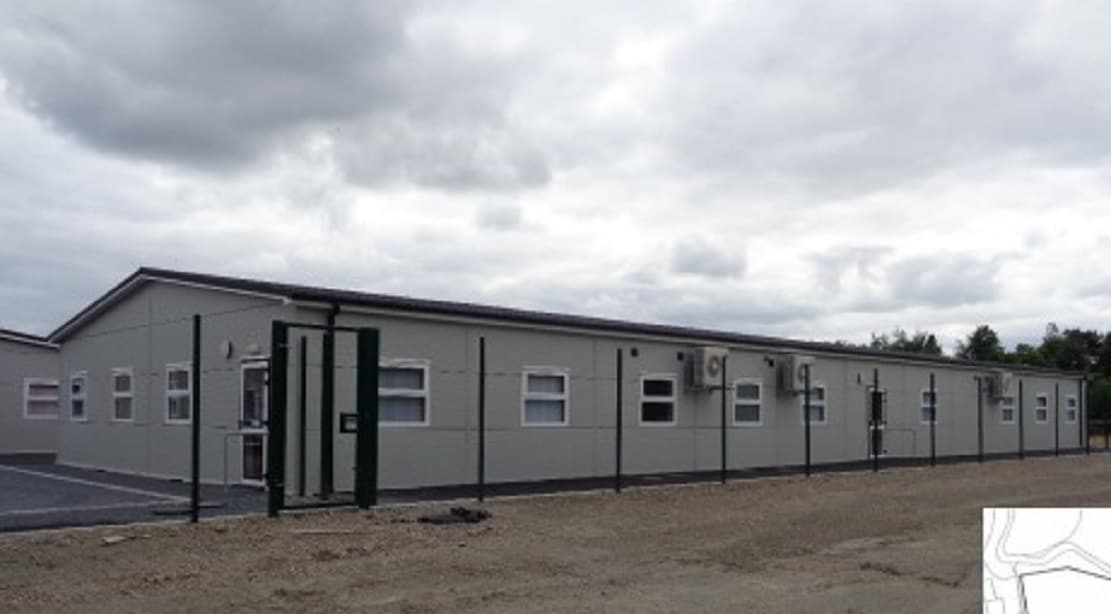 One of the units which is to be retained

Applications to retain two prefabricated units and build a new car park at a special school in Armagh have been approved, despite concerns of a potential flood risk.

The go-ahead for the project at Lisanally Special School was given by Armagh City, Banbridge and Craigavon Borough Council’s planning committee.

Permission was sought to retain the units, comprising a total of six classrooms, ancillary accommodation and the erection of a 2.4m high perimeter fence and to construct a new car park with turning circle and traffic management.

Both applications came before the committee at its meeting on Wednesday, August 3 as they had received an objection from a statutory consultee but in both cases, officers recommended the applications were approved regardless.

Members of the committee were advised DfI Rivers reservoir inundation maps indicate this site is in a potential area of inundation emanating from Lowry’s Lough.

Members were also told DfI Rivers note it has not been demonstrated that the “condition, management and maintenance regime of Lowry’s Lough is appropriate to provide sufficient assurance regarding reservoir safety so as to enable the development to proceed”.

As such, the overall hazard rating at the site is considered high by DfI Rivers. Despite this, council’s planning officers are content there are sound and justifiable reasons for departing from planning policy in this case.

A report presented to members ahead of the meeting explains there is a site specific case of need for this development as education professionals have identified the need for additional accommodation at Lisanally Special School. It also notes a flood evacuation and management plan has been provided by the applicant which shows the evacuation time in the event of a flood is considered to be less than seven minutes.

If Lowry’s Lough was to fail, it is anticipated waters would take 30 minutes to reach the site and the duration from onset of flood to its peak would be in the region of hours.

In conclusion, the report justifies officers’ recommendation to approve these applications noting “the benefits that would arise outweigh the proposal’s conflict with planning policy”.

“It is an almost an admission that they do not have the proper assurances on those things should something happen and that just strikes me as being totally irresponsible,” he said.

“In relation to the previous history of the site, one would have to assume it was acceptable at one stage to build the school there, in some way shape or form, so were these same arguments made at that stage by DfI Rivers?”

A planning officer said the school had been there for “a  considerable number of years” and it is unclear what objections, if any, were received at the point permission was sought to build it.

The chair of the committee, Councillor Kevin Savage asked the applicant’s flood consultant, Kyle Somerville, for his assessment of the likelihood of a flood on this site and was told “it was a difficult question to answer”.

Alderman Kenneth Twyble said he welcomed this application as the school has a “really good reputation and does excellent work”. He asked if developers were happy with the facilities being developed on a shale pitch.

He was told that as the children needed to be located in close proximity to the existing school, it was “vitally important the classrooms are located adjacent to the main building”.

Councillor Paul Duffy asked where Lowry’s Lough is and noted there is a lot of new housing that has been developed near Lisanally Special School in recent years.

He was told it is 5.5km upriver and the committee’s chair noted this “is a good bit outside Armagh”.

Moving to the debate stage, the chair of the committee said he was “more or less content with the applications”, noting children are already on the site and there is “unlikely to be a catastrophic event that would cause the whole school to flood”.

Councillor Peter Lavery said he would concur with this view and noted that people within this council area are “crying out for additional special educational needs capacity” and said he would “very much agree” with the recommendation to approve in this case.

Councillor Ciaran Toman said he was in agreement with the officers’ recommendation to approve the application as did Cllr Causby who said he hoped the work could be completed as “quickly as possible”.

Cllr Lavery proposed the application for the new car park at the school was approved and this was seconded by Alderman Twyble.

Cllr Causby then proposed the application for the retention of the modular units was approved and this proposal was seconded by Cllr Duffy before the committee voiced its approval for both proposals.