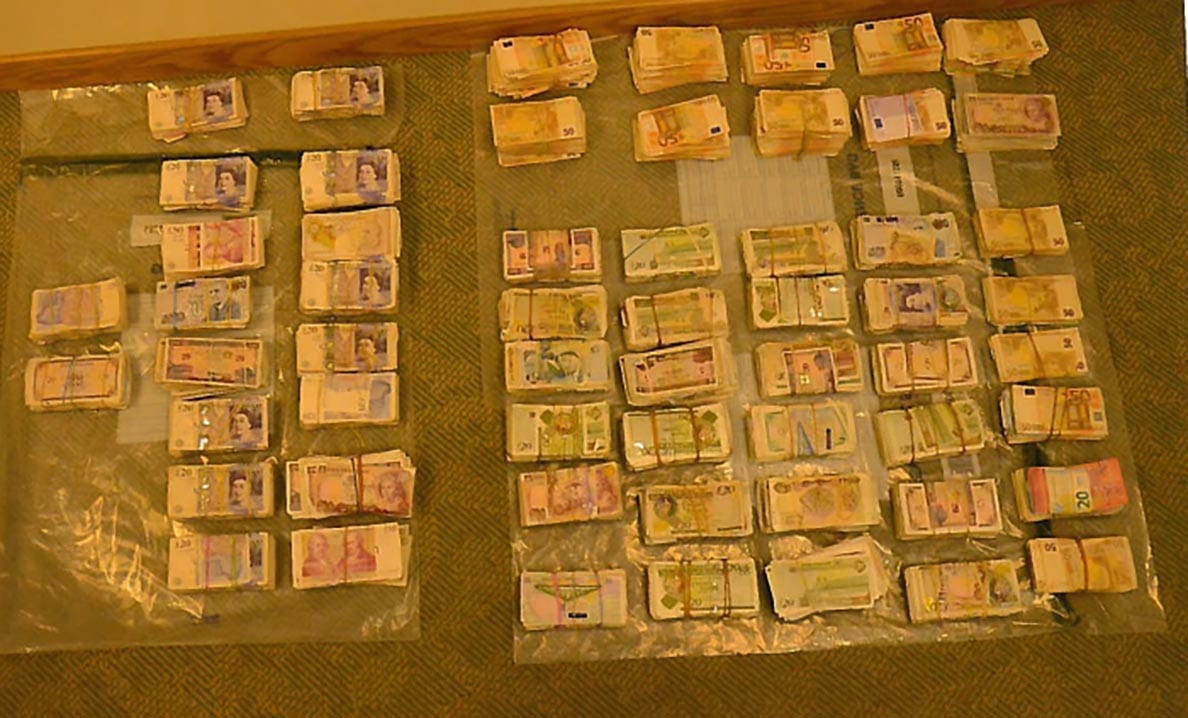 Four men from the Armagh and Omagh areas have today been given suspended prison sentences for a range of offences following a major investigation by detectives into drugs supply and money laundering.

A woman from the Armagh area was given a conditional discharge.

The proactive investigation into an organised criminal gang operating in the Armagh and Derry/Londonderry areas by PSNI’s Organised Crime Unit in 2016 resulted in approximately £585,000 in cash being taken out of the hands of criminals.

Mary Thomas was given a conditional discharge for 12 months.

On July 13, 2016 a Volkswagen Golf was spotted acting suspiciously beside a Ford Transit van in the Culdee Drive area of Armagh.

The driver of the Volkswagen, 33-year-old Eugene Thomas, was seen passing a package to the driver of the Ford Transit, 40-year-old Joseph Despard from the Salters Grange Road area of Armagh.

A short time later, officers attempted to stop the red Ford Transit van on Killylea Road in Armagh, however, the van tried to make off.

A police vehicle was forced to bring the van to a halt causing damage to both vehicles.

The Transit van was searched and a bag in the front passenger footwell was found with £10,000 in cash in it.

Despard was subsequently arrested on suspicion of possession of criminal property.

Thomas was arrested shortly afterwards, nearby, and during a follow-up search at his home address in the Callan Crescent area of Armagh officers found cash – £93,980 and 72,480 euros – concealed in the living room of the property.

Three high-end watches worth approximately £75,795 were also seized from the property.

Mary Thomas, 57, who lived with her son Eugene at Callan Crescent, was also arrested for possession of criminal property.

The next month, on August 17, police saw a lorry and an Audi car acting suspiciously in the Hanslough Road area of Armagh.

A short time later they stopped the lorry – driven by 33-year-old Darren Donnelly – on the Portadown Road and carried out a search, which turned up three bags of money in the cab.

Donnelly was arrested and subsequently charged with possession of criminal property.

Police carried out a further search at the home of 33-year-old Conor Toal in the Oakbridge area of Armagh.

During the search police seized £4,690 in cash along with four high-value watches worth approximately £20,810.

Toal was arrested and charged with possession of criminal property.

The counterfeit currency related to the seizure of 91 £1 coins during a search of his home address in Salters Grange Road, Armagh. He received nine months imprisonment, suspended for two years.

He also pleaded guilty to possession of £4,690 cash and four high-end watches valued at £20,810 found at his home address in Oakbridge, Armagh. He received two-and-a-half years imprisonment, suspended for three years.

Donnelly pleaded guilty to possessing criminal property. This was in relation to the seizure of £214,216 and 224,760 euros from his lorry on 17th August 2016. He received 12 months imprisonment, suspended for two years.

Mary Thomas pleaded guilty to concealing criminal property, namely two Rolex watches valued at £74,600 that were seized during a search on July 13 at Callan Crescent. She received a conditional discharge for 12 months.

Eugene Thomas, Joseph Despard, Conor Toal, and Mary Thomas also accepted making a series of part-payments towards the purchase of high value Rolex watches by another person at a jewellery store in Northern Ireland.

Detective Inspector McClure said: “We were very pleased to seize approximately £585,000 in cash, which was undoubtedly the proceeds of major drugs criminality. Under Proceeds of Crime legislation police will receive 50 percent of this which will be used to support further policing operations to combat organised crime and keep people safe.

“I believe the timely seizure of this cash – on two occasions in just over a month – will not only have prevented significant harm to communities, but it will also have prevented those who were in court today from profiting from their criminality.

“As well as a substantial amount of cash, high-end watches worth more than £96,605 were also seized. The five people in court today pleaded guilty to their part in this criminal enterprise.

“The PSNI is committed to making Northern Ireland a hostile environment for those in our community who are involved in serious drug criminality and money laundering.

“We will seek to identify them, arrest them and place them before the courts in order to keep communities safe.

“There will be no hiding place for them.

“I want to take this opportunity to appeal to members of the public to please, come forward with any information about the supply or use of illegal drugs or criminal activity – no matter how insignificant you think it may be.

Eighteen people so far have been charged to court in connection with this investigation. 12 people have been now been convicted and sentenced.