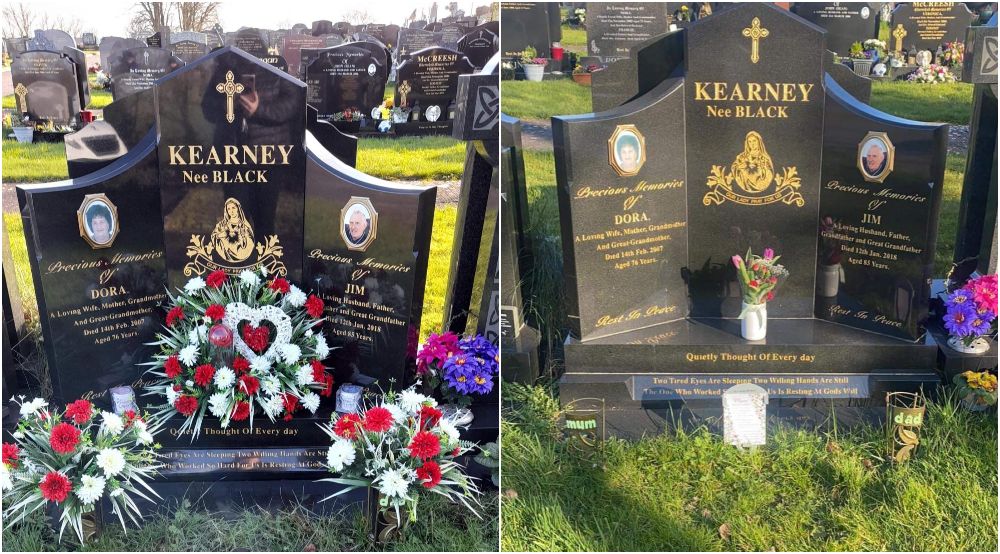 A woman whose family grave has been targeted by thieves for the second time in three months says such incidents have to stop.

Flowers were taken from Gemma Graham’s great-grandparents’ grave in St Patrick’s Cemetery in Armagh at the weekend.

The artificial arrangements had been specially made by her aunt in memory of her parents and to mark Mother’s Day on Sunday.

They were put on the grave the Monday before that. However, when Gemma’s granny went  to the graveyard four days later, they were gone.

At Christmas, flowers were stolen from the same grave.

Said Gemma: “We as a family are so upset. My aunt takes so much time, effort and pride in making them and for someone to come along and just lift them is so maddening and disrespectful and needs to stop.

“It’s an ongoing thing here. I put it up on my Facebook page and so many people had commented under it.

“One girl I know, her baby had passed away at a month old and all the stuff was stolen off his grave in the same graveyard.

“I know other graveyards have cameras. You shouldn’t have to worry about leaving flowers at a sacred place like that.

“The family are all so annoyed and to go up on Mother’s Day and find no flowers there is awful.”

The Orchard Cemetery in Richhill was also targeted on a number of occasions last year, prompting Newry and Armagh DUP’s Assembly candidate William Irwin to label the ongoing incidents a cause of “great concern”.