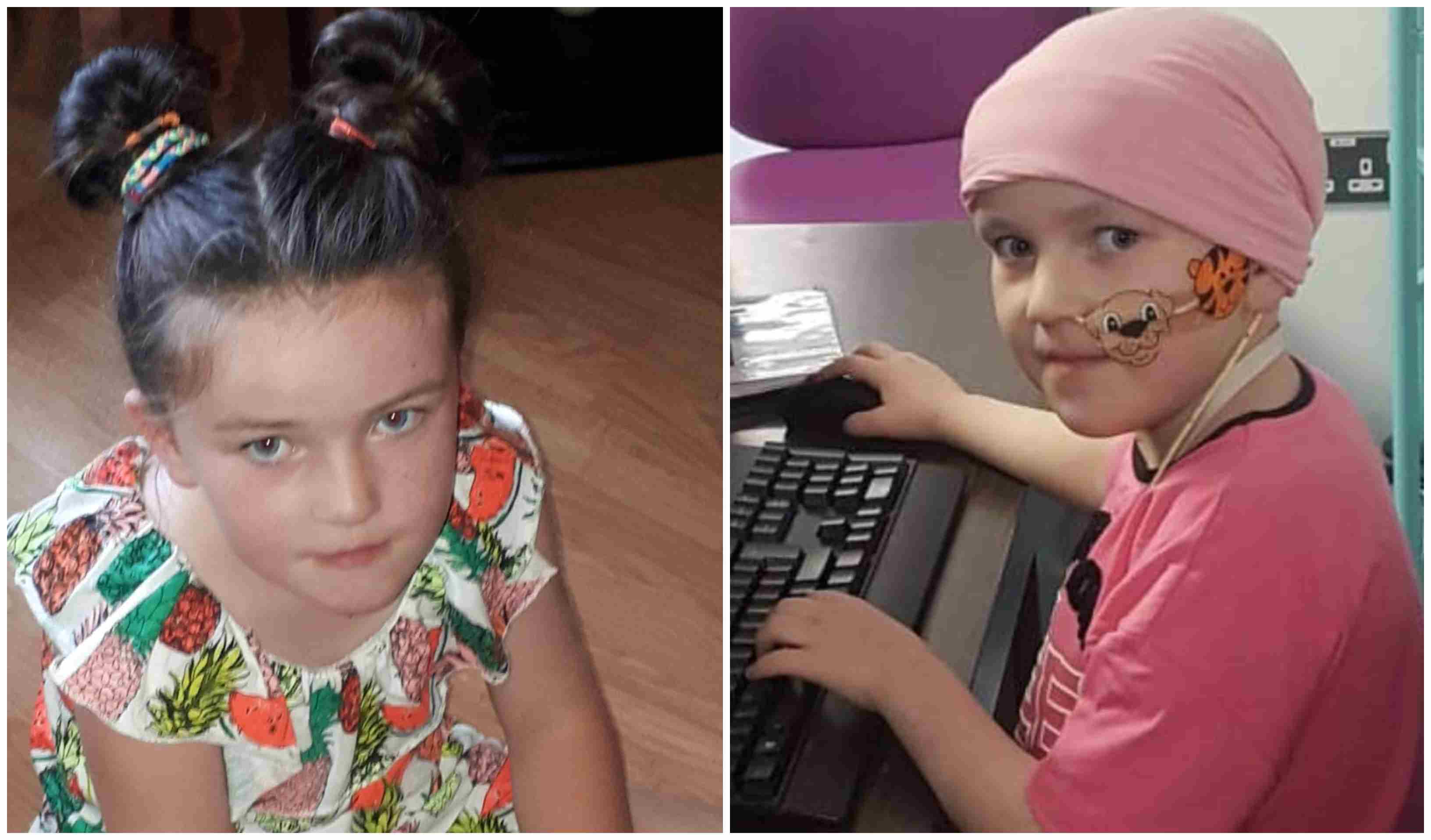 An Armagh family is working to raise awareness and funds for their little girl who is battling cancer and is asking the local public for its support.

Eight-year-old Katie Rose McKeown, who is a student at Saint Patrick’s Primary in the city and the youngest of three girls, was diagnosed with Stage 4 High-Risk Neuroblastoma in March – a highly aggressive form of childhood cancer with intensive 15 months or more of frontline treatment required.

The young Armagh girl began to feel unwell in December of last year and developed a temperature and a rash.

At first the GP thought it was Scarlet fever, however, Katie Rose began to develop a poor appetite and weight loss.

Her mother Una, speaking to Armagh I, explained: “I began to become really worried when she started to feel lethargic, she was pale and developed a limp.

“Doctors believed that the limp was an arthritic problem, which they thought was related to her diabetes.”

Due to her ongoing symptoms, the doctor requested an ultrasound of her both of the young girl’s hips.

“I had a gut feeling after hearing this news,” added Una. “I felt that there was a possibility that something more sinister was going on and asked Kevin, my husband, to come with me.”

The family soon found out that her abdomen ultrasound and physical examination revealed a possible 7cm solid mass and an MRI later showed a tumour in her abdomen.

“We will never forget the initial feelings of shock and disbelief, that this was happening to our little girl who had already so much to deal with having been diagnosed with type 1 diabetes at five-years-old,” Una continued.

One week after her diagnosis, Katie Rose began her treatment plan and completed eight induction rounds of chemotherapy and a further two rounds of TVD chemotherapy as scans showed she had partial clearance.

Following this Katie Rose had her stem cells harvested and went through surgery to have the tumour removed.

In the more recent months, she has had high dose chemotherapy followed by a stem cell transplant and after this, the youngster spent a period of time in isolation in hospital before her next step, which is will be a round of radiotherapy in the New Year.

And that’s not it. After that Katie Rose will still have to go through a further six months of gruelling immunotherapy.

“She has been so brave, we have just had to try and stay positive for her,” said mum.

“The family have had to rally together, it has been tough on her sisters too as we have had to spend a lot of time away from home.”

On November 16, Katie Rose’s Fundraising Campaign with ‘Solving Kids Cancer’ became official for potential further treatment in America, when the treatment available on the NHS reaches its limit.

Solving Kids Cancer is a charity that supports ‘Neuroblastoma’. Its aim is to help families affected by the cancer through supporting access to treatment, funding research, parent education and raising awareness.

Katie Rose’s family hope she will be in remission at the end of frontline treatment at home, but in 40-50% of children diagnosed with high-risk neuroblastoma, the cancer does return.

And once it does, the chances of long-term survival drop to less than 10%.

It means that Katie Rose’s family are raising funds in case she needs to access treatment, and this could cost hundreds of thousands of pounds.

The money will be for a vaccination in New York, which is not unfortunately not available on the NHS.

This vaccine is designed to treat cancer rather than prevent it, and it aims to get the immune system to recognise and attack cancer cells.

There are many ways you can help Katie Rose, such as making a personal donation, holding a fundraising event or getting sponsored to take on a challenge.

Una and dad Kevin are urging anyone who would like to donate, help or see more of her story to visit her Facebook page “Katie Rose’s Journey”

Donations can be made via Solving Kids Cancer here, or on the JustGiving link here.