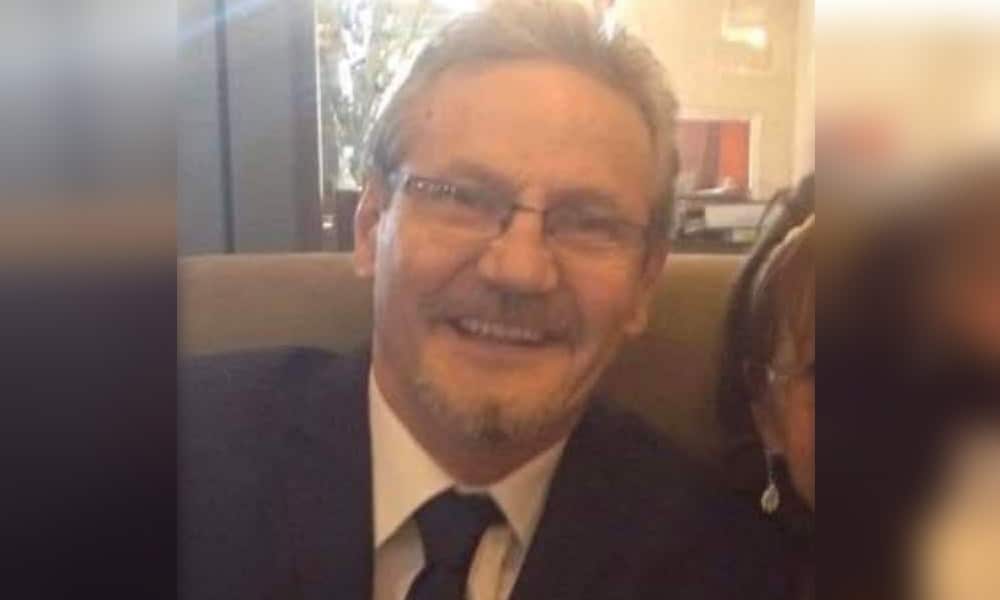 Photo supplied courtesy of the family

Friends and neighbours of an Armagh man, who died after a brave battle against Covid-19, brought great comfort to his heartbroken family by lining the streets near his home as he was ferried to his final resting place.

Tony Mitchell, who had lived at Banbrook Hill in the city, passed away peacefully in hospital on Saturday after spending several weeks there.

With no traditional wake or funeral permitted, the undertaker, JJ McArdle and Sons, passed along Banbrook on Monday morning.

Friends and neighbours gathered there to form a guard of honour and applaud, lining the route all the way from the Northern Bar as far as St Patick’s Cemetery, a special tribute to an Armagh man who meant so much to so many.

His family have been deeply comforted by the show of support for a much-loved father, brother, grandfather and great-grandfather.

Tony’s daughter, Maureen, said they had been touched by the tribute which showed the great esteem in which he was held.

Speaking ahead of his funeral Mass on Tuesday night, she told Armagh I : “Daddy was an amazing man and loved by all, which was clear to us yesterday. It just took our breath away.”

Family listened in via webcam at St Malachy’s Church on Tuesday evening when they heard those sentiments echoed by Fr Peter McAnenly.

He spoke of a family man first and foremost, who was devoted to his late wife and his daughters and grandchildren and great grandchildren.

Fr McAnenly recalled one who was a great friend to many people, a man who enjoyed the craic and who was held in such high regard; this was hugely evident, he said, by the incredible tribute paid to him at he passed his home on Banbrook Hill.

The celebrant spoke too of Tony’s love of darts, a passion which was acknowledged with a simple gesture as his remains made their way to his final resting place.

Fr McAnenly hailed “our heroes” working at Craigavon Area Hospital, as he offered the gratitude of Tony’s family for the great care afforded their father in his final days.

And he looked to the future and expressed his hope of a memorial celebration within the Parish when all this passes, to remember those who had died and support those who had lost loved ones.

Fr McAnenly said the last few weeks had been a tough time for the family since Tony had been admitted to hospital.

But he related: “Yesterday as the sun was shining and we listened to the birds sing we brought his remains to the cemetery and we laid him to rest alongside his wife Marie, who passed away five years ago.

“But despite the restrictions that are in place and there being no public wake or funeral celebration, many people have spoken of the incredible scenes at Banbrook yesterday morning and the huge numbers of people who turned out to line the streets and to pay their last farewell to Tony as his remains were brought through.

“Whilst many people turned out in force yesterday to pay their respects to a man who was well liked and held in great regard, I’m sure there will be many who will continue to be there for Tony’s family as they struggle to come to terms with their loss in the weeks and months to come.”

Fr McAnenly reflected on the loss and suffering of these times but endorsed calls for people to do what they are being asked to try and keep themselves and others safe.

“The last few weeks have been a difficult time for all of us and never before have we experienced anything like this,” he said.

“And I know that many have been struggling with the restrictions that have been placed upon us. Obviously what we have been doing with the social distancing and so on has been for our own good.

“Although many have lost their lives to Covid-19 here in Ireland and throughout the world, I can only hope and pray that our efforts to adhere to the restrictions and doing the things that we have been asked to do will help contain the virus, protect others and save lives in the future.”

Fr McAnenly, looking back upon Tony’s life, described a hard-working man who was devoted to his dear wife, Marie, and their loving family.

One of a family of seven, he was a son of the late Johnny and Nan Mitchell, and was an Armagh man through and through.

Said Fr McAnenly: “Over the years he worked in different jobs, building and brick-laying, and was a general handyman at different jobs around town and beyond.

“He and Marie got married almost 50 years ago and after they got married they lived at Gillis Row and then Druid’s Villas, but Banbrook had been their home for many long years.

“As his family said, he was a good husband and father and a great grandfather. I know that his family have wonderful memories of him and memories of great family times they shared with he and Marie over the years.

“As one of his daughters said last night, he was a wonderful father. His children, she said, they wanted for nothing and their father worked and he worked hard to provide for their needs.

“He loved the craic, he had a great sense of humour and being a good singer he loved an old sing-song. There was no bother of course to Tony to rhyme off a few songs when he was out for an evening.

“He was a very sociable man; he enjoyed people and people enjoyed him and over the years he built up a great network of friends.

“He loved his wee jaunt over to Raffertys’ or to Mickey Kelly’s or to the Vintage for a few drinks and to have the banter and the chat with a few of his friends.”

Fr McAnenly also spoke of Tony’s love of gardening and said he would have spent endless hours in his garden at this time of year, describing it as a “great labour of love for him”.

He recounted too his love of bullets – through which he again made many friends – and his talent for darts, for which he said he would be especially remembered.

Fr McAnenly went on to highlight a moving moment on Tony’s last journey when he added: “As his remains were slowly brought towards the graveyard yesterday morning someone had a dart board and three darts placed on a table on the side of the road up over at Druid’s Villas, reminding all of the great thrower that he was and the pleasure and enjoyment that he got from the game.

“I believe he played many of the big names in the world of darts including John Lowe and many others.

“But whatever about Tony having hit the bullseye on many’s an occasion during the years of his life, I’m sure he’s now scored or hit what matters most and I’m sure he’s now at one new life with God, peace and happiness in his presence forever.”

As he looked at Tony’s last years and his final weeks, Fr McAnenly said there was much to be grateful for.

“I know Marie’s passing a few years ago was a great blow to him but thankfully he had been living a very full and active life up until just a few weeks ago,” he added.

“I know his family would like me to publicly acknowledge and thank the many staff in Craigavon Hospital who cared for him so well over the last few weeks.

“Those staff who have been working and continue to work in the most difficult of circumstances are our real heroes and are so deserving of our admiration and praise.

“And God willing when all this passes and when things become easier for us we will have a memorial celebration here in the Parish for all those who have lost their lives to this pandemic and also for their families.

“It will be an opportunity for all of us to come together to remember those who have passed and an opportunity to offer support and solidarity with their loved ones.”

As he concluded the funeral Mass, Fr McAnenly added: “May Tony enjoy being reunited with his wife Marie and with his parents and with his sisters Philomena and Maureen and all those who have gone before him. May his soul and the souls of all the faithful departed, to the mercy of God, may he rest in peace.”

To them all – and his wider family circle and friends – we offer our deepest sympathy at this time.