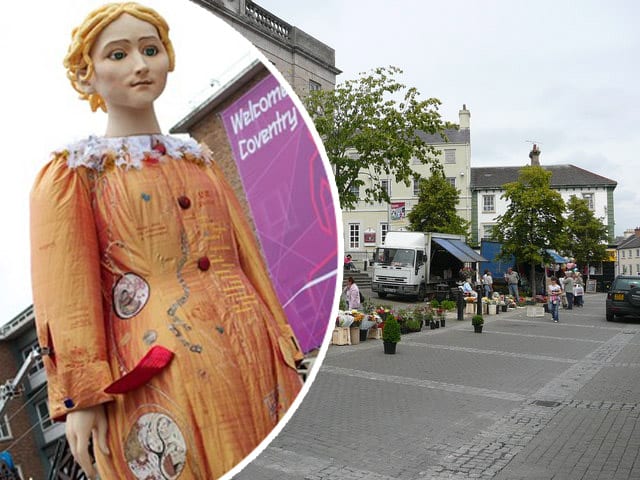 A six-metre figure of Macha – at a cost of £240,000 – could be used to boost the local economy and to ‘sell’ Armagh to international visitors.

That’s according to the team who would provide the marionette if Armagh City, Banbridge and Craigavon Borough Council agrees to proceed with the plan.

No decision has been taken in that regard.

But representatives from Imagineer Productions were making a presentation at a meeting of the council’s economic development and regeneration committee in Craigavon tonight (Tuesday).

Armagh I revealed in February that the council was considering the purchase, although funding is currently being sought for this ambitious project, however, it remains to be seen how much the Council would input should they go ahead.

It was during the tender for an artistic director for Navan in 2014 that the ‘Armagh and the Goddess Macha’ project first emerged from the Coventry-based Imagineer Productions.

The concept was based on their first model – ‘Godiva Awakes’ (pictured) – created two years earlier as one of the major projects for the London 2012 Cultural Olympiad.

Godiva was a six-metre tall marionette, which is fully functional in movement, can walk through towns, along highways and is operated by a team of five puppeteers supported by a team from within the local community and trained by Imagineer Productions.

Macha would be likewise, and last year council granted officers permission to have Imagineer Productions carry out a feasibilty report.

A briefing presentation – together with a short video – were being shown at the committee meeting tonight.

According to Imagineer Production, it is a project that would be carried out in three phases.

The figure has been described as “an extraordinary and world class piece of public art connecting communities worldwide to the unique culture and heritage” of the ABC borough.

The first phase would involve ‘building’ Macha, involving communities, education and business across Armagh, Banbridge and Craigavon in her creation.

The second, it is proposed, would be the running of a new signature festival ‘Macha’s Feast’ – highlighted as having the potential to be a unique selling point for further development of regional, national and international tourism. Godiva in Coventry a number of years back

The third phase would be for the creation of a semi-permanent home for Macha at Navan Fort.

According to Imagineer, creating Macha “will breed excitement, a sense of community purpose and ambition, a change to ordinary everyday lives, connecting people and communities together”.

During the course of the presentation, councillors were told: “Creating Macha has the potential we belive to add significant value to the growth of the economy and to build on your successes to date.

“The key is to involve businesses and the retail sector and unique shopping experience of the region, in particular small shops, bars and cafés.

“It will need the full confidence and commitment of the council to create a brand and experience that will promote the region worldwide.

“The Tourism Northern Ireland Attitude Survey 2014 cited Armagh as the least likely to be considered ‘unique’. It was considered to be ‘friendly’, ‘enlightening’, ‘traditional’.

“We believe ‘Creating Macha’ will change that perception.”

Councillors were also told that the time for such a development was “right for Armagh and for Northern Ireland”.

“There is a resurgence and high interest in all things Celtic aided by the popularity of The Game of Thrones,” according to the presentation.

They also quoted Richard Williams, CEO of Northern Ireland Screen, as saying: “At some point, we have to deliver a national scale Irish myths and legends show. I think it has to happen and it will happen.

“There is a huge enthusiasm to internationalise what we’ve got, to take our wares and take our place in the world.”

Committee members were urged to “seize this opportunity to create an extraordinary giant, a feat of art and engineering”, which would be a gateway to the ancient past, engaging and inspiring new audiences.”

Again it must be stressed, no decisions have been taken at this time and any recommendations at any time would have to come back to full council to be formally ratified.