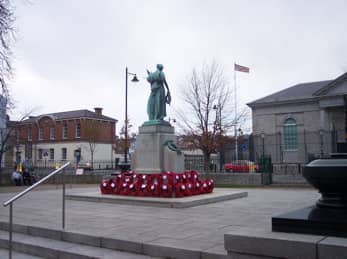 Remembrance Day services will be held across the county tomorrow (Sunday) as Armagh pays its respects to those who died in two World Wars and more recent conflicts at home and abroad.

The Lord Mayor of Armagh City, Banbridge and Craigavon Borough Council, Councillor Darryn Causby, will attend the Remembrance Day in Armagh in the morning, before participating in Banbridge in the afternoon. In the city, the parade will form up outside the Armagh Branch of the Royal British Legion’s premises at Dobbin Street at 10.15am, making its way through the city centre en route to the Cenotaph, led as usual by Armagh Old Boys’ Band.

The wreath-laying and Act of Rembrance will be conducted, along with the sounding of The Last Post and Reveille and the service takes place in 1st Armagh Presbyterian Church.

Among the wreaths to be laid will be those by ex-Service personnel, armed forces, uniformed organisations, youth organisations, community groupings and political representatives.

In Portadown, the parade will form up outside the Legion premises at Thomas Street at 10.15am and the service, after proceedings at the town Cenotaph, will be held in Thomas Street Methodist Church.

At Richhill, the parade, moving to the War Memorial in the Square for 10.45am, will be accompanied by Ballytyrone Accordion Band and Corcain Flute Band and, after wreaths are laid and a brief service, will make its way to Richhill Presbyterian Church on the Corcreevy Road.

The parade in Loughgall is at 11.15am, with a service at St Luke’s Parish Church after the wreath-laying at the village War Memorial.

In Tandragee, the wreath-laying takes place at the War Memorial at Cornmarket Street and will be led there by Moneyslane Flute Band, for 10.15am. The service which will follow is in the nearby Ballymore Parish Church.

Proceedings in Markethill get underway, as usual, in the afternoon. It takes place at 3pm, with wreaths laid as the parade passes by the War Memorial at the bottom of Main Street.

Four bands will take part – Markethill Pipe, John Hunter Memorial Accordion, Tyrones Ditches Pipe and Mullabrack Accordion – and this year the service will be held in the local Methodist Church.