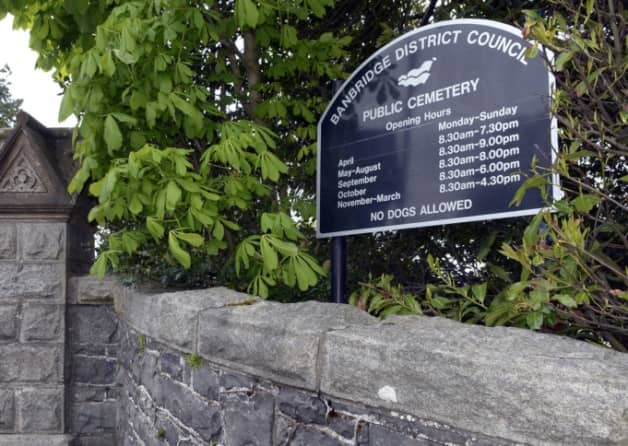 The only two council-owned cemeteries in Armagh City and District will be full to capacity in less than nine years.

And officials from Armagh City, Banbridge and Craigavon Borough Council will have to plan ahead to ensure future provision and needs is met.

The council owns six cemeteries across the borough, with the life-span of these ranging from just years to decades.

The situation has also led to the local authority having to place restrictions on advance booking on plots, it has been revealed.

The Orchard Cemetery – on the Corcreevy Road in Richhill – was officially opened and consecrated in 2002.

But based on past patterns and estimates, available plots at that municipal cemetery – currently in the region of 280 – are expected to be exhausted before the end of the decade.

And at Ballynahone Cemetery in Armagh City, available plots there – just over 700 – are expected to be taken in just over eight years time.

The two cemeteries in the former Banbridge Council are projected to serve local needs for the next 42 years, with over 2,200 graves.

In the former Craigavon Council area, it is forecasts that the two council-owned cemeteries – Kernan in Portadown and Lurgan – will be at capacity in less than six years, with collectively less than 1,000 plots.

Details on the expected availability of plots has now been passed on to the council’s estates team who will be forced to plan for the sustainable provision of cemetery plots across the borough.

A further report will be brought to back to council committee once that analysis has been completed.

Council has previously agreed that advance plot sales will only be available in those cemeteries which have provision for five years and more – ruling out Orchard, Kernan and Lurgan.

Of the three remaining, only a tenth of those graves available can be sold in advance in any one year.

It is also now expected an age restriction will be put in place in relation to sales in advance, and that they can only be bought by or for people who live in the borough or have spent a “significant proportion of their life” as a resident of the borough.

The information applies only to council-owned cemeteries and not those graveyards and cemeteries under the responsibility of the various churches across the district.

In recent times, planning approval has been given for a major extension to the cemetery at St Patrick’s RC Cathedral in Armagh, and the graveyard at Tandragee Presbyterian Church.