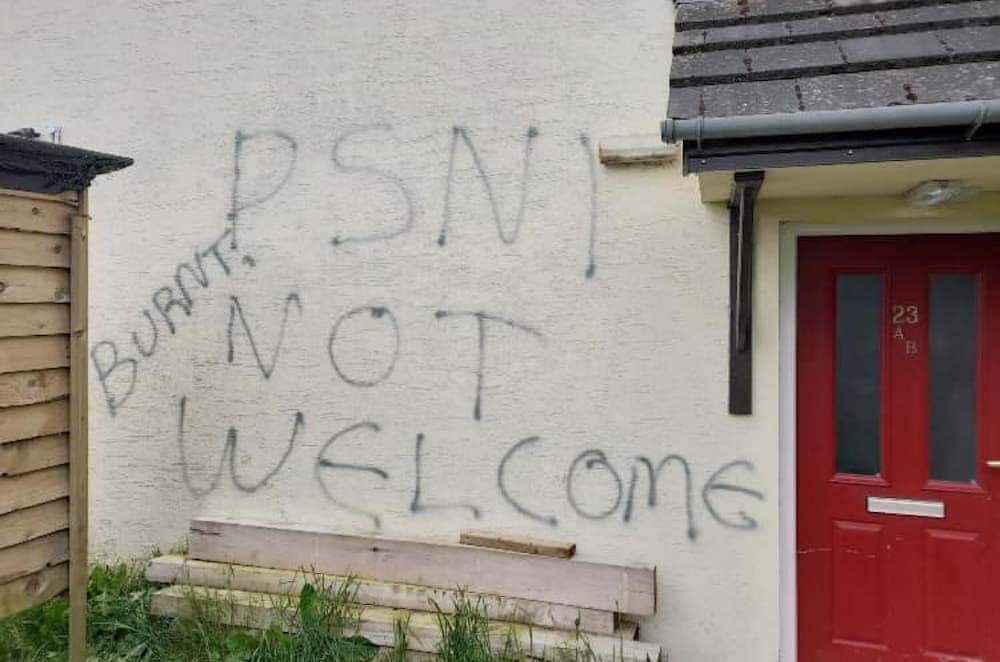 A community house in Armagh has been vandalised reportedly in response to a planned meeting with the PSNI next week.

Mullacreevie Development Association are set to host a public meeting with representatives from Housing Executive and community police with anti-social issues high on the agenda.

However, the Association has faced criticism online, for their invitation extending to the police, from a group titled ‘The Irish Republican Resistance’.

Posting this image on social media, Mullacreevie Development Association (MDA), said the graffiti, which was daubed across the wall stating ‘PSNI not welcome’, was clearly “related to the issue of a meeting next week”.

“The MDA totally condemn the vandalism and call on all residents to do so as well,” they posted on social media. “We would also call on the group who have so vocally opposed this meeting to condemn the vandals responsible for this attack on a very valuable community facility.”

The West Armagh Consortium also released a statement, saying the local community group in Mullacreevie are “angry at the vandalising of their community house”.

“[The Association] see this action as being directly related to an issue that has arisen about a proposed meeting with local providers, which will include PSNI representatives.

“The Housing Executive and the Neighbourhood Renewal Partnership have also been invited to the meeting to discuss a wide variety of issues that residents have raised, including home repairs, community projects, anti- social behaviour and fly tipping. The invite has also been extended via social media to estates adjacent to Mullacreevie as many of the issues up for discussion also impacts on them.

“A group calling itself The Irish Republican Resistance immediately went on social media to criticise the meeting and have called upon ‘republicans’ to mount a protest at it. So far social media has not shown high support for this group’s position. But it would now appear that it has been escalated to vandalising the community house.

“Calls have gone out to the Irish Republican Resistance to respond to this wanton vandalism. Questions have been asked. Will they distance themselves from these actions that would appear to be carried out in support of their position or do they support this type of anti-social behaviour directed at a community facility?

“This graffiti while being unsightly will also come with a cost for its removal which has prompted other questions.Who will pay for this? Will it be those supporting the vandals’ position or will the local community group be expected to use funds earmarked for community projects to remove the vandalism on the community house.

“It is widely accepted that the community house is a fantastic community facility that is used by a variety of community based groups and local residents. These groups deliver an array of programmes that benefit local residents and the community from further afield.  The community house is a purposely renovated facility. Funding for its renovation was not easy to acquire and was a collaboration between Housing Executive and The Neighbourhood Renewal Partnership Board.  The Neighbourhood Renewal Board continues to help with its upkeep.

“Local community representatives are puzzled as to why this group should be objecting to the presence of the PSNI now, when they have been present at meetings in the past. Who would the Irish Republican Resistance suggest residents turn to, to address some of the anti-social issues that have occurred in the estate.

“If a resident’s house or other property is stolen or vandalised, should they contact the Irish Republican Resistance to seek an address, and if they should, how can they go about doing so? While the community group accepts that people have differing opinions towards the police, the reality is that they are contacted by many residents concerning some of the issues mentioned.

“It also has to be said that this contact is not always responded to satisfactorily by the PSNI and such meetings are also used to hold the police to account.”