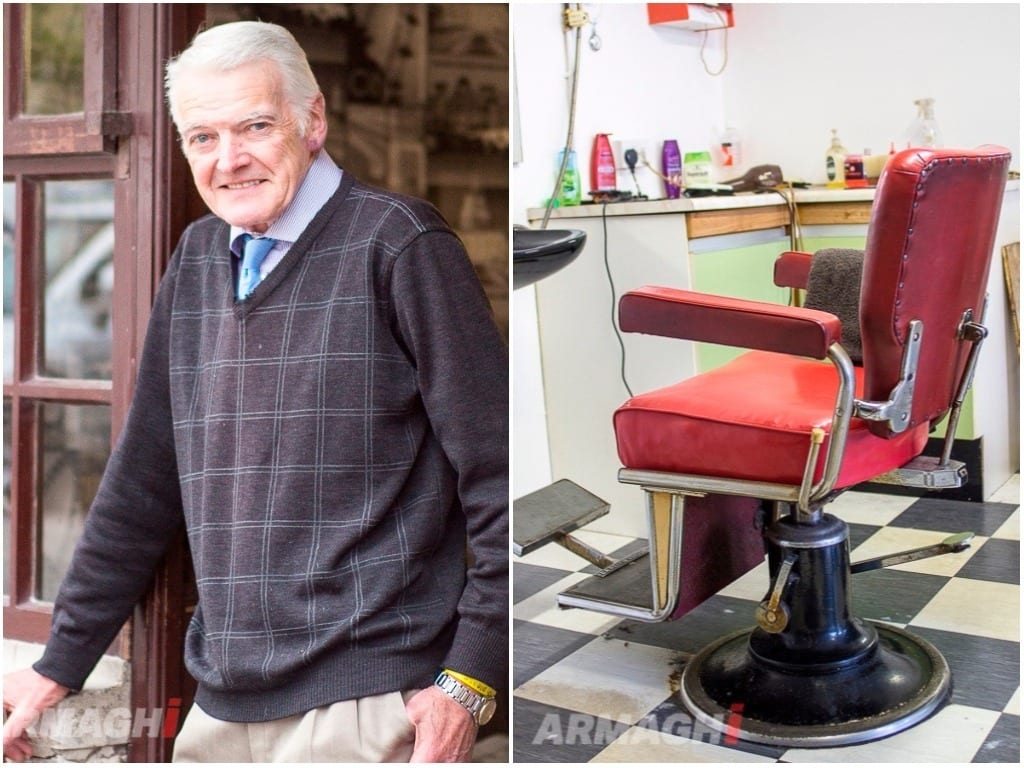 People have come and gone like a cavalcade through a town which has witnessed abounding change of the last four or more decades.

Few things have remained constant; the factories have dwindled and the town centre has changed irrevocably.

Armagh has witnessed many changes – city status for one – but one of the few remaining ‘city’ institutions will bid a final farewell next weekend.

Tucked away, almost out of sight – but certainly not out of mind – Colin McArdle, a barber in the city 38 years will lay down his scissors in his traditional Abbey Lane shop for the final time next Saturday (May 12).

Like a changing of the guard, Mr McArdle – who will make way for a beauticians – says there comes a time when you just have to give in to father time.

The 73-year-old, speaking to Armagh I, from his city centre shop, says he’s had “a great run” but it’s now time to hand over the baton to younger hands.

“There might be a couple of years left in me and I want to enjoy them,” smiled Mr McArdle.

“My family are delighted – delighted – and customers disappointed; you can’t please everyone, so I just left it up to myself. I think it’s time.

“The last day will be tinged with a lot of sadness, there’ll be tears surely. You get attached to things and I’m a creature of habit. I don’t like the thought of leaving it but you have got to give into age and health.”

When he moved into his Abbey Lane home in 1980, Mr McArdle was one of the first barbers in the town, and for that reason he says, a living wasn’t too hard to come by.

“From the day I opened I was busy, they were watching waiting for me to open so they were,” he beamed. “There was nobody else about. David Mulvey was here before me but there was enough work for the two of us and the two of us made a good living out of it.

“There are plenty in the town now but luckily we had our turn, had our day, so they can have what’s left. It was a great run, busy from the start; and I reared my entire family on this little place.”

This little place was merely a shed when Mr McArdle got his hands on it; purchasing an old tin shed from the deceased Mark Allen; a shed which housed second-hand furniture at the time.

Having spent 20 years in Manchester, where he learnt his trade, Mr McArdle, a native of Tassagh, made his way back home to where his heart was.

“I moved to Manchester when I was 10 or 11 years old and spent my first five years as an apprentice before I went out on my own.”

He cocked his head back in thought. “I have been self-employed now 53 years now,” he duly recalled.

And during his four decades in Armagh, Mr McArdle has watched on as times changed around him but like any good service, he had his loyal customers.

“Oh, my customers have all been loyal, very few have left me,” he said with a great sense of pride. “If they have left it’s because they had to go elsewhere to find jobs.

“The average working man in this town is away at 7am in the morning and doesn’t get home to 7 at night. The rest are all working away in Scotland, England or Australia now.”

He added: “The changes I have seen in this town have been extraordinary. All the small factories have closed over the years – those factories kept the town together. It’s a world away from that now.”

When he walks away for the final time next Saturday, Mr McArdle insists he will take very few mementos but “I will take all the memories with me; they’ve all been happy”.

“The only sad memory I have,” he continues, “is when my mum and dad died. They didn’t see the end result, how I managed to get my business to where it got to. I was only just getting on my feet when they died.”

Despite having his parents miss out on what was a fantastic career, his own children got to witness something special.

“I have a family I know who are proud, they all think, daddy, daddy, daddy; what does daddy think? What would daddy do? Would he do it that way? They all come to me for advice.”

And that same family, he says, will keep him very busy in his ‘retirement’.

“I have a new rake dad, want to try it out?” he chuckles. “It’s not retirement as such, it’s more like being re-occupied.”

But Mr McArdle was never one for rest.

“Oh there’s plenty of work at home; painting, building, lawn-mowing, you name it, I won’t be idle. I’m not going to sit and vegetate, that’s for sure, I never have done. Always been an 18-hour day man.

“I’d finish here at 6pm, get home and have my tea, before I’d get into my old working clothes and start painting the house or something. It’d be 10.30pm before I’d get finished. So there’s no way I’ll be resting too much.”

As understated as his shop ‘Gents Hairdressing’, Mr McArdle isn’t looking for much fanfare on his final day; the only difference that day will bring is the man coming in to pick up his antique chairs – the twins.

Pointing towards the red and black, aged – rather like a fine wine – chairs, Mr McArdle alludes to the fact his father bought him those chairs in 1979.

“He bought them second-hand in Manchester,” he said. “Those chairs were made in 1940; so 78-years-old. They’re worth more now than when they were made.”

But unlike his chairs, Mr McArdle says age doesn’t agree with him just as well but believes it’s high time “someone else paid those rates”.

He concluded by thanking “everyone for their custom over the years”.

Farewell to a city institution and good luck in your retirement Mr McArdle.

He may have left his store but if you would like MrMcArdle to cut your hair in your home, he’s still available for calls on 07543168441.