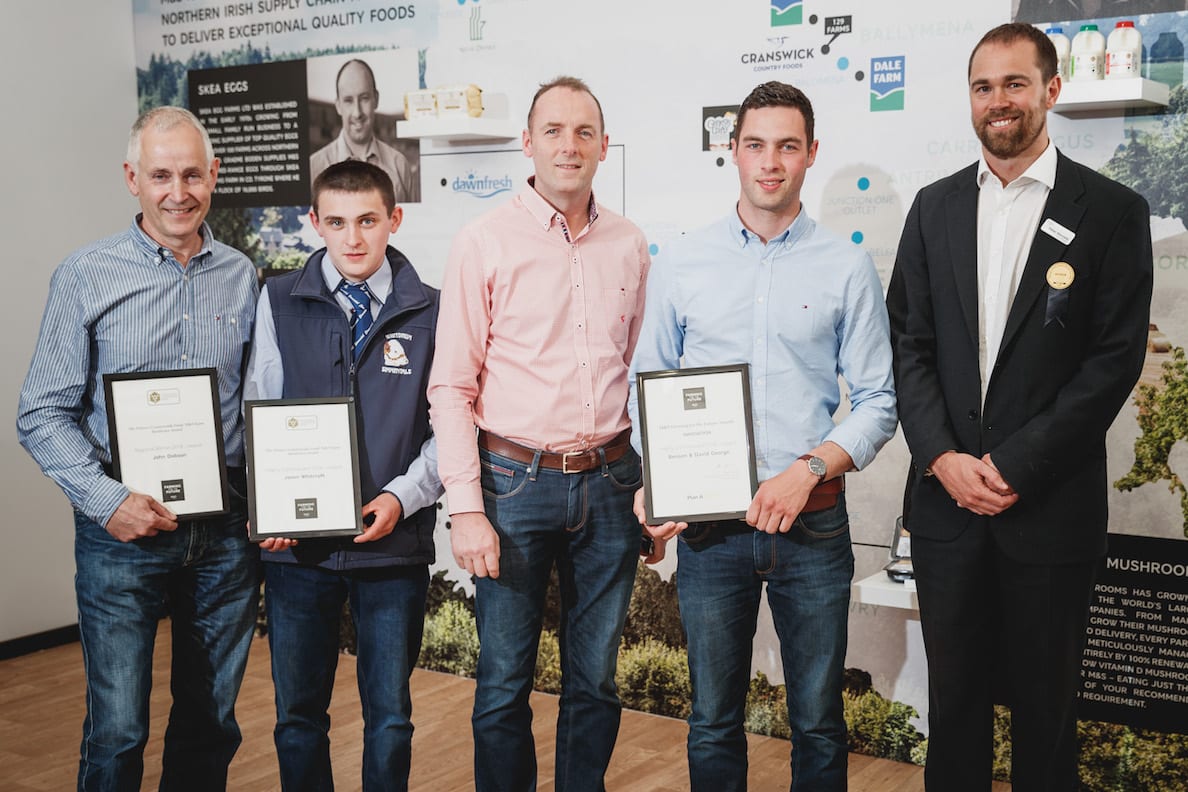 Three local producers for Marks & Spencer have been rewarded at a M&S ‘Farming for the Future’ Award presentation, which took place at the Balmoral Show.

The Prince’s Countryside Fund is a charity which supports rural communities, and the award John won is designed to recognise producers in the food chain who are going the extra mile to support local communities.

Building resilience into his business has been a key focus for beef producer, John, who manages a 110-strong Aberdeen Angus suckler herd.

John first established his suckler enterprise in 1986 and used to buy in cattle for finishing to supplement the youngstock produced by the herd. John reassessed this approach due to volatility in the price he was paying for cattle, which was putting pressure on profit margins and adding unpredictability into his business model.

In response, he gradually increased the size of his suckler herd to produce more of his own cattle to finish, reducing his need to buy in animals and shielding his business from the uncertainty of changing market prices.

To improve cattle performance and drive business efficiency, John has also invested in a new calving unit, upgrades to cow housing and spent years researching animal genomics to ensure that he finds the best bulls to match his cows.

“I have always been looking at ways to improve the business and ensure its long-term sustainability,” explains John.

“Part of this has involved working closely with, and learning from, other beef producers in the US, Canada and Europe to see what I can do to enhance my beef enterprise and minimise the risk that is an inherent part of any farming business.

“Part of this risk minimisation strategy has been to make my beef enterprise entirely self-sufficient in cereals and forage – the components that form the largest part of my herd’s rations.

“By reducing the reliance on bought-in feed, we protect ourselves from fluctuations in feed prices caused by volatile market forces.”

Despite running a busy farm, John still finds the time to share his experience and knowledge with other producers and has mentored many young beef farmers from across Northern Ireland, to help them improve the resilience of their own businesses.
Claire Saunders, Director of The Prince’s Countryside Fund said: “Farming is at the centre of so many rural communities, and we are delighted to work with M&S on this award. John’s commitment to mentoring the beef farmers of the future is very impressive, and absolutely exemplifies what the Fund works to support in the British countryside.”

Benson George and his son, David who farm in Armagh scooped runner-up in the Innovation Category.

Benson and David, from Tullysaran Farms Ltd, are not afraid to try something different, as their current range of enterprises prove.

Together with Benson’s wife, Laraine, the family run eight broiler houses, as well as finishing 100 Aberdeen Angus beef cattle each year which are supplied to M&S through Linden Foods. In addition to this, the team also run a printing business from the farm, specialising in large scale printing as well as PVC stickers for agricultural machinery.

“I’ve always been interested in design and so, twenty years ago, we started the printing business to run alongside our other enterprises,” explains Benson.

“It’s a surprisingly good fit and provides a steady income that complements the more volatile poultry and livestock markets that we operate in. This year we have bought a small flock of sheep too, so we are definitely making sure that all of our eggs are not in the same basket!”

Keith Williamson from Linden Foods explains why he nominated Benson and David for the M&S innovation award: “What is great about the George family is not only have they diversified to safeguard the farm’s future, but they’ve used their learnings from one enterprise to inform another.

“For example, processes in the poultry industry are extremely streamlined and efficient – Benson and David have approached their beef enterprise in the same way, seeking to produce a uniform animal that conforms well to market specifications and which follows a strict health plan to achieve the best results. I’m delighted that they have been selected as a finalist in the M&S Innovation category.”

Jason grew up helping his father on the family’s beef farm.

It was always Jason’s ambition to work in the agricultural industry, and since 2017 he has taken on a full-time role in the family business, running the enterprise’s new calf rearing unit as well as helping care for the existing 40-strong suckler beef herd. The farm also buys in Aberdeen Angus cattle for finishing and supplies M&S with beef through Linden Foods.

After leaving secondary school Jason knew that he needed to secure an extra source of revenue to help provide him an income and guarantee the farm’s sustainability.

Jason therefore approached, and then worked in collaboration with, Linden Foods to develop a new calf-rearing unit on the farm.
The construction of the new calf-rearing unit was completed in May 2017, and the first batch of calves arrived the following month. Jason now oversees the day-to-day running of the new enterprise, and he rears 480 calves a year for Linden Foods.
“I take in calves when they around a month old,” explains Jason.

“The aim is for calves to then leave the farm when they are between 120-130kg in weight, ready for the next stage in the rearing process. Growth rates can vary, but we never have a calf on site beyond 12 weeks of age.”

With the new calf rearing enterprise, Jason has helped to secure the long-term future of the farm, as Keith Williamson, from M&S beef supplier Linden Foods, explains: “Jason’s calf rearing unit performs exceptionally well and the animals that he produces are a credit to his skills as a stockman. He knew that he needed to develop a new enterprise on the farm to help support him into the future and, thanks to a lot of skill and hard work, he has achieved this.”

Jason’s quality as a stockman is reinforced by the success that he has also had with his small herd of pedigree Simmental cattle; winning the Northern Ireland Simmental Club’s Young Stockperson of the Year Award, two years in a row.

Steve McLean, Head of Agriculture and Fisheries at M&S said: “The Farming for the Future awards are now in their eleventh year, acknowledging the dedication and commitment our farmers and growers are making towards Plan A and sharing best
practice amongst the agricultural community across Ireland and the UK.

“John, Jason and the George family are all very worthy winners and have proved this by demonstrating their innovative thinking, commercial success and social responsibility in the way they manage and execute their business.

“Our judges were particularly impressed with John’s longstanding commitment to the beef industry, his proactive approach to minimising his beef businesses’ exposure to risk and market volatility, as well as his willingness to help other producers improve the resilience of their business businesses.

“The George’s were commended for their drive to futureproof the farm via a range of enterprises, for using learnings from one enterprise to inform another, as well as their commitment to high welfare standards.

“Jason’s enthusiasm and determination to find full-time employment in the agricultural sector, his collaboration with Linden Foods to help establish a new business enterprise, along with his efforts to secure the long-term success and viability of the family farm were all highlighted by the judges.”