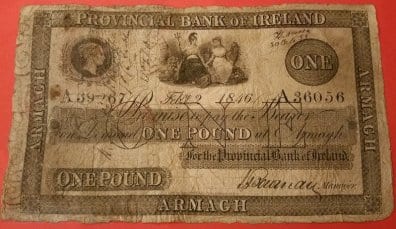 A pound note nearly 170 years old has been brought home by an Armagh businessman after he saw an article about the artefact on Armagh I.

Tommy McCague, spent a “substantial” sum of money on the rare bank note from the old Provincial Bank of Ireland, drawn from the Armagh branch.

The seller was seeking something in the region of €700, but Mr McCague was asked by the seller not to publicly divulge the agreed price.

“I knew nothing about it at all before Armagh I read the story, that’s what prompted me into action,” said the Armagh property developer.

“I was on the site one night and I thought to myself ‘what’s this about?’. I contacted the seller and asked him how much he would take for it and three or four emails later, back and forth, we ended up doing a deal for it. He sent it by post after that.”

This banknote was issued in 1846. It bears the name of the branch – ‘Armagh’ – and the signature of the manager. There were 33 branches formed around the country, north and south.

“I bought the note because I was keen to bring it home to where it belonged, back to Armagh,” said Mr McCague.

“I told him it was coming back to Armagh city to sit in my office and I’m more than willing to let anyone come in and see it.”

The note itself is a part of local history and the Armagh man’s grabbed at the chance to snap up this seldom-seen piece of our city’s proud banking history.

Mr McCague continued: “I was keen as I am a businessman with an office in the heart of the city on Irish Street.

“I said it’s unbelievable it’s out there 169 years and it would be nice to get it back. The front of it was in very good condition, the back not so much, but I was just glad to get it.

“I didn’t know the thing existed only Armagh I ran the article. I don’t even know how on earth you even found out about it.

“I did the research on it but still couldn’t find out half the information your website had on it. That’s what drew me to buy it.

“There’s so much history behind it. How often do you get a bit of history that is neither big nor bulky and is nearly two centuries old?”

Mr McCague is delighted that he turned to Armagh I.

“Some people can be sceptical of advertising and whether it works but there’s a prime example of it working,” added the thrilled businessman.

“I would never have even dreamt of looking at it, wouldn’t have been on the seller’s website only I was put in that direction.”

We for our part are delighted to have played our part!