Armagh groom Stephen told Armagh I : 'It was never the way I imagined getting married but I think it worked out better in the end' 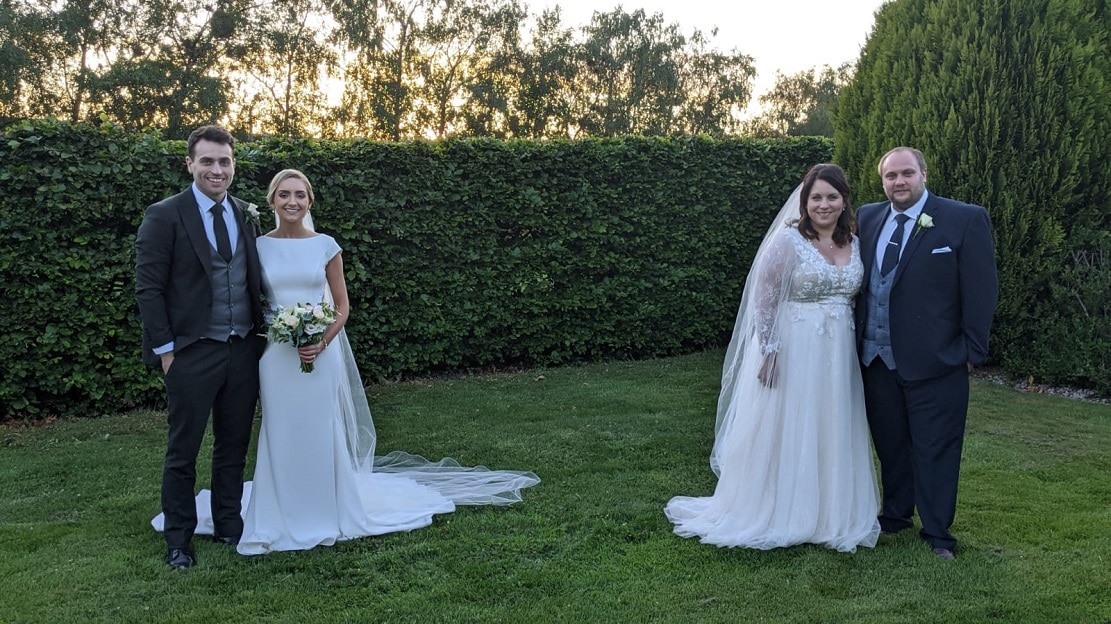 Many wedding celebrations have been put on hold due to the Covid-19 pandemic.

But two couples have not allowed this to put a dampener on their nuptials.

There were double celebrations on Monday with Magherafelt brother and sister, Michael and Helen Dawson, getting hitched to their respective partners on the same day.

Both sets of newlyweds had already set a date for their weddings, but made the decision to bring their plans forward due to the uncertainty caused by coronavirus.

The celebrations were made possible after the relaxation of lockdown rules which now allows for small ceremonies limited to 10 guests.

First to take the plunge was Helen, who married her Armagh fiance Stephen Shanks in her parents’ garden in Magherafelt.

Just hours later, Michael Dawson and Alison McLean said ‘I do’ in Maghera. Helen and Stephen made a quick whistle stop for photos in Maghera before continuing the celebrations in Armagh.

The ceremony included both sets of parents, Helen’s sister as bridesmaid, Stephen’s brother as best man and the pastor.

Other guests were able to join the ceremony remotely as a camera streamed footage online. Speaking to Armagh I, groom Stephen said: “It was never the way I imagined getting married but I think it worked out better in the end.

“The dress came the week before lockdown. They called us to pick it up before they shut up, but yeah we had everything ready to go.

“There was a lot of waiting about and hoping that it would be allowed to happen, so it was just great to be able to do it.”

The wedding took place in Helen’s parents’ garden in Magherafelt which was decorated for the occasion.

Stephen said: “They have a really nice garden, we had tea and buns before heading back down the road to Armagh for afternoon tea. It went really well – the sun even came out and then went down for photos, so it was perfect!

“We watched their wedding on Zoom then went to see them briefly for a photo of the four of us before heading onwards.”

Speaking of further celebrations to come, he said: “We would love to have a big celebration but at the moment that is just impossible to plan. We have no idea when that is going to be.

“Our reception has been put off to April next year, so we have that booked and will see what will happen.”

The honeymoon is off the table for the time being but Stephen says they are just looking forward to some peace and quiet.

“We both took two weeks off. There is a lot going through our heads plus we are going to be moving into the same house now too, so there is lots to do,” he added.

“We will just have to keep an eye on it for next year.”