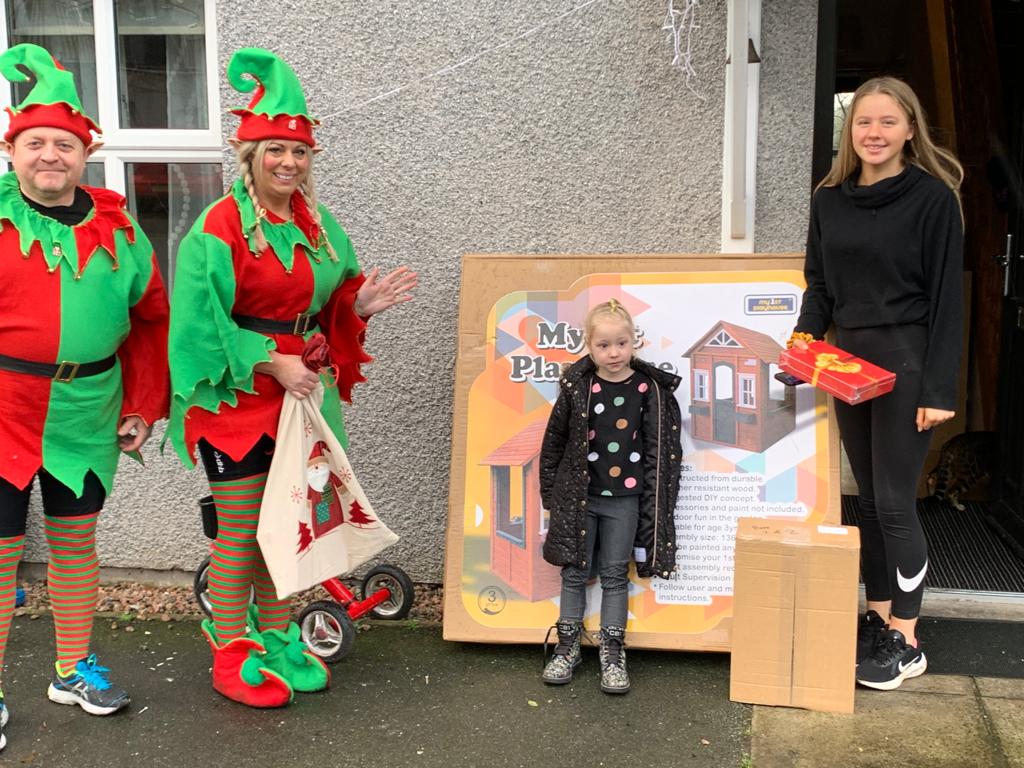 The charity, Northern Ireland Children to Lapland and Days to Remember Trust, was forced to cancel its annual flight to Lapland and instead has swapped air miles for garden visits.

The Northern Ireland Children to Lapland and Days to Remember Trust (NICLT), which takes 100 local children, with life threatening or life limiting conditions, to Lapland every year, has rolled out its new Covid-safe festive campaign, delivering gifts to 101 very special children across NI.

The NICLT was forced to cancel its yearly trip to Santa’s Grotto in Lapland in light of the pandemic and instead opted for a safer option, which saw it deliver gifts to the value of £200 to each of the children nominated by the various Hospital Trusts.

Siblings of those affected by illness and/or disability also received smaller gifts.

Ella Vaisvilaite (7) from Blackwatertown was one of those very special children. She was recently paid a visit by Santa’s helpers and elves from The Northern Ireland Children to Lapland Trust (NICTL).

Ella is pictured (main image) with her sister Neda with elves Lynda Mullan, Chair of the NICLT Carrickfergus Committee and her husband Stephen Mullan, NICTL volunteer.

The campaign, which the charity has called ‘Three Steps to Christmas’ began with a detailed and touching letter from Santa to the 101 children nominated. This was followed up by a video greeting, from the man himself, from his home in Lapland, with his head elf, Juju, by his side.

Now, at the final stage, these 101 children across NI have this week received gifts right to their doorsteps in time for Christmas.

The campaign was only made possible by the many supporters of NICLT, who donated funds and embarked on their own fundraising activities to raise money.

It was also made possible by NI telecoms firm, Barclay Communications, who made a magnificent donation of £20,000 last month, to pay for every gift purchased for the nominated children.

Britt Megahey, Founder and Managing Director of Barclay Communications, said: “We have always admired the work that the Northern Ireland Children to Lapland and Days to Remember Trust does and when we heard that they couldn’t fulfil their annual commitment of taking 100 vulnerable children to Lapland this year and how their efforts to raise the necessary funds had been met with many challenges, we wanted to do what we could to help. To see the campaign roll out across Northern Ireland is very heart-warming and we are honoured that as a business we were in a position to help those children who need it most.”

Speaking about the efforts to make the initiative happen, Colin Barkley, Chair of NICLT, said, “We are delighted to be able to kick start our campaign and, while we know that our Three Steps to Christmas might not equal a trip to Lapland, it will recreate some of that magic in the safest way possible.”

“We would like to thank those who continued to raise funds for us and donate during this challenging time and, of course, Barclay Communications for its huge generosity which has eased the weight and pressure felt by us at this time.”

The charity’s President, Gerry Kelly, added, “We receive no Government or Lottery funding and everything we do is entirely self-funded, relying on the generosity of individuals and companies across NI. We count ourselves very fortunate to have our fund-raising team in Carrickfergus and our Corporate Partners, The Bushmills Inn, Glens of Antrim Potatoes, C-Tec (NI) in Newry, Hagan Homes, Wineflair and, of course, Barclay Communications by our side.”

“Their ongoing support once again this year, allows us to start making ambitious plans for 2021, which, if circumstances allow, we hope will include taking an even larger group than originally anticipated to Disneyland in Paris as well as our annual trip to Lapland.”

Joining in on the distribution of the presents was former Ireland and British Lions Rugby star, Tommy Bowe, who said, “I have been aware for some time of the work of the Lapland Trust, but this was the first time that I had had the chance to see it for myself, up close and personal. What they do is absolutely fabulous and, as the father of two young children myself, it was really special to see the sheer joy on the children’s faces…and, boy, don’t they deserve those presents.”