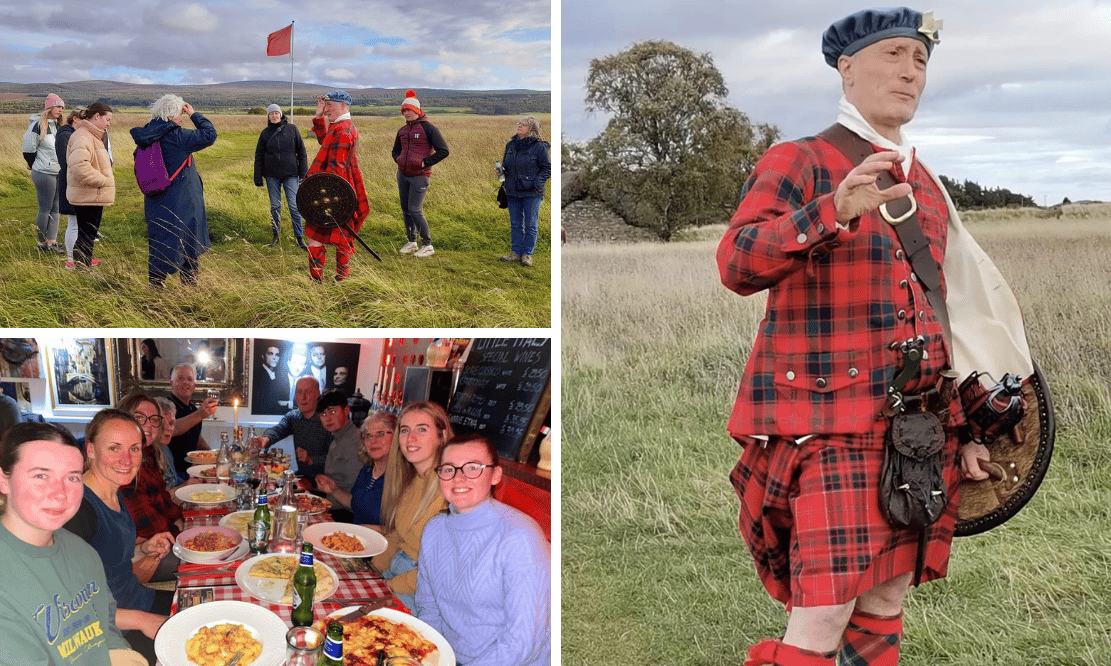 Perhaps not many people know that the Irish language as spoken in modern day Ulster (Gaeilge) derives from the same origins as the Scots Gaelic language (Gàidhlig) currently spoken in parts of Scotland.

CAIRDE Teo, the Irish Language Development Cooperative, based in Armagh City, has long been nurturing and developing linkages between the two regions via inter-cultural exchanges, conferences, study and field trips and practical networking with their fellow Gaels in Scotland. CAIRDE representatives have always been keen to emphasise the strong indigenous links between the two Gaelic cultures, separated by Sruth na Maoile – the narrow strip of water between Ireland and Scotland.

In furtherance of these endeavours, CAIRDE has been supported by Iontaobhas Colmcille, a partnership between Foras na Gaeilge in Ireland and Bòrd na Gàidhlig in Scotland: Iontaobhas Colmcille fosters communication and collaboration between the Scottish Gaelic and Irish Gaelic language communities.

In the latest cultural exchange programme, representatives from CAIRDE Teo and Cultúrlann Aonach Mhacha recently visited Inbhir Nis (Eng: Inverness), meaning “Mouth of the River Ness”. Inverness is a city in the Scottish Highlands. It is the administrative centre for The Highland Council and is regarded as the capital of the Highlands. The city lies near two important battle sites: the 11th-century battle of Blàr nam Fèinne against Norway which took place on the Aird, and the 18th century Battle of Cùil Lodair (Eng: Culloden) which took place on Culloden Moor. CAIRDE Teo youth representative Tomás Mac Eadbhaird outlined the details of the trip: “Our three-day trip to the Scottish Highlands was highly eventful and we packed in a lot of cultural activities, discussions, meetings and excursions.

“We’d like to extend our thanks to the wonderful team in Inverness who are currently endeavouring to build their own Cultarlann (Eng: Cultural Centre) in the highland city. A full itinerary was arranged by our excellent hosts Mairéad and Anndra Fearghasdan that included walks, Gàidhlig classes, meetings, music, guided tours and presentations.

“Local teacher, writer and historian Ruaraidh MacIlleathain guided us along the Inverness River and canal on Friday afternoon and regaled our group with entertaining stories from local folklore. Ruairidh interweaved the folk tales with examples of the shared heritage between the Gaels of Scotland and Ireland including connections with Colmcille, Cú Chulainn, Fionn Mac Cuthmhaoil and many other legendary figures.

“The walk was followed in the evening by a beautiful meal with our hosts during which six Irish language activists from Armagh shared their experiences and stories with their cultural counterparts from Inverness”. Tomás continued: “An early start on Saturday morning brought the Armagh Gaels to the picturesque conference suite of the Palace Hotel on the banks of the River Ness where they had a morning of instruction on conversational Scots Gàidhlig with language instructor, singer and cultural activist Susanne Mac Donald.

“After lunch, we had an epic guided tour of the Culloden Battlefield, where the Jacobite rising of 1745–46 was defeated by the British Goverment. Anndra Fearghasdan brought the full history of the battle to life, dressed in full Highland regalia from the mid C18th.

“Later that evening, Aonach Mhacha founder Gearóid Ó Machail and his colleagues, Cáit Ní Choirbhín, Shannon Ní Chléirigh and Níamh Ní Móra delivered presentations on their work and activism to promote the Irish language in Cultúrlann Aonach Mhacha, at the invitation of the local committee from Cultarlann Inbhir Nis.

“The presentations were followed by performances from local musicians and singers Calum Ailig Mac a’ Mhaoilein, Coll Dòmhnallach, Saffron Hanvidge and our very own Luíseach Ní Thréinfhir from Armagh City. “On our final day, we visited sites of historical and cultural interest around Inverness, including the famous Clava Cairns, a well-preserved Bronze Age cemetery complex of passage graves; ring cairns, kerb cairns and standing stones in a beautiful setting. A hugely significant and exceptionally well-preserved prehistoric site, Clava Cairns is a fantastic example of the distant history of Highland Scotland, dating back about 4,000 years”.

Speaking on behalf of the Cultarlann Inbhir Nis group, Mairéad Fearghasdan said: “What a fantastic weekend we had listening to presentations from everyone who came across from Aonach Mhacha in Ireland. We heard about the work they undertook to open a Cultúrlann and what they do there now – a huge amount! Classes, cèilidhs, a shop, a café, summer camps and more!

“We are so thankful to them for the presentations and the encouraging words. They have given us confidence in our campaign to build a Cultarlann in Inbhir Nis!” Mairéad was very enthused and energised by the new partnership between Armagh and Inverness and finished with the words: “A small spark has often kindled a great fire.”

The cultural exchange trip ended with an invitation to the Inverness group to return to Armagh and visit the fabulous Cultúrlann facility in the Shambles area of the City, that has already become a hot bed of musical performances, dancing, exhibitions, launches, conferences and classes.

CAIRDE Teo has asked us to thank their hosts in Inverness for their incredible hospitality and support and also Iontaobhas Colmcille for their sponsorship of this vital cultural partnership between the two Cultúrlann groups in Scotland and Ireland.