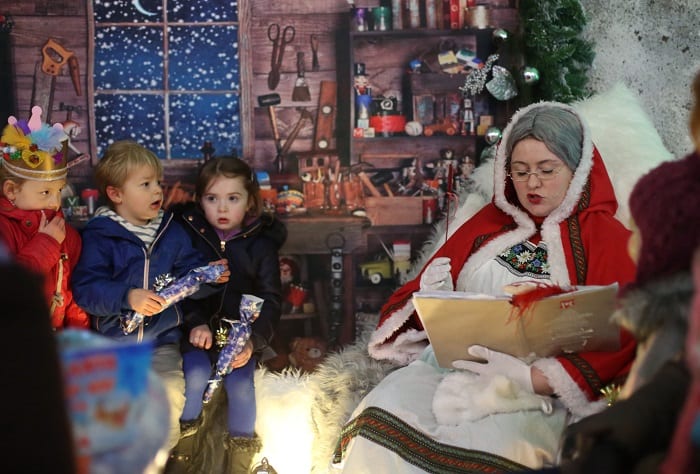 With the most extensive programme ever assembled in its 13-year history, Armagh City, Banbridge and Craigavon Borough Council, said visitors had flocked from across the borough and across the island to attend the heritage-themed festivities.

The now two-day festival, which has welcomed over a quarter of a million visitors since it was established in 2004, kicked off on Friday with an exquisite Georgian Banquet at the Archbishop’s Palace, extending the traditional event by one extra day.

Hosting a range of traditional and new experiences to celebrate the Cathedral City’s iconic Georgian history, heritage and architectural beauty, the event featured fairground games and rides, real reindeer, light sculptures, fire performances, workshops and crafts throughout the city streets and at the Children’s Christmas Market, hosted in the famed Shambles Yard.

A traditional market supported by a record 100 stallholders, lectures and tours entranced the record-breaking crowd during an atmospheric day that culminated in a unique and spectacular light show performance.

In a splendidly-orchestrated event which transformed the city into a Christmas wonderland, Georgian lords and ladies strolled the cobbled streets and stallholders served customers artisan foods, drink and produce in traditional Georgian outfits against a backdrop of Christmas music and entertainment from local singers.

Lord Mayor of Armagh, Banbridge and Craigavon, Garath Keating, said the event had been an outstanding showcase success for the city, the borough and Northern Ireland.

“This magical event stops the clock for a day for everyone to immerse themselves in the enchanting atmosphere of times gone by with a unique and exceptional programme of family-friendly events, entertainment, food, drink and festive activity.

“For the city of Armagh and for the entire borough, we’re delighted that this special event has grown in stature and success year-after-year and that the support for this well-established event continues to grow.”

A signature event, Georgian Day is just one part of a packed programme of events scheduled for the Armagh City, Banbridge and Craigavon Borough Council area this year.

Earlier this month, the council launched an impressive new ‘Our Story of Christmas’ programme of unrivalled events, activities and thrilling things to do for this year’s festive season.

Bursting with magical experiences, lights, music, street entertainment, food, shopping and much, much more, the programme includes events such as Jenny Bristow’s Christmas at Banbridge Old Town Hall, a Cinderella Panto Spectacular at The Market Place Theatre, a live nativity at Tannaghmore Gardens, the mystery of the Christmas Star at Armagh Planetarium, twilight markets, craft workshops and seasonal music.

To find out what is on near you, and to download the full programme, visit www.ourstoryofchristmas.com