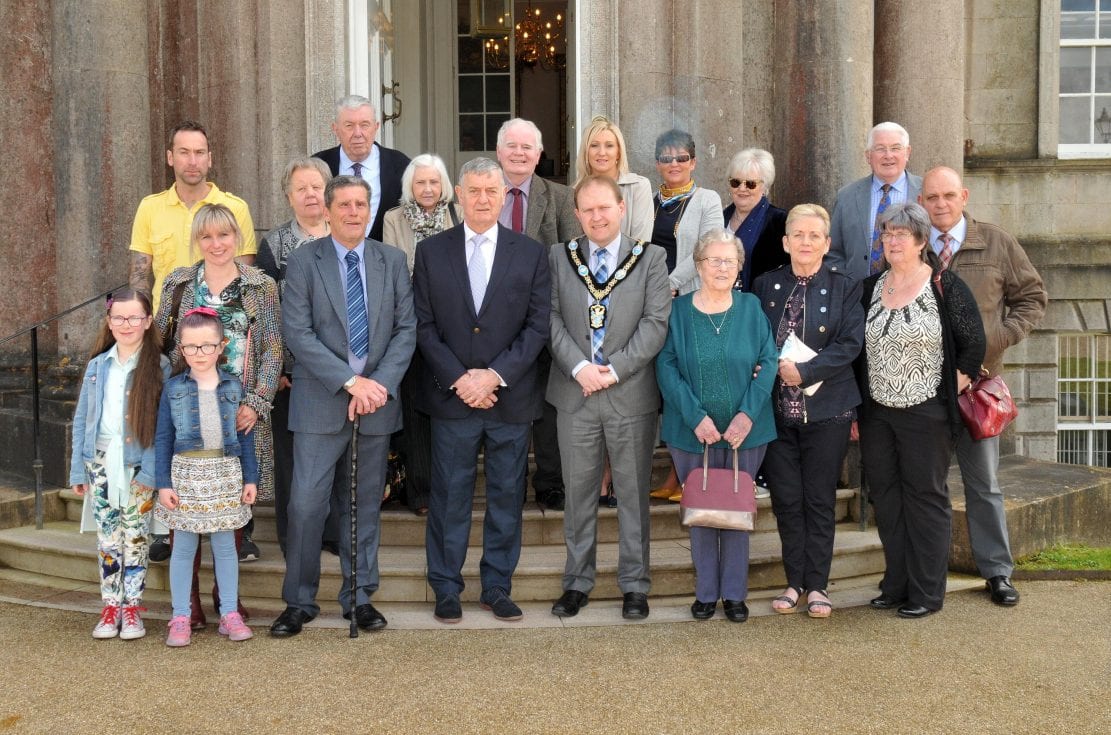 Lord Mayor Gareth Wilson hosts the Wounded Police and Families Association at the Palace in Armagh.

The wife of a police officer who lost both legs in a booby-trap bomb blast has been recalling the tears and trauma during a visit to Armagh.

Ronnie Pollock was seriously injured in the explosion outside his home at Banbridge in November 1981.

His wife, Georgina, has spoken of the moments after the IRA bomb exploded under his car and what the family had to go through in the months and years ahead.

She did so during an event in Armagh, as Lord Mayor Gareth Wilson has hosted the Wounded Police and Families Association at the Palace in Armagh to mark their 10th anniversary.

The organisation provides healing and help for those who served in the RUC, in either a full or part time capacity, or the PSNI, and sustained physical injuries or suffered mental trauma on duty.

“I was delighted to be able to host the association to mark their 10th Anniversary and I was presented with a special book ‘Shared Memories’ and a special vase embossed with the RUC, PSNI and WPFA emblems,” said the Lord Mayor.

“I felt it was especially important to take time and speak with the former officers, and their families to hear of their harrowing experiences during the troubles. It was certainly an afternoon of mixed emotions.”

The Lord Mayor recounted his conversation with Georgina, whose husband Ronald also sustained a broken arm in the devastating attack.

“Ronald left the house whistling a hymn, then I heard the bang – I ran out and he had been blown out of the car and across the road. He had dirt in his eyes and his legs were gone. But he was alive – I just said don’t you die on me and he said he wouldn’t.

“He knew I loved watching aeroplanes and one was passing across the sky and he said there’s an aeroplane – he was just so calm. All I told him was your feet are away, you lost your feet, I couldn’t tell him he had lost his whole legs.”

Alderman Wilson said that Georgina relayed to him that her husband, now 89, spent months in hospital and it was sobering to learn of the impact this under car bomb planted by the IRA had on the whole family.

The Lord Mayor continued: “This attack left a wife having to struggle for years to manage caring for her husband; her son ran out of the house and witnessed this horrific scene and the only reason Ronald wasn’t dead was because he had heard the click of the tilt switch – he knew what was coming – and managed to get the car door open.

“The bomb blew the door off the car and it badly damaged his arm as he was still holding the door open. Kids in the street saw the carnage, neighbours saw the carnage. Georgina asked a neighbour, ‘Can you wash the blood off the road as I don’t want to come home and see that’ as she went off in the ambulance which had taken 30 minutes to arrive.

“A nurse used policemen’s ties as tourniquets to stem the blood loss.”

The Lord Mayor paid tribute to Georgina, her injured husband and family and also to the work the WPFA carry out.

“We owe a massive debt of gratitude to our policemen and policewomen who protected everyone through such dark and deadly times and their stories must not be forgotten,” he added.