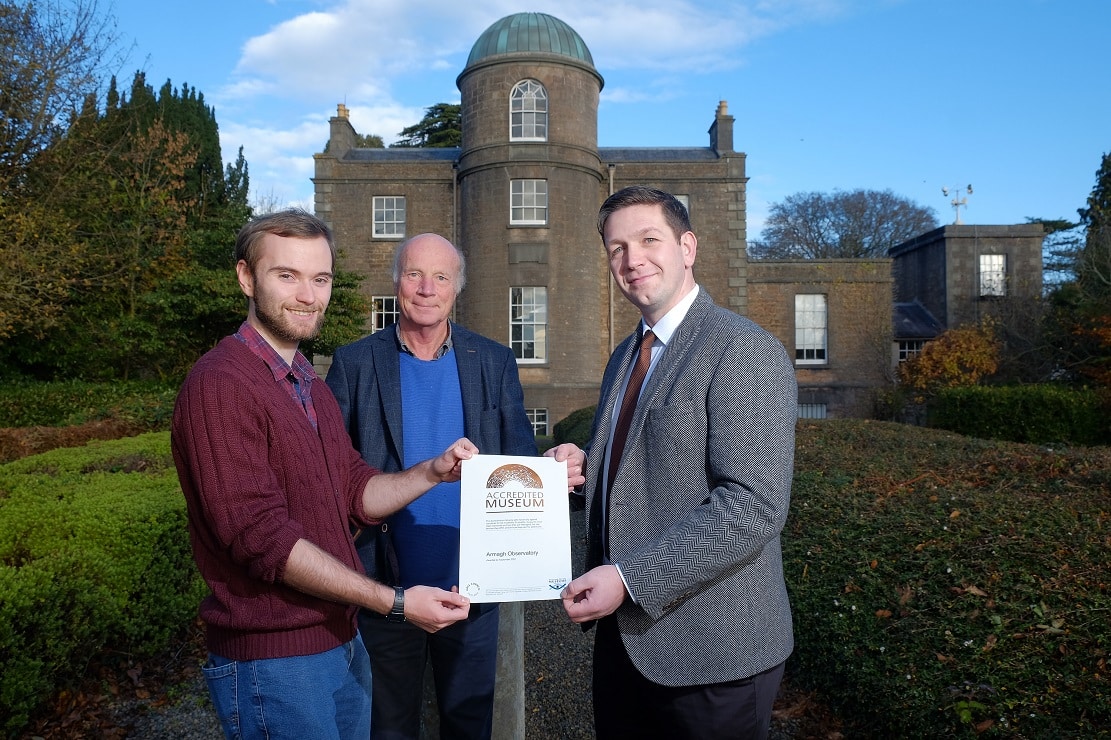 Armagh Observatory has today announced that it has received accreditation from the NI Museums Council under the UK Museum Accreditation Scheme.

The Observatory now joins a much larger community, both locally in Armagh and beyond. Armagh is home to five accredited museums, all of which work together and share ideas.

Originally established by a 1791 Act of Parliament as both an observatory and a museum, Armagh Observatory holds a historic collection of over 31,000 objects, the preservation of which is essential both to its own heritage and to enriching the knowledge of the community.

The UK Museum Accreditation scheme is jointly administered throughout the UK by a partnership of oversight bodies, including Arts Council England, Museums, Archives and Libraries Division in Wales, Museums Galleries Scotland, and the Northern Ireland Museums Council.

During the three-year application process, Armagh Observatory and Planetarium evaluated its procedures, attitudes and policies, helped its employees to upskill and recruited staff with prior training in the sector.

Matthew McMahon, Museum Collections Officer at Armagh Observatory and Planetarium, said: ”We’re delighted to be recognised by the UK Museum Accreditation Scheme and would like to thank the NI Museums Council for the accolade.

“Armagh Observatory was established to function as a museum, as well as an observatory, and has, historically, been a place where people come to learn about the world around them, and to make sense of their own history and natural environment.

“The groundwork that made Museum Accreditation possible began decades ago and the process of achieving accreditation has taken over three years. Essentially a community effort, this has been supported by both current and former staff, all of whom recognise that our heritage is a huge strength, and the support from our neighbours in Armagh has been essential.”

Museum Accreditation is a process carried out globally to ensure that museums remain trusted and sustainable institutions. It is also intended to ensure that they continue to inspire, educate and protect heritage, culture and stories. The process provides museums with guidance in the rigorous implementation of best practise.

Dr Jonathon Dalzell, Director at the NI Museums Council, added: “It is a pleasure to award UK Museum Accreditation to Armagh Observatory.

“At the Northern Ireland Museum Council, we advocate for museums at a governmental level, providing a voice and reminding people of the role that museums can play in communities and nationally. Museums have the potential to make a powerful impact on our lives. They educate, stimulate, and entertain us, and Armagh Observatory is a worthy recipient of this accreditation.

“As the oldest scientific institution in Northern Ireland and the longest continuously operating astronomical research Institute in the United Kingdom and Ireland, the Observatory is a hugely significant repository of artifacts of historical and scientific importance.”