Paul hopes to raise £3,500 for NI Chest, Heart and Stroke and Macmillan Cancer Support in memory of John, who passed away in 2017 after a brave battle with cancer 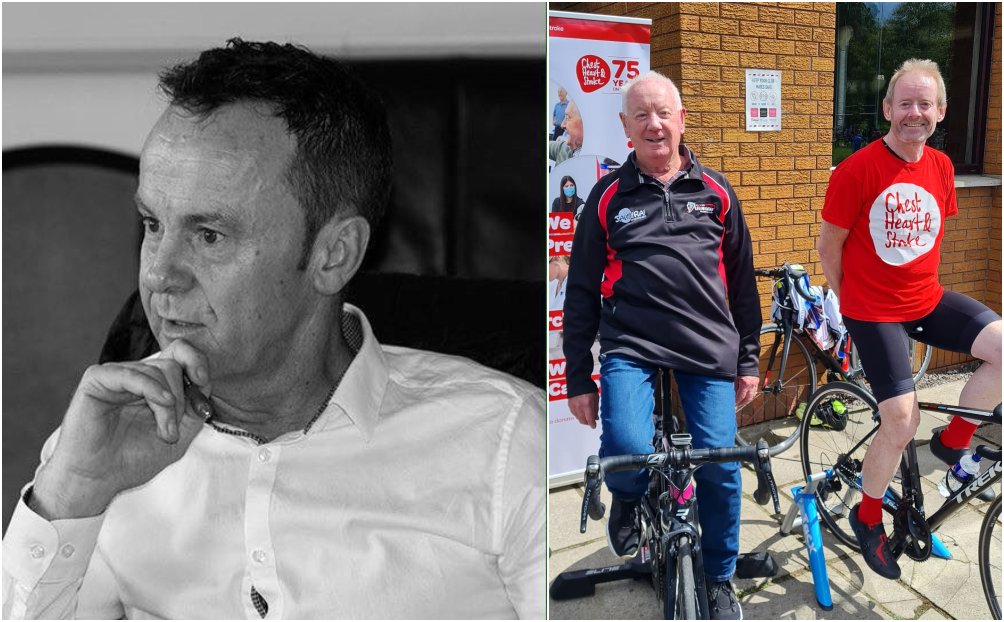 An Armagh man is busy racking up the miles in preparation for a triple crown cycling challenge this summer in memory of friends who sadly lost their lives due to a heart attack or cancer.

And Paul McCord is aiming to raise at least £3,500 for Northern Ireland Chest Heart & Stroke (NICHS) and Macmillan Cancer Support.

Paul explains: “In 2015, my friend John McNally, completed a hugely successful cycling fundraising trip to Lake Garda with two of his closest friends, The Italian Job 1.

“The following year John organised a repeat fundraising trip even though he was battling cancer.

“Unfortunately, John was unable to make The Italian Job 2 trip due to his illness, but his determination once again resulted in much needed funds being raised for the chosen charities.

“John sadly lost his battle with cancer in 2017. Since The Italian Job 1, two friends, Brian Calvert and Shane McArdle who both took part in the challenges, have sadly lost their lives to heart related illness.

“This September, John’s sister, Tracy Whiteside, is continuing the fundraising tradition. In memory of John, Brian and Shane, Tracy and myself, along with a group of other friends will be taking on The Italian Job 3 in Lake Garda. We will be cycling 500 miles over one week and featuring at least two climbs from the Giro d’Italia.”

Not content with solely taking on this gruelling event, Paul decided he wanted to make his own personal fundraising challenge even bigger. Paul added: “In the past I have cycled in France and in Australia to raise money for charity so I’m always looking out for more extreme things to do. Unfortunately, the pandemic delayed the opportunity to do anything like this, so I have decided to come back with a bang this year.

“In addition to The Italian Job 3 I will be taking on two other cycling challenges, thereby composing my own triple crown.

“On June 18th I will be taking on the Chase the Sun challenge in Italy, starting at Cesenatico on the Adriatic coast at dawn and ending in Tirrenia on the Mediterranean Sea. This will incorporate cycling 186 miles and taking on 10,000 feet of climbing in one day.

“At the end of July, I will embark on my Alpine Climbs challenge when I will cycle from Geneva to Nice over seven days. This involves a distance of around 500 miles, climbing almost 50,000 feet in total, over fifteen mountains used in the Tour de France including the highest road pass in Europe, Le Col de la Bonette. Then in September I’ll back in the saddle for The Italian Job 3!”

Some people might think a cycling trip to Lake Garda sounds delightful but Paul stresses this will be no holiday.

He said: “Cycling is hard both physically and mentally and these challenges will push me, and the others taking part in The Italian Job 3, well outside our cycling comfort zones.

“We are a group of social cyclists of varying abilities and ages. Italy is not flat, especially around the Lake Garda area. To achieve the goal of 500 miles in a week will require significant effort and support from everyone in the group. People shouldn’t underestimate how big a challenge this is, but it is nothing compared to what the people who benefit from NICHS’s services face every day and that thought will be a huge motivator when things get tough.”

Impressively, Paul has already raised over £2,370 of his £3,500 goal and he is hoping his story will inspire others to support his efforts and donate to help raise as much money as possible for the causes close to his heart.

Pauls explained: “£3,500 is my own personal target but as part of the wider Italian Job 3 challenge our group is aiming to raise at least £30,000.

“As well as training for the cycling challenges we have been busy with other fundraising activities including static spins at a local supermarket and my local rugby club, Armagh Rugby Club.

“This involves cycling statically for over six hours so it’s no mean feat although I think the leg waxing fundraiser might have been worse! More static spins are planned for the coming weeks and I’m also going to be running a fundraising quiz in late summer.

“I am determined to put all my efforts into raising as much money as possible to help NICHS continue their vital work.”

Jackie Trainor, Director of Income Generation at NICHS, said: “We are very thankful to Paul for taking on this challenge in support of our charity. The effort and dedication shown by Paul is nothing short of phenomenal and we wish him all the best as he prepares to take on this triple crown challenge.

“Today, there are over 335,000 people living with a chest, heart or stroke condition in Northern Ireland – that’s one in five of the population. Nearly 90% of NICHS’s care and prevention services and research projects are funded exclusively by donations so fundraising efforts like Paul and The Italian Job 3 team’s are vital for our charity and what we can achieve.

“The money raised by our supporters enables us to continue to help the local community and provide life-changing services for people living with chest, heart and stroke conditions and their families.”

If you would like to find out more about Paul’s triple crown challenge, or to donate, visit https://www.gofundme.com/f/pauls-triple-crown

If you have been inspired by Paul’s story you can find out more about the many different ways to support NICHS at www.nichs.org.uk/how-you-can-help