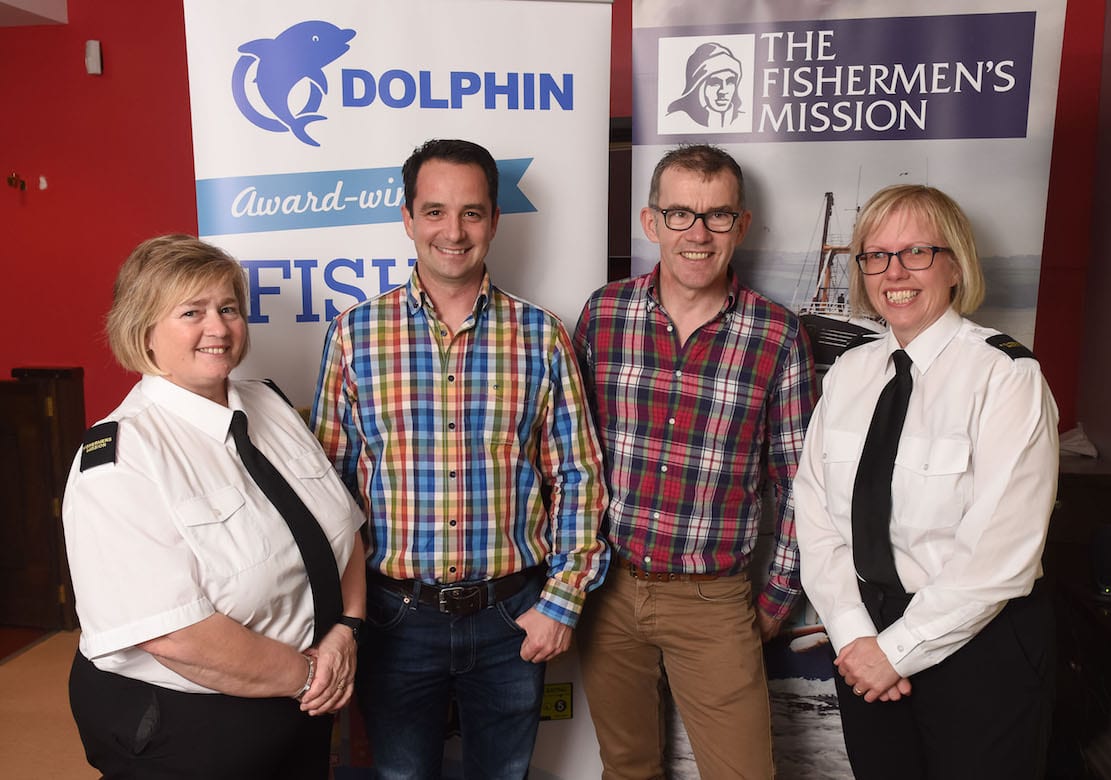 Owner, Malachy Mallon from Armagh, presented the impressive cheque to the charity at a special event organised by South West College, Dungannon earlier this month.

The celebration was attended by noted guests from across Northern Ireland, including the Chair of Mid Ulster Council, Seafish UK, the organisers of Seafood Week and the National Fish Friers Federation.

Malachy raised most of the money by completing a solo cycle to the UK Top 10 Fish & Chip Shops during the summer, aptly named ‘Mal On A Mission’.

The passionate, 50-year-old chippy owner pedalled for 1500 miles, over nineteen consecutive days, across Northern Ireland, Scotland, England and Wales, in all weathers and terrains.

The Dolphin wrapped up fundraising efforts with the help of students and staff at South West College by holding a tasty ‘Fish & Chips for Charity’ event to mark October’s Seafood Week.

Speaking at the recent cheque presentation, Malachy Mallon underlined the importance of the Fishermen’s Mission’s work, saying: “Fishing remains the most dangerous peacetime occupation in the UK and this amazing charity depends totally on donations; they don’t receive any government funding or lottery money, so it’s really important to help these guys continue the crucial work of supporting our brave UK Fishermen.”

Supt. Lesley Hammond from the Fishermen’s Mission, Kilkeel was emotional as she received the cheque on behalf of the charity.

“We are absolutely delighted and so thankful to Malachy for his amazing support, this amount of money will help us make a life-changing difference to fishing communities.

“The Fishermen’s Mission is the only fishermen’s charity that provides emergency support alongside practical, financial, spiritual and emotional care, helping all fishermen, active or retired, and their families.

“Fundraising helps the Fishermen’s Mission carry out our vital work in NI and across the UK. We are a lesser-known charity but Malachy has done so much work this year to help raise awareness of our very worthy cause.”

Mr Mallon added: “I’m grateful to everyone who supported me throughout my mission and I’d particularly like to thank my cycle sponsors, McWhinney’s Sausages and secondary sponsors, Stephens Catering Equipment and Duncrue Food Processors.

“Not forgetting the Fishermen’s Mission who have been a fantastic help throughout, in particular Supt. Susan Brown (Scotland) who was my wing-woman, mentor and van driver.

“Last but not least, a big thanks to the catering staff and students at South West College, Dungannon who worked so hard to host our recent charity evenings as well as cooking fabulous seafood dishes for our guests.”

Houses on two new Armagh developments sell within hours – before a brick is laid! – https://t.co/epL7uRG9Jg pic.twitter.com/nMw3ngU65T

Grainne Mulholland, Catering Curriculum Manager at South West College said: “We were proud to host and support the Dolphin’s Seafood Week events and we commend Malachy for his fantastic fundraising efforts.

“We look forward to continuing our valuable partnership with Malachy Mallon who has volunteered his specialist frying skills and award-winning knowledge to us on many occasions over the past three years.”

The multi award-winning Dolphin is the current holder of the NI Regional Winner’s title in the Seafish National Fish & Chip Awards, a title the Dungannon chippy has held for the past three consecutive years.

As one of the UK Top 10 shops, the Dungannon chippy will compete in January for the ultimate crown – UK Fish & Chip Shop of the Year 2018.

The Dolphin has also been announced as one of the UK Top 3 shortlisted for the Healthy Eating Fish & Chips Award.

Dr Lynn Gilmore from Seafish, who attended the Dolphin’s charity event, said: “Congratulations to Malachy, what a passionate ambassador he is for the chippy industry and what an apt way to celebrate Seafood Week, which is about enjoying local seafood and thanking the people who produce it, from the fishermen who haul their fresh catch in all weathers to the chefs who serve it to our table.

“We wish him all the best for the forthcoming National Fish & Chip Awards final in London.”