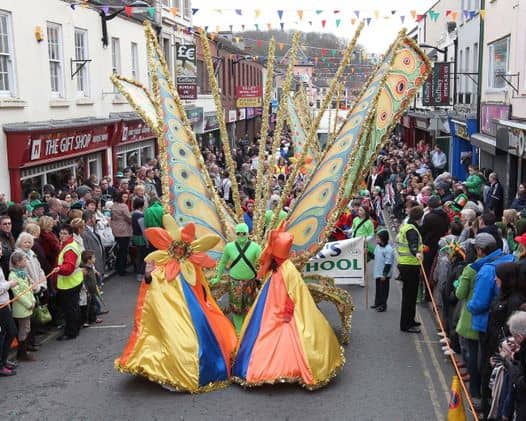 We may not even have reached Christmas but already planning is well underway for next year’s St Patrick’s Festival – a true cracker promising to be bigger and better than ever.

The celebrations in Armagh this year will stretch over a full 10 days – with diverse activities for all ages to enjoy.

The planning has been going on behind closed doors at Armagh City, Banbridge and Craigavon Borough Council.

But by the looks of some of the events lined up we are in for a treat! Even both cathedrals in Armagh bearing St Patrick’s name are to be illuminated for the cross-community, multi-cultural celebration.

The annual carnival procession drew huge crowds this year and 2015 will be no different.

It will make its way through the city centre, leaving at 1pm, on Thursday, March 17, a spectacular display of colour, music, dance and entertainment for all to enjoy.

And a free open air concert will run in the city centre during the day, from noon until 4pm, headlined by the fantastic ‘The Nooks’, with other bands also lined up. The music will only stop for as long as it takes for the parade to pass by!

And there will be a family fun day taking place between 1.30pm and 4pm on the same day at the Shambles Yard.

In the Synod Hall, a special Tea Party will be held to celebrate St Patrick, which includes a feast of Irish traditional music and song.

At the Navan Centre that evening, there will be a unique, fun and interactive theatre experience to celebrate St Patrick and his links with Navan. The event will finish with the lighting of a beacon on the mound.

St Patrick’s Day hangovers can be left behind when we can enjoy it all over again on the Friday – with live music again planned on the bandstand in the city centre!

Father Ted star Ardal O’Hanlon will be appearing in the Market Place Theatre that night too!

Moya Brennan and The Nualas will be in the Market Place – separate shows – on the Saturday, while the world-famous Ulster Orchestra will be performing at St Patrick’s Church of Ireland Cathedral.

The first ‘diaried’ event is on Thursday and Friday, March 10 and 11, is the Féile Scoil Dramíochta at the Market Place Theatre – the finals of the Ulster Schools Drama Festival for plays in the Irish language. Winners from various festivals will travel to Armagh to perform around 20 plays and musicals during the course of the competition.

On the afternoon of Sunday, March 15, Armagh Pipers Club will host their annual concert in the Market Place Theatre. This much-anticipated concert will feature almost 300 musicians, including all of the club’s musicians and tutors.

This annual concert will be extra special in the Piper’s Club 50th anniversary year.

On Monday and Tuesday, March 14 and 15, a two day festival of Irish language competition will take place at the Market Place Theatre, organised by Gael Linn.

On Tuesday, March 15, a Family History Fair at the Armagh City Library will give people the chance to trace their family back through the generations with the help of some local artists.

Wednesday, March 16, will see the Archbishops Lecture in the Market Place. There will be an opening address by the primates of the two main churches in Ireland – Archbishop Richard Clarke and Archbishop Eamon Martin, who will be speaking on a theme from St Patrick’s Confession.

Between Wednesday, March 16 and Sunday, March 20, there will be session trails across the city, featuring traditional music, family friendly sessions and other live music.

Those in a Shamrock Supper, walks and a circus performance for the children at the theatre – and much, much, more – and they’ll be flocking to Armagh next March.

All events take place between March 11 and 20.