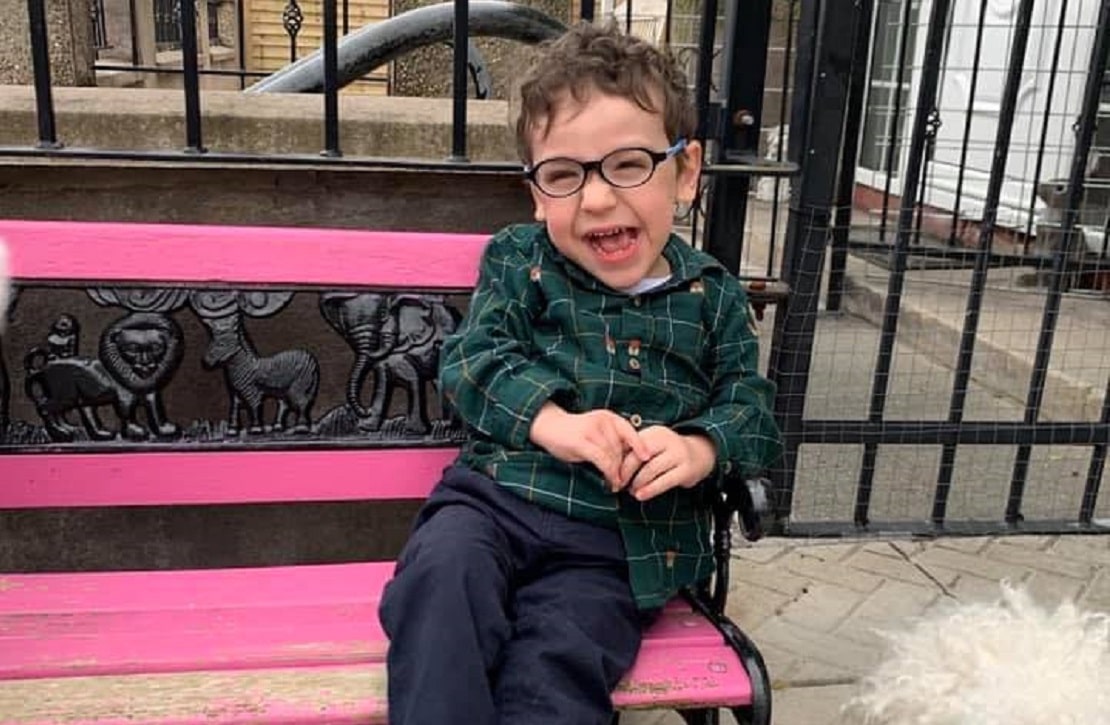 An Armagh family are fundraising in order to help a boy who suffers from quadriplegic cerebral palsy reach his full potential through treatments and therapy.

Ballymacnab woman, Seanin Traynor, describes her son Oisín as the “most sociable boy” with the “most infectious smile”.

Oisín was born at 25 weeks on May 27, 2018, weighing 950 grams, in London, after Seanin developed sepsis and was rushed for an emergency C-section.

Speaking to Armagh I, she recalled: “At the start there were no massive issues, for a 25-weeker. Obviously he was in intensive care but they tried to take him off when he was three days old and he managed 12 hours off.”

On June 12, a long line which went into the tip of the new-born’s heart delivering treatment displaced into his abdomen.

Seanin said: “All the medication that has gone through that line wasn’t going where it should have so it was leaking into his abdomen.

“This put pressure on his body, which made his blood pressure drop and his oxygen levels drop. This went unnoticed for a period of time.”

Then came the news from the doctors that there was nothing else that could be done.

Seanin stated: “We were told to say our goodbyes. We got him christened. We didn’t tell them at home, we just said things weren’t good.

“My mummy and daddy, and Mark’s mummy landed over within a couple of hours. My mum had only left the night before.”

That night Oisín’s condition continued to deteriorate but a surgeon did discover, whilst trying to release pressure from his abdomen, that the line had dislodged.

“Once they drained that, things started improving. His blood pressure went up and he never needed anywhere near as many chest drains,” said Seanin.

But the ordeal was not over, as two weeks later, during a routine brain scan, doctors discovered a cyst had begun to develop.

Seanin said: “We were told there was nothing to worry about and not to Google, the usual sort of ‘just wait and see what happens’.

“Then he would have had a regular scan two to three times a week. Four weeks after that, we were told that things didn’t look good, it was a pretty bad prognosis and it was unlikely that we would take him home.”

Seanin and Mark were told that cerebral palsy was a possibility but no MRI could take place until Oisín had reached his due date and wasn’t on assisted breathing.

“That was done at the end of October, first week of November…we were told by one doctor that the MRI looks bad, but Oisín looks good. He can lift his head, he responded to his name, we were just told to hope for the best.”

Although he has not been diagnosed with quadriplegic cerebral palsy, Seanin says that doctors want to see how Oisín develops in order to ascertain which type of the condition he has.

She commented: “We had six miscarriages before him, so I suppose a miracle isn’t the word, but it was hard to get him and we had an ectopic pregnancy after him.

“Then we’ve got another little girl; she is six months old. We went through a lot to get him here so he can never do wrong.”

Seanin added: “You never see him not smiling and he does have the most infectious smile.”

The family moved back home to Ballymacnab in November 2019 in order to be closer to family.

Seanin said: “We knew we were giving up the medical services but it was family support, and for him to grow up we had come home.

“We weren’t allowed to travel home with him until he was 10 months old, so a lot of family hadn’t seen him because they limit the people allowed into the neonatal unit.”

This proved to be a great decision. Seanin says that Oisín flourished with family around him and the examples set by his cousins.

She added: “He’s the most sociable boy, he will laugh at you, he’s obviously been locked up and he’s not as happy as he was, but you don’t see him without a smile on his face.

“He loves going on walks with granda and he will shout at people. He just loves the attention.”

Seanin sought out the help of Just4Children, to help fundraise to provide Oisín with the specialist equipment and therapies he needs to help him reach his full potential.

She explained: “They set up the JustGiving page to run until 2025 to start with. They pay for all the fees associated and then they hold on to the money.

“Then, basically, as he needs equipment, we would contact the companies that you would get the equipment off and get the invoices, then it just all goes through them.”

She added: “We were told to set this up when he was born but we just held back on it. Then we came home in November, he was back in London for surgery in January and then it was Covid.

“You don’t know what people’s income is, and then it just got to the point we just thought it’s going to be long term but we will just start slow.”

Seanin explained that many of the specialist treatments are not available in Northern Ireland, only adding to possible costs.

“When you’re going to England, you’re doing maybe six sessions in the space of a week, or sometimes 12 if you get two a day,” she said.

“Then you have flights and accommodation, so you are looking at around £1,500 or more every time you visit.”

However, one invaluable service, which Seanin found not too far from home, is the Buddy Bear school in Dungannon, and she championed their work.

She stated: “Oisín’s cerebral palsy will never get any worse, but the effects could worsen over time, so he may get tightness in his muscles or he may get more pain.

“The more that you can work and develop on his muscles and strengthen them and keep the range of movements the less likely those are to worsen.”

Seanin has welcomed any fundraising ideas from those who would like to do their bit to help out.

To keep up with Oisín you check out his Facebook page or to donate visit the JustGiving page.