Armagh city centre street to be transformed as six more properties to get major make-over!

Hundreds of thousands of pounds has been pledged to spruce up the facades and transform the outward appearance of some historic buildings which have, alas, all seen better days! 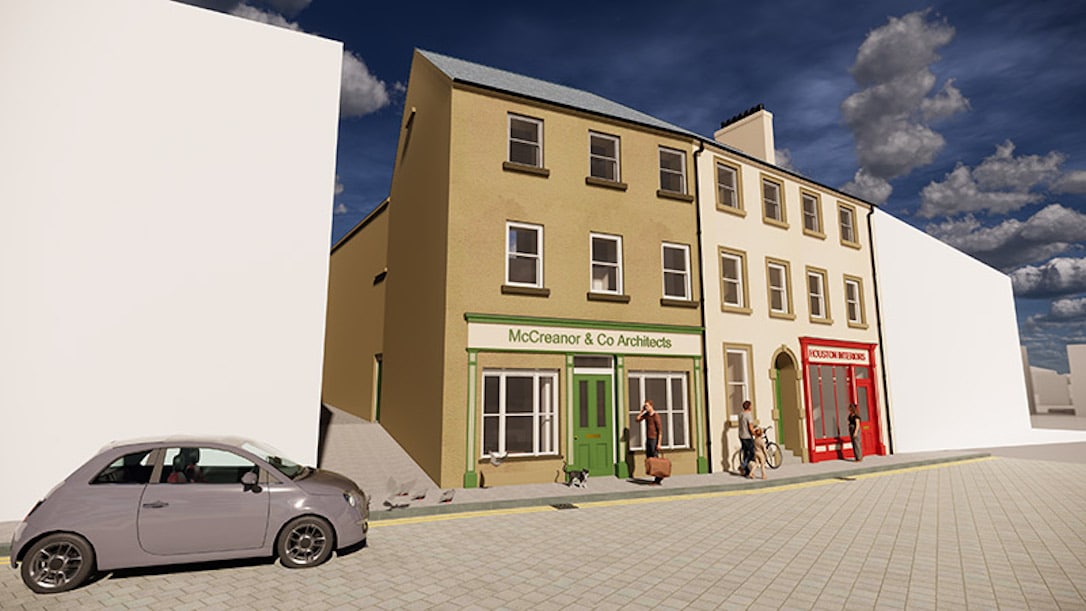 For six more of the city centre’s key properties – including the former Dunnes Stores – are to be given a fab facelift with hundreds of thousands of pounds pledged to get the job done.

The Department for Communities this week offered Armagh City, Banbridge and Craigavon Borough Council the tidy sum of £360,000 towards the cost of the works.

Certainly not to be sniffed at and, with match funds already available under the much-heralded Townscape Heritage initiative, the cash is now in the kitty to see the ambitious project through.

The works will involve the outward facades of the buildings, and all will be transformed, giving what are now chiefly drab, dreary and dull stone walls and windows on the outside a much-improved, yet traditional-style, new look.

The six properties in question are all to be found along one side of Upper English Street.

They include the old Dunnes Stores building, for which there are plans by a private developer to refurbish and construct apartments with retail at ground floor.

Also getting a new outward make-over is the old Cake Shop and former RJ Johnston’s shoe shop, which is now home to Hairport Turkish Barbers.

The substantial neighbouring property, which actually covers two numbered addresses and was previously home to Wrights Soft Furnishings many moons ago, is also to benefit from works to its facade.

These latest works will follow on from four previous buildings treated to the make-over magic!

A report to the economic committee of council this week told how the Department for Communities funded a pilot scheme to remove shutters and to install new facades on four properties – also located along Upper English – with the works carried out between 2019 and 2021.

“This scheme involved the removal of shutters from four properties within the Armagh Conservation Area and their
replacement with new traditional hardwood shop fronts complete with security glazing,” the report to committee explains.

“The scheme further invested in the repair and replacement of timber sliding sash windows to the first and second floors, resulting in a spectacular impact to the streetscape and stimulating further private investment, with three of the four properties now offering residential units above their commercial premises.”

Buoyed by a job well done, council officers engaged with officials from the Department for Communities over the possibility of extending the scheme further into the Conservation Area and supporting the ongoing work of the Armagh Townscape Heritage scheme.

And so emerged a proposal to support six more buildings, a bid submitted for Departmental consideration.

Said considering done, the Department has this week come back and offered £360,000 towards these latest developments, an offer which has been gratefully accepted by council.

All of the properties in question have previously been subject to planning applications – many for mixed-use developments of apartments and retail.

These works, it must be stressed, will improve the outer appearances of the properties, with the actual future uses and internal intentions very much down to the individual owners.

But when all is complete, Upper English Street should once again sparkle and emerge rejuvenated, shaking of its present appearance as a ghost of its proud and productive past.