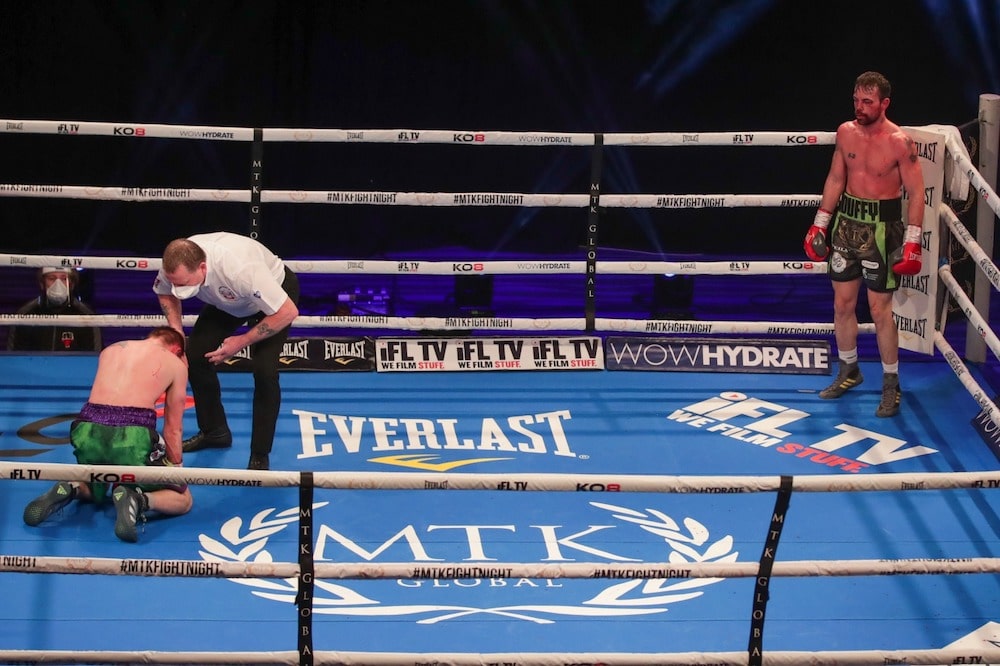 Despite a year and a half out in the cold – pandemic-induced – and three days notice, Armagh boxer Sean Duffy got his professional career back on the road again.

And he did it in style – a shuddering body shot in the third ended opponent Paul Holt’s resistance at the Macron Stadium in Bolton on Friday night.

It was a fourth win in four fights – two by stoppage – as the former Keady ABC amateur earmarks a more productive 2021, and a challenge at a title holder, in the shape of Englishman Danny Carr.

Speaking to Armagh I after the fight, Duffy, was delighted to be back, even if it came with a nasty gash above the left eye.

“We got the phone call on Monday, in the middle of sparring in Belfast, to see if we wanted to take this fight. The weigh-in was Thursday so the turnaround was tight.

“I also had quite a bit of weight of cut – 14 pounds – for a Thursday lunchtime weigh-in, so it left us with three days to cut weight.

“I know a few who said I wouldn’t make the weight and if I did, that I wouldn’t be able to fight, but I knew in my head that I could do it.

“We even agreed to a six-rounder when that was proposed but unfortunately my opponent thought otherwise.”

As for Duffy’s opponent, it may have been a case of when opportunity knocks, but consideration was given to a man who came to win.

“We agreed to the opponent because of his experience; he took an English titleholder in Danny Carr the distance and maybe should have got the decision so we knew he’d be handy. He was definitely a live opponent, a good fighter to come back in after so long out of the ring.

“Ultimately, I’m delighted to get back in the mix – the ring rust was evident, I took a few punches I shouldn’t have. I knew I was hurting him and I felt fine with what was coming back. I could have hit him to the head all day and he would have stayed there so I knew I had to work the body and thankfully that work and game-plan paid off perfectly.

“[Holt] told me after the fight, he was never getting up from that body shot. I’m just happy to be back in the ring again.”

Watch Duffy’s post-fight interview with IFLTV below, as well as the full fight, from 34 minutes of the video below.