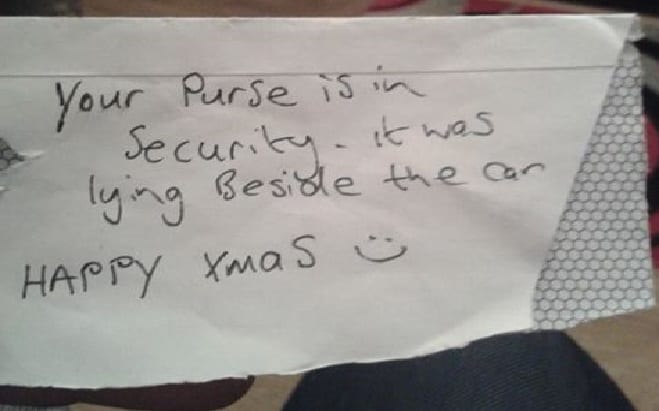 Chrsitmas spirit is well and truly alive in Armagh after a kind-hearted stranger left a note on the car alerting its owner that they had found a purse.

The purse had been dropped beside the driver door of the car in Armagh City Centre yesterday afternoon.

Thousands had flocked to the city for the annual georgian Day celebrations, which is being hailed as one of the best ever.

The note, written on the back of an envelope and attached to the window of the car, simply read: “Your purse is in security, it was lying beside the car. Happy Xmas :)”

Now, the owner of the purse is appealing to Armagh I readers to help find the person that made her day.

The woman has asked: “I would  like to thank the person who found my purse and handed in to security. I’m sorry I didn’t get any name but would love to find who it was so I can thank them personally.