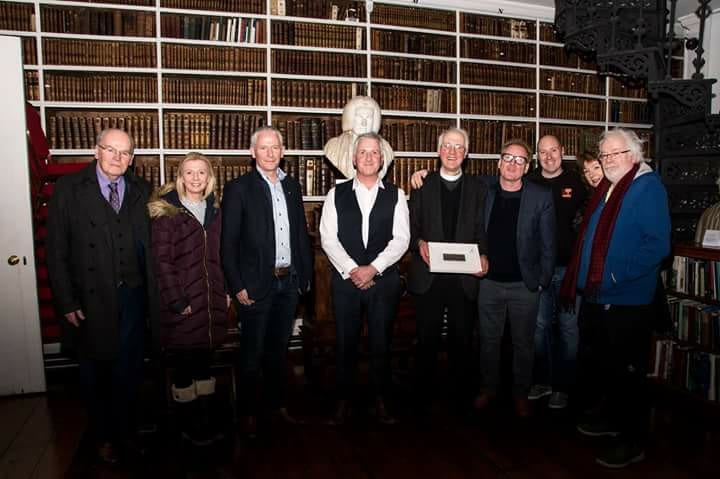 Armagh City’s beautiful public library was the venue for the recent Annual General Meeting of Aonach Mhacha, the Irish language cooperative that has acquired the former fire station in The Shambles, where work on their long-awaited multi-million pound cultural centre is about to get underway in the New Year.

The Library was selected as the venue for the AGM as it holds a unique record of the cultural and social history of 18th century Ireland, reflecting the changing intellectual climate of Europe since 1500.

Dean Gregory Dunstan hosted the AGM attendees and also provided an informative and engaging tour of the facilities to his guests.

The Aonach Mhacha project, which has received widespread community backing, will be situated at the gateway to the historic conservation area of the city.

Once opened, Aonach Mhacha will house a range of services including classrooms, craft studios, performance and exhibition space, a gift shop and café, meeting rooms, cultural enterprise incubation units, a media suite and a day care facility for children and families.

The capital project is sponsored by the Department for Communities, who are lead funders, with additional capital and loans from Ciste Infheistíochta Gaeilge, Ulster Community Investment Trust, ABC Council, Iontaobhas Ultach, Naíscoil Ard Mhacha, Gael Linn, CAIRDE Teo and from the Department for Foreign Affairs.