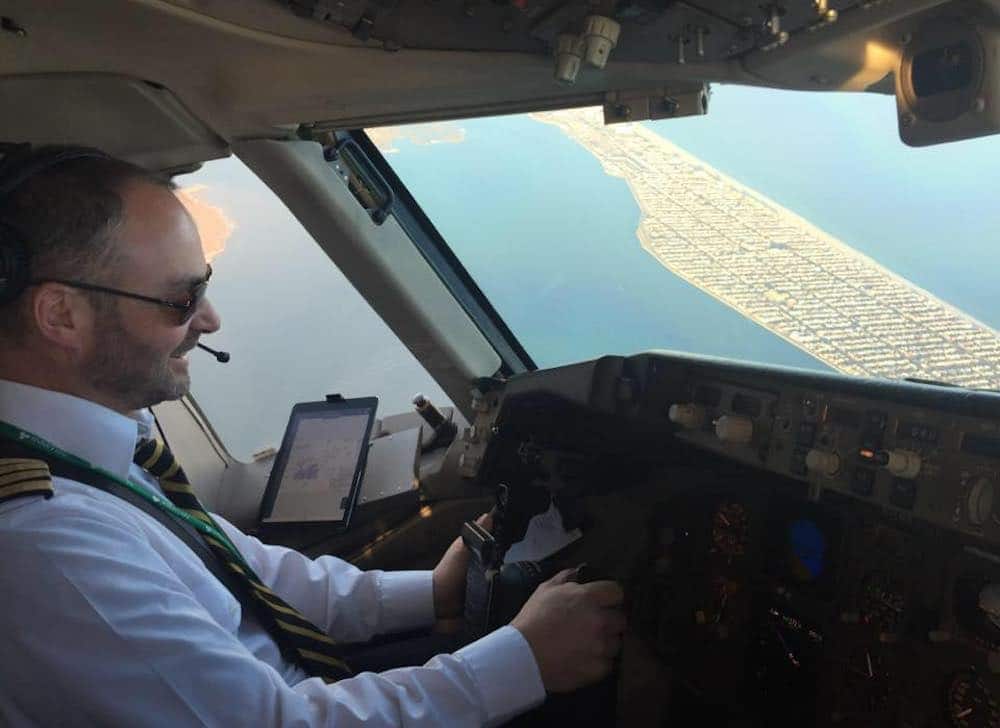 Dad-of-two David, who was married to Kathy, whom he met while working for the airline, passed away at his home at Cherrywood Court in Banbridge on Friday. He was 49-years-old.

David was a son of Mrs Pauline Sleith and Rev Jim Sleith, former minister of 1st Armagh Presbyterian Church, and a dear brother to Karen.

Having trained to become a pilot, his colleagues from Aer Lingus – dressed in their full uniform – formed a guard of honour outside Ballydown Presbyterian Church in Banbridge today.

Meanwhile, friends from Ballydown Motorcycle Club, of which David was a member, paid their own tribute by riding alongside the cortege as he made his final journey to the cemetery.

And having spoken to him last Monday, he said he did not realise how close David –  whose donations in lieu of flowers will be for Leukaemia and Lymphoma NI – was to the end of his life.

David attended Glaskermore Primary School before moving to Banbridge Academy and then the Royal School Armagh, when his father became minister of 1st Armagh Presbyterian Church on the Mall.

Rev Sleith said it was “very fortuitous” when he entered the Combined Cadet corps at the Royal School with an “aspiration to do some flying”.

He said: “He gained a couple of scholarships for gliding and for flying. It’s very important to remember that Jim and Phyllis supported him on what was a strange new venture with no guarantee that things would work out, and not least giving him financial support on a venture that was risky and fraught with uncertainty, but proved to be a winning success.

“Thirty years later and he had a great career in Aer Lingus and it was wonderful to see his friends and colleagues outside in their regalia as we were coming into the church today and also see his biker friends.

“David didn’t just get a career from flying Aer Lingus, the British and Irish routes, the European routes and the worldwide routes. He also gained a wife, because in 1993 when he was in Logan Airport as the third officer on a 747 flight he met Kathy. They got talking and became an item.”

Rev Sleith said the couple had enjoyed “25 years of devoted loving marriage” and had been blessed with two children, Peter and Lauren.

Describing his cousin as a “high flyer but always down to earth”, he added: “David enjoyed sport, he enjoyed rugby, he enjoyed cycling, he enjoyed running. Wherever he went for work he would always seek out a place to go for an early morning run before a flight and was good enough to run marathons in New York and in Rome and in Belfast.

“Motorbikes were his great passion and love beyond his loved ones. Every year that he could he would go to the Isle of Man because the lure of the TT and excitement of those races just did something for him. And he loved the buzz and excitement.

“He went with his friends for many years, often to spectate, and that was good enough, but often to participate. As David would often say ‘well, just give it a go’. David would always give it a go.”

Rev Sleith recalled more recent conversations with David, and revealed he had spoken to him just days before his passing.

He said: “Latterly the last time we really met for a proper discussion face to face was about two-and-a-half years ago at my daughter’s wedding. We hadn’t seen each other for quite a while and it was lovely to catch up and he was still the same ebullient and life-loving and life-affirming David.

“And then the poignancy and tragedy of hearing just a few weeks later about the illness and about not being sure even what the diagnosis was or how to treat it.

“And throughout those last two-and-a-half years David showed grace under pressure in an exemplary way. He never felt sorry for himself, why me?

“He was prepared to try any new drug. It was going to give him hopefully a fighting chance. And he was selfless enough to say even if it doesn’t benefit me and I hope it does, whatever is learned from the researchers and the fellow patients now and in the future that will be a great benefit and blessing. Utter selflessness in the midst of a terrible ravaging disease.”

Rev Sleith said he had enjoyed a “good chat” with David via video last Monday, but added: “I thought there would be time to have more chats. I didn’t realise the end was as close as it proved to be and like all of you I am floored and devastated that that’s the case.”

Rev Sleith recalled fond memories of family Christmasses and of holidays in Europe.

His cherished reflections spoke highly of the type of boy David was and the man he would become.

Said the minister: “Summer holidays in the caravan on the Continent was probably the epitomy of good fun with David. You would go to the shops maybe in Italy somewhere and David would be going ‘Dad, Dad, it only costs 100 lira’, which would be about 5p. And he was always looking for something to get him to buy, that child-like enthusiasm.

“I can remember when Italy were playing Brazil in the World Cup in 1982, the football World Cup, the campsite in Rome, and all the Italian fans were shouting ‘Italia, Italia’. They were playing the favourites Brazil. And there was a break in the play and David got up, stood round and faced the crowds and spectators and shouted ‘Northern Ireland’.

“The people were bemused and then amused and then they fell about laughing. And David just lapped it up. He was beloved by perfect strangers.”

He spoke too of David’s active role within his church life and his pride in his children.

“David was a very proud member of the BB and he was delighted that Peter and Lauren would rise through the ranks of the BB and GB as well, following in his footsteps, throwing himself and themselves into all those activities and a very rich life,” he said. “Just go for it, that was his kind of living motto in his life.”

And Rev Sleith added: “David had a genuine Christian faith, a vibrant living faith. You needed that, in the face of all that he faced in the last two-and-a-half years as well as the times before, a sense of trust, a sense of hope, a sense of giving it a go and not being daunted even against the odds.”

David had specially chosen hymns to be sung at his funeral service, opening with ‘One Day When We All Get to Heaven’ and bringing the service to a close with ‘My Jesus, My Saviour’.

“When we all get to heaven
What a day of rejoicing that will be
When we all see Jesus
We’ll sing and shout the victory
We’ll sing and shout the victory
We will weep no more
No more tears, no more shame
No more struggle, no more
Walking through the valley of the shadow
No cancer, no depression
Just the brightness of Your glory
Just the wonder of Your grace
Everything as it was meant to be
All of this will change
When we see You face to face
Jesus, face to face.”

To David’s wife, Kathy, son Peter, daughter Lauren, parents Jim and Phyllis, sister Karen and the entire family circle and many friends, we offer our heartfelt sympathies at this devastating time.